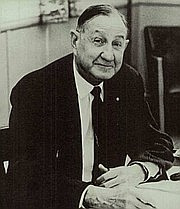 In the aftermath of the controversial decision of the Alexandria School Board in late November to change the name of T.C. Williams High School, I think it is important to remember why the school was named after him. There was a tablet on display in the lobby of the school with a picture of him and an inscription describing the attributes of Mr. T.C. Williams.

It was pictured in the 1975-76 T.C. Williams yearbook and reads as follows: “This school is dedicated in honor of T.C. Williams by the City of Alexandria in grateful appreciation of his many years of dedicated service as Superintendent of public schools. His vision, competent leadership, courage and energy have been major factors contributing to the excellence of public education in this city. November 1965.”

Mr. T.C. Williams died in Alexandria on Feb. 24, 1968 at the age of 73. His death was overshadowed by the traumatic events of that turbulent time, namely the bloody Tet offensive at the height of the Vietnam War. But his legacy cannot be forgotten.