Tents, causes, and horrid tales of the lanternfly highlight the event. 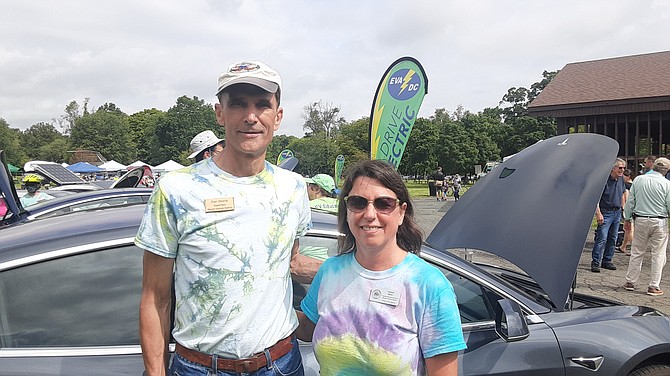 Phantom the barn owl was greeting arrivals at the Third Annual Environmental Expo, held for the first time at Fort Hunt Park. The owl’s handler was telling the story of Phantom, his preferred places of residence, and how to preserve an environment where barn owls live alongside people.

“For some reason they really do like barns and silos,” the handler said, while Phantom flapped his wings, perched on a protective leather glove. 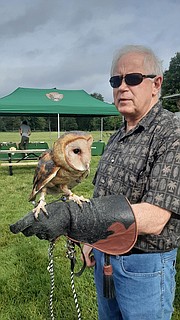 Phantom the barn owl was a hit at the expo.

“These guys like open territory, we’re losing that around here,” he said.

It was the theme for the expo, save the environment, a cause Supervisor Dan Storck (D-Mount Vernon) has stood for throughout his tenure as supervisor.

“The passion we have is so high,” Storck said. “Taking trees out to put in solar panels is a no-no.” He added that the Fairfax County Board of Supervisors is behind in environmental efforts. “We have a board that’s fully committed,” he said, pointing to an effort at the Lorton Landfill to install a five-megawatt solar feed that will provide energy to the surrounding area. “Part of our net zero,” Storck said.

That feeling of environmental hope permeated throughout the expo, which consisted of about a dozen tents for exhibitors near one of the 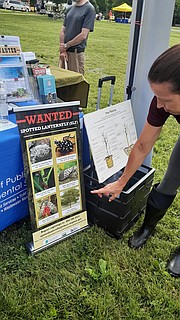 This stand shows the extent of the lanternfly migration, which is an invasive species.

pavilions, plus the Fairfax County Showmobile. A smattering of attendees wore masks. Storck’s office co-sponsored this event with the National Park Service, a natural partnership.

“The small stuff ends up bigger,” said Charles Cuvelier, the George Washington Parkway Superintendent with National Park Service. He pointed to efforts with reusable grocery bags and invasive plant management as steps people could take to help the area. “Educate, raise awareness, to action,” he said.

On one end of the expo, a few electric cars were parked, and owners were highlighting the advantages, while another tent highlighted protecting the water system. Education about the dreaded lanternfly was the topic at another.

June Eakin was in from her home in Maryland to show off her electric Ford Mustang Mach-E, that she and her husband named Marlin. She plugs it in every night and noted that electric cars’ reputation for lacking speed may have been true years ago, that is not the case with Marlin. “It will push you back against the seat if you have a place to do that,” she said.

The Joe Chiocca Band provided the morning’s musical entertainment on stage in the pavilion, and the sounds echoed throughout the expo. They are a group based in Alexandria that hammers out blues, classic rock and classic country. Other venues they’ve played include the Arts on the Avenue event in Del Ray. The band consists of “two Joe’s, two Mike’s and one Randy,” said Joe Wells, the drummer.

This is the third annual environmental expo Storck has hosted, and he plans to continue, hopefully with the National Park Service.