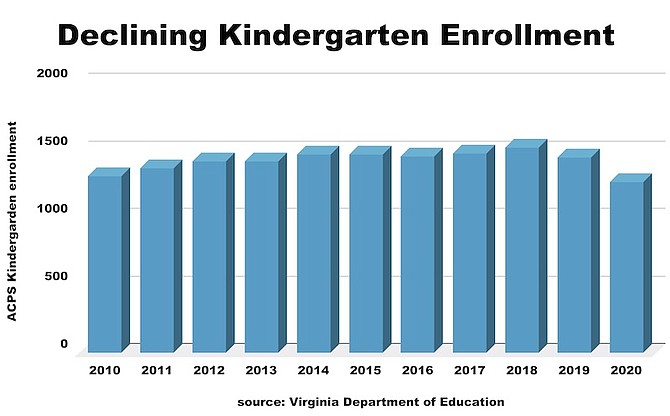 Kindergarten enrollment in Alexandria is down 17 percent since 2018.

"We recently converted an office building into a school. That could eventually be converted back into an office building," said Erika Gulick, director of capital programs at Alexandria City Public Schools. "When we build new school facilities, we're making sure to include community spaces as well as family resources so those programs can sort of ebb and flow."

In the short term, Kindergarten enrollment is expected to go up. School officials are predicting a Kindergarten enrollment of 1,560 this fall, the largest cohort in recent years. But that may end up being the beginning of the end for rising enrollments. Alexandria City Public Schools usually gets about 55 percent of babies born in Alexandria, a metric that school officials call the "K capture rate." Gulick says predicting enrollments for the future requires considering how many babies are born and how many of them will show up for school.

"If birth rates continue to go down but for some reason the K capture rate goes up, we may not see a decline in enrollment," said Gulick.

BIRTH RATES always fall during times of economic crisis. It happened during the Great Depression and again during the Great Recession. But the Baby Boom that happened after World War II didn’t repeat itself when the economy recovered after the recession of 2008. Births in Virginia are now the lowest they've been since the late 1990s, and Virginia's population was 25 percent smaller then.

"Millennials are postponing children or just not having as many," said Hamilton Lombard, a research specialist at the Weldon Cooper Center for Public Service. "They're right in the prime age to have children, and they're not having nearly as many as Generation X has."

"Millennials are postponing children or just not having as many."

When the pandemic initially forced people into lockdown last year, some speculated that all that time couples spent hunkered down would lead to a baby boom. Instead, the opposite happened. The birth rate declined for the sixth straight year in 2020 as the pandemic accelerated the trend of women delaying pregnancy or deciding not to have children at all. Demographers say they'll be looking at what happens when the current crisis is over and millennials feel more confident about the future.

"Are the women who didn't have children during the Great Recession and its aftermath, are they going to have them or not?" asks Kenneth Johnson, a senior demographer at the Carsey School of Public Policy at the University of New Hampshire. "After the Great Recession, things finally were coming back to normal and then COVID hits and yet another reason why people might be concerned about having children."

THE DROP IN BIRTHS is creating a shifting demographic landscape across the country, a trend that is contributing to the aging of the American population. Johnson looked at birth rates in all the states and found that 20 states now have more deaths than births for the first time in history. Virginia is not one of those states, at least not yet. But if current trends hold that won't be the case for long.

"That has really important implications for everything from transportation infrastructure to the types of facilities we need, whether it's schools or health care facilities," said Beth Jarosz, a senior research associate at the Population Reference Bureau.

At first blush, it's a trend that might seem frightening for things like the solvency of Social Security. But Jarosz says there's also a potential upside to declining birth rates.

"As people have fewer children, the resources that are available for those children increases," she said. "Kids get more attention from their parents. They get better attention at school, and there can be positive outcomes from that."