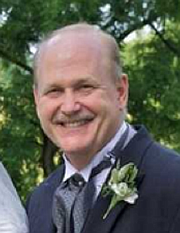 Paul Taylor Myers of Reston died at the age of 69, on July 10, 2021, surrounded by the family he loved. “Tall, strong, ready, and willing to take on every task, Paul was one of those people that you’d think would be around forever. Our community has lost a treasure,” said Carol Nahorniak. Paul is survived by his wife of 40 years, Marion, their three children Katie, Megan, Chris, siblings Chikk Myers, Sheri Myers, Karen Harman, and grandchildren Addy and Merrick Johnson. Paul was a master of many things. He left his handprint in Reston and beyond.

As a young adult, Paul attended Ohio Wesleyan University, where he met Marion Cannon. He joined the OWU men’s lacrosse team coached by his father, Fred. A “fierce competitor” on the team, Paul’s skill and love of lacrosse continued for nearly fifty years. He annually played Grand and Super Grand Masters Lacrosse with the OWL alumni team, the Legends, immensely enjoying the camaraderie of his teammates.

After graduating from OWU in 1974, Paul received his MBA from Ohio State. He and Marion married in 1981 and moved to Reston. Paul owned Bar Trax Solutions, a Reston data processing service, and worked as a government contractor through his business.

“A lot of people in the business community might not feel like they knew Paul well because Marion was the Myers who was always out front and center,” said Karen Cleveland. “But don’t be fooled by that. Paul was thoughtful, super smart, and the backbone of the family and the company. He was immensely talented and had an incredible ability to balance 20 things at once, effortlessly keeping all the trains running on time.”

After retiring, Paul joined Marion’s company, Myers Public Relations, LLC. He became a proficient project-event coordinator, including the Reston Town Center Holiday Parade production voted as one of USA Today’s “10 Best” for the third year in a row in 2019.

Nahorniak said that Paul was their “techie, accountant, and known for his MacGyver skills over his years at Myers PR.” “He took on larger roles on our team as an event-producer extraordinaire - from mastering the construction of hay mazes to the logistics of the Reston Holiday Parade.”

Robert Goudie, Executive Director of Reston Town Center Association said that while they have worked with Myers PR regularly over the years, and Paul contributed in important ways, “it went beyond his professional contributions.” “Paul was good people and will be missed.”

According to Cleveland, “Paul’s love for his family [including his dog] was evident every day and in everything he did.” At home, Paul could be found in the kitchen cooking for his family and his dog, Honey. He spent his childhood summers at freshwater Lake JoSylvia in Contoocook, New Hampshire. It was his favorite place, and he shared its summer joys with his children and grandchildren.

Nahorniak said that in Paul’s devotion to his family and the many friendships he enjoyed, all were enriched by his hospitable nature. “He would gamely don his tuxedo to attend many black tie events with his beloved Marion, enjoying the bidding, and winning at silent auctions.”

“The parade will go on,” Nahorniak said. “And all who knew Paul will be thinking of him every step of the way.”

A celebration of Paul’s life will be held at a later date. Donations in his name can be made to the American Cancer Society donate3.cancer.org.