Falling in Love with ‘The Beautiful Game’
Votes

Falling in Love with ‘The Beautiful Game’ 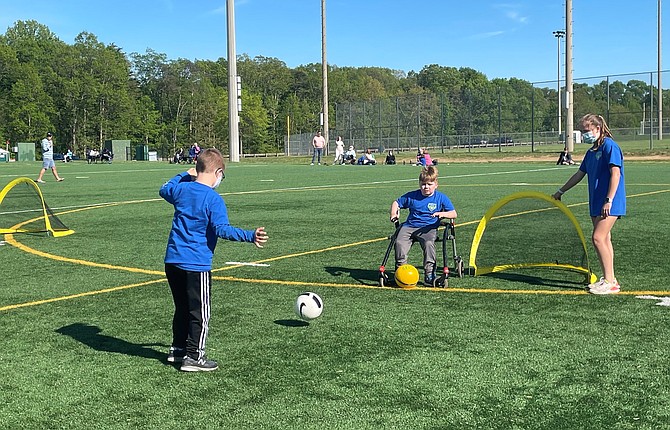 TOPSoccer players practice a drill together as the assigned TOPSoccer Buddy encourages them. Photo contributed 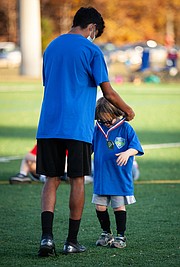 For more than a year, Aeshan Kapil, 16, of Herndon volunteered as a TOPSoccer coach for the Great Falls Reston Soccer Club, U.S. Youth Soccer. He shared his passion for soccer in the program for young athletes with disabilities. Without the opportunity afforded by TOPSoccer, the youth aged 6 through 18 years old might not have discovered and fallen in love with the sport nicknamed “the beautiful game.”

Coach Aeshan said, "I got interested in TOPSoccer because I loved soccer as a kid." Aeshan is a sophomore at St. Paul VI Catholic High School in Chantilly. Initially, he served as a volunteer Buddy to support players in the program. After that, Aeshan received a promotion to Head Coach of Great Falls Reston TOPSoccer.

The allure of soccer calls athletes of all abilities. Soccer, or “football” as it is called internationally, is a simple game. A ball is all players need; no expensive equipment is necessary. The game cracks socio-economic, ethnic, and national boundaries. Soccer needs no common language or extreme physical prowess to be enjoyed by players regardless of ability levels.

Aeshan said at his first practice as a head coach for TOPSoccer, he felt intimidated, not knowing what to expect, what to do, and unsure if he understood the ability levels of his players. "I had no idea what I was doing as head coach. No idea of what drills the players liked, who they were, and their capabilities."

When COVID hit, Aeshan improvised. He created a ZOOM soccer program where everyone turned on their cameras. He demonstrated the drills, one by one, such as passing off a wall. Next, he performed the exercise with them for thirty seconds, stopped, rested, repeated, and move to the next drill.

THIS YEAR, TOPSoccer Great Falls Reston registered a record number of players. "We have 26 kids this year, whereas, in the past, we've had only eight through 10," he said. Holding the program at Lake Fairfax Park in Reston this year, all volunteers wore masks and maintained social distancing as best as possible. Masking for players was optional.

Aeshan said, unlike his first year as a coach when he saw a player's disability first, "sad but true," in his second season as coach, the disability was secondary. Program participants were not disabled players but players with disabilities. The disability is secondary. "[I] don't see them as different," Aeshan said.

The best part about the program for Coach Aeshan, he said, was offering the youth and teen players the opportunity to play the game, love the game, and watch his kids grow in skills and teamwork.

As the spring season wound down, the players' parents shared a few comments about Coach Aeshan and TOPSoccer. "You were well organized, and it was a great opportunity for the kids," said Chirs Gibson of Oakton. "You are very kind," said Eddie (last name withheld) of McLean. "My two absolutely love it, and it brings them a lot of joy and exercise," said Margaret Johnston of Arlington.

"I keep flipping through the pictures – I just love them. And yet, I feel such a sentimental sadness that the season is coming to an end. This has been such an incredible experience for [my son], and we are so grateful for everything you've all done to give [him] a moment of fun and normalcy in the otherwise trying time," said Melissa Sergio of Arlington.

EVERY TIME players scored a goal, every time they dribbled through cones, Aeshan said the players' smiles on their faces touched him. "I feel blessed," he said. But what mattered most to Aeshan, he said, was what he saw happening after his kids missed a goal. "[At first], they're genuinely, genuinely upset. But then they're okay because we are going to work together. We're going to score another one. That's a real, real privilege to watch them do that. I think that's the best part of the whole program," Aeshan said.