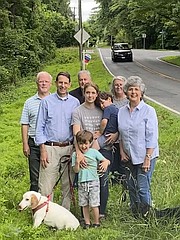 (From left front to back) Great Falls residents –Garrett Tarpley, Dave Marcille, Erin Tarpley, Logan Tarpley, Shirley Bass, Bill Canis, Peter Falcone, and Jennifer Falcone – opposed to the approval of a special permit for the construction of the residential building at 815 Walker Rd., Great Falls for up to 12 unrelated adult female residents of the Stonecrest Home Arts, Inc. gather on the trail in front of the site. 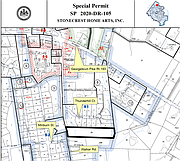 On June 9, the Fairfax County Board of Zoning Appeals (BZA) held a public hearing on the application SP 2020-DR-105 by Stonecrest Home Arts, Inc. The applicant requested special permit approval for the construction of the residential building at 815 Walker Rd., Great Falls, for up to 12 unrelated adult female residents of Stonecrest. Stonecrest Home Arts, Inc. is a 501(c)(3) organization affiliated with Opus Dei, an institution of the Catholic Church.

The Department of Planning and Zoning issued a Use Determination on February 28, 2020, signed by Austin Gastrell, Planner II, that the proposed residential building had been deemed a “convent, monastery, seminary or nunnery” use, which was permitted in the R-1 district with the approval of a Special Permit (pursuant to Section of 3-103(2) of the Zoning Ordinance). The County approved a similar residence for men in Reston on Old Reston Avenue.

ACCORDING TO THE APPLICANT, residents of the proposed facility shared a common faith. At the existing facility in Washington, D.C., residents are long-term, typically ten or more years. Many of the residents have full-time occupations. They are looking to relocate to be closer to the communities they serve. Staff recommended approval with the adoption of Proposed Development Conditions contained in Appendix 1 of the Staff Report.

Sunny Yang, Department of Planning and Zoning said 3.9 acres of the 5.01-acre parcel was subject to the special exception, the site zoned R-1, and surrounding properties developed with single-family detached dwellings. The applicant requested to construct a 14,500 square-foot building, and with determination most similar to a convent, in an R1 district and with special permit approval, such was permitted.

Yang said the site would not host programs or other events for the wider organization or public. It would be accessed from a single entrance from Walker Road, provide ten outdoor parking spaces, and an eight-foot-wide asphalt trail across the property’s frontage on Walker Road.

“The building would resemble a large single-family colonial style dwelling,” said Yang, with the property served by public water and private sector septic. Seventy-five percent of the site was proposed to be open space with trees outside the area of clearing and grading preserved. The applicant requested a modification of the transitional screening requirement along all property lines to allow existing trees supplemented by new plantings to satisfy the requirement.

Fairfax County Department of Transportation spokesperson said that access to the property on Walker Road would be from its highest point on the frontage, with more height added “to allow for minimum sight distance in both directions.”

Mark Looney, Cooley LLP, spoke on behalf of the applicant. He said that since the Zoning Administrator determined that use was most similar to a convent, “no appeal was taken, no change of mind of the zoning administrator, and so for purposes of the conversation today is in your parlance.” Looney said the volume of trips in and out would be similar to three single-family houses.

SPEAKER Jennifer Falcone representing the Great Falls Citizens Association said they opposed the application based on the fact that it was most similar to a convent. “There is no evidence in the record that the requirements to establish a convent have been met...We believe that this use determination provides a flawed basis to evaluate this application.”

Shirley Bass, resident of the adjacent Thunder Hill development said while many of her concerns were traffic-related, she opposed the facility due to its “character in size, scale and density of population in the facility...not in alignment with the Comprehensive Plan for the district.”

Brian Tarpley, resident of Thunderhill said the facility was not compatible with adjoining single-family homes. “It is so uncharacteristically large it will negatively impact property values for homes in my neighborhood,” he said.

David Marcille said the facility met more the definition of a group home and would set a precedent for further development to change and alter the character of Great Falls.

George Kelly, Village Green Day School Board of Trustees said in a letter that the planned Stonecrest driveway would create a blind spot along Walker Road. Thunderhill Court families crossing could not see oncoming traffic from the driveway.

Jonathan Zischkau of Washington, D.C. spoke on behalf of his long neighbors, Stonecrest. “I can say based on 30 years of experience that Stonecrest imposed no traffic on our neighborhood any different from any other homes...They have been incredibly caring neighbors. You will not find better neighbors than our friends at Stonecrest.”

Kimberly Cynkar of Great Falls wrote to the BZA saying she believed from knowing the women of Opus Dei that “they will keep the property well and that they will be very good neighbors not only to those living close to their property but to the entire community as well.”

Anna Freska of Great Falls wrote to the BZA as a business owner with an office steps from the proposed project. “They are most responsible...care deeply about preserving the beauty of the environment. Their presence will actually improve the particular location so near to our Village Centre.”

BZA Board Member James Hart said with the amount of correspondence and testimony, he wanted to see the site himself “on the ground, with the benefit of that testimony.” “There needs to be some additional discussion on some of the conditions and with the applicant as well,” Hart said. The Board unanimously approved to defer the decision to June 30, leaving it open for written comments.