Arlington Naturalists Unite in Common Cause

Japanese Knotweed crowds out native growth along the Potomac 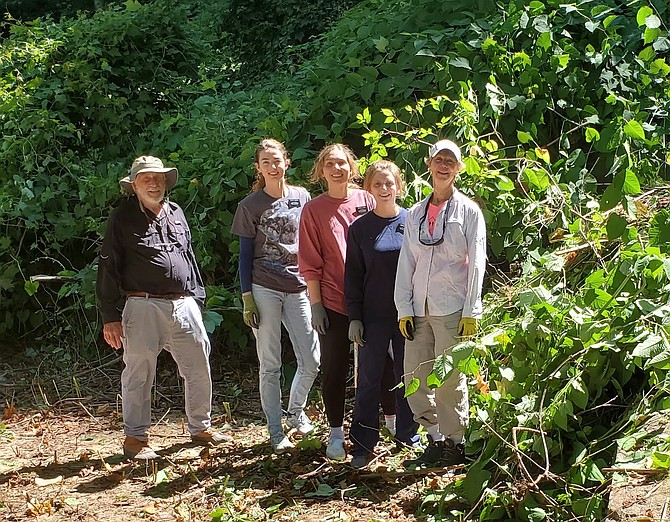 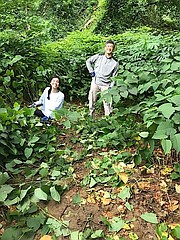 Darren Seah and his daughter, Natalie, clear Japanese knotweed at Long Beach, the heaviest infestation along the Potomac.

It is 6:15 a.m. as Kit Britton heads for the Donaldson Run trailhead where he will have a 45-minute hike to the Potomac River. A group of volunteers will join him throughout the day to remove invasive Japanese knotweed, which has taken over a stretch along the river.

Britton says the knotweed blankets the ground with plants 4-5 feet high. “Nothing can grow under it. It envelops trees and grows very fast.” Knotweed was introduced from eastern Asia and has acquired a reputation as one of the most tenacious invasive plants.

The task for the day is to eliminate the knotweed from a stretch up the riverside from Gulf Branch to Donaldson Run. It is tough going with eight or nine rock outcroppings interspersed with sandy beaches. “This means clamoring over rocks, difficult and high with a trail over it.”

The project had been delayed for a week due to high water on the Potomac and muddy trails, but enthusiasm runs high. Britton has brought together a group of naturalists with specific but overlapping interests in a Park Service-sponsored project. The Potomac Appalachian Trail Club (ATC) volunteers are interested in clearing the trail, which has been overrun by the knotweed “so they were out in force.” The Park Naturalists are interested in removing the plants that are strangling the trees.

A group of neighborhood volunteers are helping clear the area where they normally take their walks. And a group of Mormon volunteers, who could not fulfill their normal missionary work out in the community due to the pandemic, volunteered with the parks instead.

Gary Shinners, a park steward at two parks, works with the Mormon youth on park projects. He says, “They came last week and did prep work on the area to be cleared today. They are the most amazing young people.” Shinners says he worked with them on a project at Jamestown Park where they transformed the area. Most trees had been strangled, starved for sunlight. “The volunteers absolutely tore out every single one of the vines and transformed a tropical jungle into a meadow area.”

Britton has arrived early at the river checkpoint to coordinate signing in the volunteers, providing them with gloves and tools and giving instructions. “This involves cutting artfully, piling it high on the rocks, or sweeping it up and putting in contractor bags.”

The volunteers gradually arrive, wearing long-sleeved shirts, pants and sturdy shoes. “The ticks are all over, and they love to hide in the knotweed.” Some volunteers have arrived with first aid kits and poison ivy lotion.

John Moreland, an Appalachian Trail Club volunteer there with his group of seven says, “We had to carry the knotweed above the water line so it wouldn’t reroot and could die on the rocks. We put our arms around these big bundles, sometimes 8-feet high and carried it up.”

He says it was crowding out the native plants like bluebells and other bushes with berries that are a favorite for birds.

Moreland said because his group are hikers, they were assigned to the area closer to Gulf Branch down the way. Moreland has been volunteering with the Appalachian Trail Club for many years. “I just love the idea that you can go down to the Potomac and it is pristine with no development, tranquil in the middle of a metropolis.”

Britton says along the river they had to rake up the debris so if the water rises, a fragment doesn’t get washed downstream and cause another infestation. “If even a fragment of a leaf drops, it will grow.”

Shinners says, “I was the bag man. I arrived at 8 a.m. with most of the tools.” Moreland says they couldn’t use mechanical tools, which spit out little pieces that could easily reroot. “So we used handheld wedge clippers and long and short handled loppers.”

At 2 p.m. most everyone has left. Shinners says, “I was the last one there. I was little lonely the last hour, but I wanted to be sure we clipped every last one.”

Britton estimates they got about 80 percent of the knotweed and will have to return to finish the raking. After six weeks the Park Service will come in and spray where they cut. “With that one-two punch, we hope to get them.”