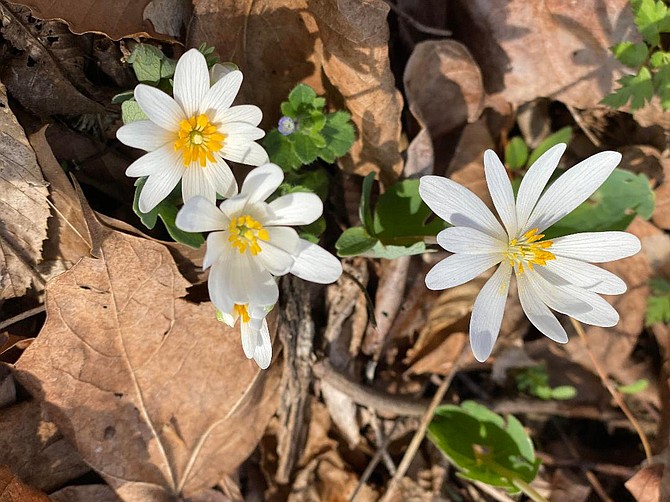 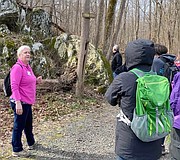 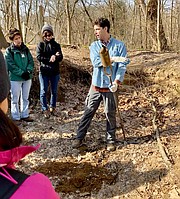 Early wildflowers greeted the spring class of Fairfax Master Naturalists during their first field trip to Riverbend Park on March 14. The park, located along the Potomac River in Great Falls, provides an opportunity to learn the geology of the Potomac Gorge and to view rocks which are part of the Mather Gorge Formation in the upper reaches.

Geologist and group instructor, Cynde Sears, explained that rock formations visible here likely were formed by the same geologic events that produced the Appalachian Mountains about 480 million years ago. Through woods blanketed with wildflowers, including Virginia bluebells, spring beauties, and bloodroot, the group walked to large metagraywacke formations.

Sears explained the formative forces of the rocks composed of quartz, feldspar and mica. Over millions of years, such rock is broken down into soil by the chemical processes of simple lichen.

Soil composition was part of the morning lecture. Soil scientist Dan Schwartz, with Fairfax County’s Soil and Water Conservation District, pulled core samples to illustrate the levels or horizons of soil. Soil is composed of varying amounts of sand, silt and clay present in four soil horizons: an organic rich surface layer, clayey, a layer between oil and rock, and solid bedrock. Master Naturalist students observed the differences in color and composition in layers from core samples taken at river level and higher on the river ridge.

The Virginia Master Naturalists is a community-based natural resources program with chapters across the Commonwealth, including the Fairfax group. Volunteer educators, citizen scientists, and stewards help conserve and manage natural resources and public lands. Membership is open to all by application, usually twice per year. Certification requirements include an extensive training course, and 40 volunteer hours and 8 continuing education hours, per year. The initial program typically takes 6 - 12 months to complete. In 2019, approximately 3,350 members logged 191,202 service hours in a variety of education, stewardship, and citizen scientist-monitoring programs.

The current spring class meetings are impacted by the health crisis. The group will explore on-line training options going forward; their March 28 field trip to Huntley Meadows to study Ornithology and Herpetology has been postponed due to the limit on gatherings of more than ten people. Park trails, such as those at Huntley Meadows and Riverbend remain open to the public.