Virginia Journalist of the Year
Votes

Virginia Journalist of the Year 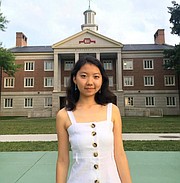 Photo courtesy of The Highlander

McLean High School senior Marina Qu has been named the 2021 Virginia Journalist of the Year by the Virginia Association of Journalism Teachers and Advisers. Qu serves as editor-in-chief of The Highlander newsmagazine and The Tartan literary magazine; she has been on both publications’ staff for three years.

In her Journalist of the Year portfolio, Qu wrote, “Our role as student-journalists did not diminish in spite of the global emergency that was unfolding—our responsibilities were heightened. We overcame challenges that we didn’t know we would ever face. And we did it against all odds.”

Qu will compete for the Journalism Education Association’s national Journalist of the Year award, to be announced in April.

According to her profile in The Highlander online, “Marina Qu enjoys writing about local news relevant to the community and collaborating with other reporters. Outside of journalism, she loves to spend time with her little sister Regina and taste food from around the world!”

Pratika Katiyar, the editor-in-chief of tjToday at Thomas Jefferson High School for Science and Technology, came in second in the Virginia competition.