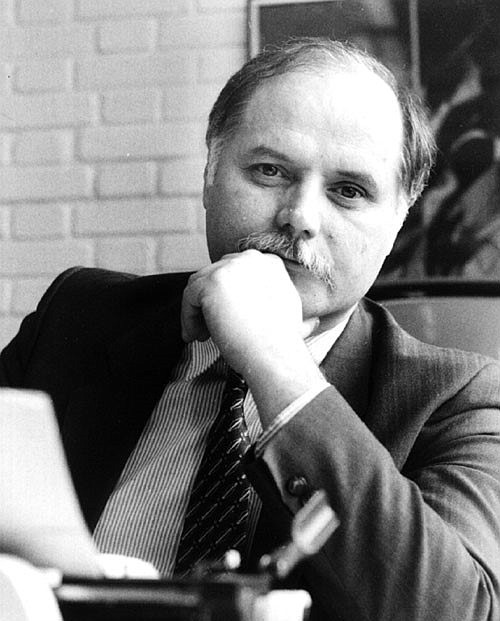 Kemal Kurspahic, the managing editor of The Connection Newspapers, died unexpectedly Sept. 17 as a result of a stroke he suffered after a minor surgery. He was 74.

“We are heartbroken and devastated,” said Connection Newspapers publisher Mary Kimm. “There aren’t words for what having Kemal as our heart and anchor at the Connection has meant to us, or how crushed we are by losing him.”

Kurspahic was the acclaimed editor-in-chief of Oslobodjenje, Sarajevo’s daily newspaper, from 1988-1994. He oversaw the publication of the newspaper during the three-year siege of the city in the 1990s. During that time he survived serious injuries suffered during a car crash while under intense sniper fire, an incident that would leave him with a lifelong limp. 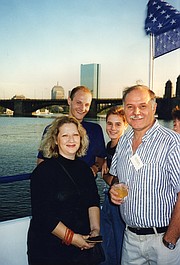 Kemal Kurspahic with sons Mirza, left, and Tarik at J. Gilberts in McLean.

“Global journalism lost a hero today,” said NPR correspondent Tom Gjelten upon learning of Kurspahic’s death. “He published Sarajevo’s newspaper every single day during the siege, holding a multiethnic staff together in the midst of interethnic strife.”

In December 1988 he became the first editor-in-chief elected by the editorial staff of Oslobodjenje.

Under his leadership, the paper waged three battles for freedom of press: breaking from the League of Communists control; defending its independence against nationalist parties in power in 1991; and publishing daily from an atomic bomb shelter during the siege of Sarajevo, 1992-1996.

For his efforts, Kurspahic received numerous awards, including the Courage in Journalism Award in 1992 (International Women’s Media Foundation); the International Editor of the Year (World Press Review) and the Bruno Kreisky Award for Human Rights in 1993; the World Press Freedom Hero in 2000 (International Press Institute); and the Dr. Erhard Busek Award for Better Understanding in the Region in 2003 (South Eastern Europe Media Organization).

“Dad was always looking to make the world and his community a better place and journalism was his tool to do that,” said Kurspahic’s son Mirza. “Bringing together good people that had a similar mission in their lives was what we were exposed to all along and because of that we owe a great debt of gratitude to him. We learned from him and everyone that he has been involved with how to try to make our own communities a better place.”

In 2000, Kurspahic was named one of the 50 Press Freedom Heroes from the last 50 years by the International Press Institute, citing "significant 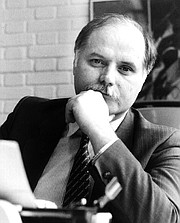 contributions to the maintenance of press freedom and freedom of expression" and "indomitable courage.”

“It’s easy to see he was a hero to many but the humility he displayed taught us to be humble as well,” Mirza Kurspahic added. “It is difficult to stay humble but he made that look so easy. It came natural to him – to never look down on anyone and always offer a helping hand.”

Kurspahic was a Nieman Fellow at Harvard University, a Clark Fellow at Cornell University, and a Senior Fellow at the U.S. Institute of Peace. He held lectures and seminars at universities across the U.S. and advised the highest-level decision makers of U.S. foreign policy, including President Bill Clinton and then-Senator Joe Biden.

Kurspahic served as the Managing Editor of The Connection Newspapers in Northern Virginia, 1997-2001 and again 2007-2021. Former editor Steven Mauren was a longtime colleague of Kurspahic. 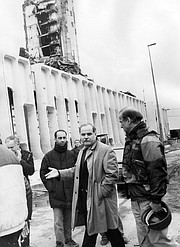 Kemal Kurspahic, center, welcoming then-Senator Joe Biden to the ruins of the bombed headquarters of the Sarajevo newspaper Oslobodjenje in 1993 at the frontline of the besieged city.

“When publisher Mary Kimm first received Kemal’s resume with his international stature for a position as a community newspaper editor at the Connection, she thought we could benefit just from meeting him, never thinking he would join,” Mauren said. “He did; and our newsroom benefited inestimably from his depth of experience, his collegial leadership, and his always unruffled, reassuring demeanor.”

Kurspahic was the Chairman and Founder of the Media in Democracy Institute, based in the Washington, D.C., area and the author of four books.

As a diplomat he worked for five years (2001-2006) for the United Nations Office on Drugs and Crime, first as the Spokesman in Vienna and then as the Caribbean Regional Representative, responsible for 29 states and territories.

Kurspahic is survived by his high school sweetheart and wife of 52 years Vesna Kurspahic, their two sons Tarik (Mary Beth), of Lexington, Mass., and Mirza (Kristine), of Centreville, and four grandchildren (Andrew, Brynna, Rory, and Nev).

“Having a leader like Kemal in our newsroom was special magic,” Kimm said. “He was always teaching, sometimes directly, always by example. He embraced community journalism and helped reinforce how important local reporting is to the community.”

Added Kurspahic’s son Tarik, “Dad was always surrounded by brilliant people in all sorts of different fields. We are grateful to have been able to travel all over the world following his work, giving us such a broad perspective on life. But in the end to us he was just ‘Dad,’ larger than life and to me my hero.”

“Global journalism lost a hero today. Kemal Kurspahic, the legendary editor-in-chief of Oslobodjenje, Sarajevo’s daily newspaper, died as an exile in northern Virginia after suffering a stroke following minor surgery. I met Kemal in Sarajevo in 1993. He oversaw the publication of his newspaper every single day during the three-year siege of his city by murderous Serb nationalists who were determined to shut the city down. Kemal negotiated with the U.N. for newsprint and with local warlords to get fuel on the black market to keep his presses running. He promised his staff that Oslobodjenje would continue publishing “as long as Sarajevo exists,” and he kept that promise. The paper got smaller and the press run was limited, but Oslobodjenje under his leadership became a symbol for Sarajevo of its own determination to survive. But not just as a symbol of perseverance. It represented as well the city’s commitment to its own multi-ethnic identity. A Muslim married to a Serb, Kemal presided over a multi-ethnic staff, and the newspaper thereby stood for Sarajevo’s remarkable cosmopolitan character. He also insisted that his reporters tell the war story honestly and accurately, even when it meant challenging his own government’s interpretation of events. I was so inspired by the Oslobodjenje story under Kemal’s leadership that I wrote a book about it, seeing its struggle as representing the ideological element of the larger Bosnian war story. After suffering grievous injuries during a car crash under intense sniper fire, Kemal went into exile and wrote his own book, titled appropriately “As Long As Sarajevo Exists.” Remarkably, he ended up in northern Virginia as editor-in-chief of the Connection newspapers, serving a suburban DC population that exemplified the same multi-ethnic character he had defended in Bosnia. His journalistic and human values are an example for journalists everywhere. RIP, Kemal.”