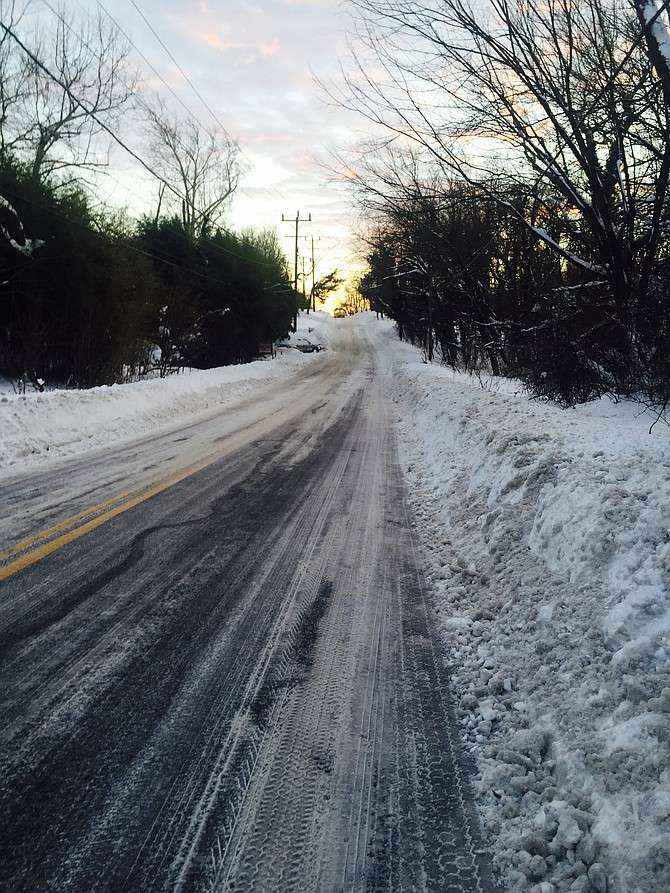 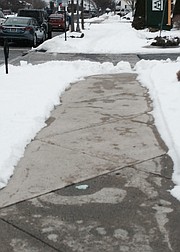 “By clearing snow from streets but leaving sidewalks to private property owners, the county sends a clear message that pedestrians aren’t a priority.”

As cherry blossoms bloom, memories of winter linger for some, because snow storms, although occurring only a few times a year, cause frustrations, hardships, danger as plows push snow on top of sidewalks.

“The snow and ice then form literal barriers to then getting around and those piles sometimes last for weeks, sometimes even months. We need to stop treating sidewalks as storage facilities for snow and start treating them as important links to our transportation network,” said Alison Gillespie, at a public hearing before the council on Tuesday, March 16.

“It is a particular hardship to those with physical disabilities. I have seen wheelchair users using traffic lanes in the middle of snow storms when snow is falling and visibility is low. People who are blind often depend on sidewalks and often encounter snow in unexpected locations making their routes to work difficult or nearly impossible,” she said. “We should not need to own a car in this county simply because of snow.”

The purpose of a bill, introduced by Evan Glass (at-large), is to increase safe access and passage for pedestrians because of snow and snow clearing. Blocked sidewalks pose a safety hazard and impedes pedestrian ability to access bus stops, metro stations, retail stores and places of employment, according to Council documents.

“By clearing snow from streets but leaving sidewalks to private property owners the county sends a clear message that pedestrians aren’t a priority,” said Jane Lyons, of the Coalition for Smarter Growth.

ABOUT 81,666 RESIDENTS in the County use public transportation to commute to work, and about 12,381 residents walk to their place of employment, according to the 2019 American Community Survey (ACS) and reported by the Montgomery County’s Office of Legislative Oversight.

About 47% of Ride On users had annual household incomes less than $30,000, according to a 2020 survey and the Office of Legislative Oversight.

“This is a really important bill. It only comes up a few times a year but when it does come up, it’s a huge problem... it is a huge social equity and racial justice issue,” said Kristy Daphnis, of the Pedestrian, Bicycle, and Traffic Safety Advisory Committee. “I see this every winter as people try to navigate our streets and it is a problem that is easily solved.”

Under the bill, specifically, the Executive must implement and require the County’s Department of Transportation to remove snow and ice from “orphan sidewalks.”

The bill would also require the County to clear non-buffered sidewalks or paths in the nineteen (19) busiest arterial roads that lie within the County’s equity emphasis area.

“Currently, the County clears over 60 miles of sidewalks in urban districts where there is no adjacent private property or commercial property owner; however, this bill would expand the coverage to include the County’s equity emphasis areas along certain arterial roads,” according to council documents.

“SNOW DAYS ARE A PRIVILEGE not afforded to most people who work essential jobs,” said Shruti Bhatnagar, of the Sierra Club. “In our focus to provide safe roads for cars and busses we have ignored and made more unsafe the access to those busses for pedestrians.”

“We need to provide equitable services for all county residents,” she said. “Snow on sidewalks is a hindrance to pedestrians and people with disabilities and seniors for whom accessibility may be more challenging, putting their safety at the greatest risk.”

Hannah Henn testified for county executive Marc Elrich. “The county executive supports the underlying objective of ensuring that sidewalks are cleared during and after snow and ice events to improve safety for pedestrians,” she said.

But the bill could cause complications and confusions, according to Elrich and Henn.

“The bill picks winners and losers by specifying geographic limits at a moment in time. It is not clear from the bill how or why these routes, particularly State-maintained routes, were selected compared to other potential areas, such as MD 190/River Road in the Westbard area and MD 390/16th Street,” said Henn.

“We anticipate confusion among property owners because of the differential services proposed. There will be a need for education and outreach to provide clarity to property owners on snow clearing responsibilities,” she said.

A Transportation and Environmental committee work session will be held on the bill later in the spring.