Workhouse Arts Center is Opening to Commercial Entities as Attractions

A restaurant and brewery were among the desired occupants they are seeking. 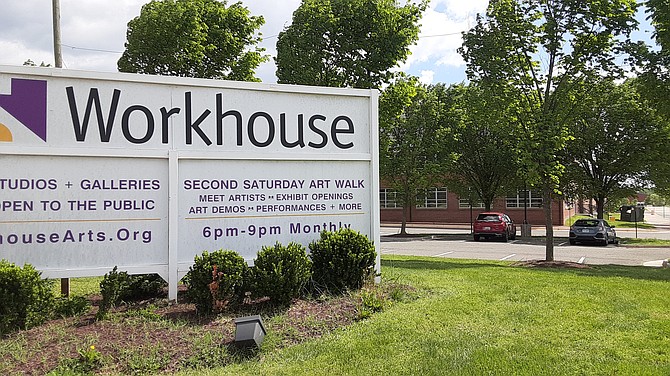 To attract people, the Workhouse Arts Center is looking to open up some vacant buildings to commercial entities such as a brewery and restaurant. Photo by Mike Salmon.

In the southern part of Fairfax County, the Workhouse Arts Center is preparing to expand in a commercial direction to include a restaurant, brewery or other small business that should increase the foot traffic to this county entity. Opportunities are available to lease two vacant buildings at 9514 and 9517 Workhouse Way, totaling 4,500 square feet of commercial space.

It will be a welcome addition, says Kristen Morsches, who has had a studio in the ceramics building over the past four years. “I think it would be

This artists rendering shows what it might be like when commercial businesses come to the Workhouse, bringing in more crowds.

awesome, it would bring a lot of people,” she said. “We’ve always wanted some other draw,” besides just the art, she said, adding that it might bring young people too. She said the foot traffic had been increasing until the pandemic and this could reboot the trend.

The two buildings the new tenants will occupy are the closest buildings to Ox Road out in front of the workhouse. They are all-brick buildings, like the rest of the Workhouse.

According to Sharon North, the Section Chief of Communications for the Fairfax County Department of Public Works and Environmental Services, a commercial entity at the Workhouse is part of their ongoing plan to create a destination "with unique economic development opportunities," she said, via email. "We continue to evaluate land use options to further activate the site in pursuit of this goal," she added. "The renovation of W13/W15 for tenant fit out and use as food establishments is yet another step in creating a mix of uses, activities and community experiences."

There is access to the Workhouse from Ox Road, which is a major thoroughfare from Occoquan through Fairfax County, and Lorton Road, which links directly to Richmond Highway. The site is surrounded by big parking lots too.

This is one of the buildings officials are planning to open up for commercial entities.

"This is an exciting opportunity for new partners to join the vibrant Workhouse community and continue the placemaking that the county began over a decade ago," said Fairfax County Supervisor Daniel G. Storck (D-Mount Vernon).

The walls of the restaurant and brewery could be a place where the artists can exhibit their work, like is seen on the walls of other eateries and county municipal buildings in the area.

The Workhouse started as a prison over 100 years ago when President Theodore Roosevelt was in office. The District of Columbia Jail was experiencing over-crowding and unsanitary conditions so the Congress approved the purchase of a 1,155- acre tract of land north of the Occoquan River. The first prisoners arrived in 1910, built wooden structures from trees along the bank of the river which were replaced by brick structures in the 1920s. It became overcrowded in the 1990s and Federal legislation required the Lorton Correctional Facility to be closed by Dec. 31, 2001, Workhouse information says.

In 2002, 2,324 acres were sold to Fairfax County for $4.2 million, and plans were underway to transform it into a cultural arts center, which opened in September 2008. The Workhouse currently consists of six artist studio buildings, supporting more than 100 artists by providing them affordable studios and galleries. In addition, there is a theater, classes, and the Lucy Burns Museum.

The Workhouse Arts Center is operated by the Workhouse Arts Foundation, Inc., a not-for-profit 501(c)(3) corporation in the Commonwealth of Virginia. The organization survives on income in the form of tuition and ticket sales, donations from the surrounding community and DC Metropolitan Region, and in-kind support from Fairfax County, it said on the website.