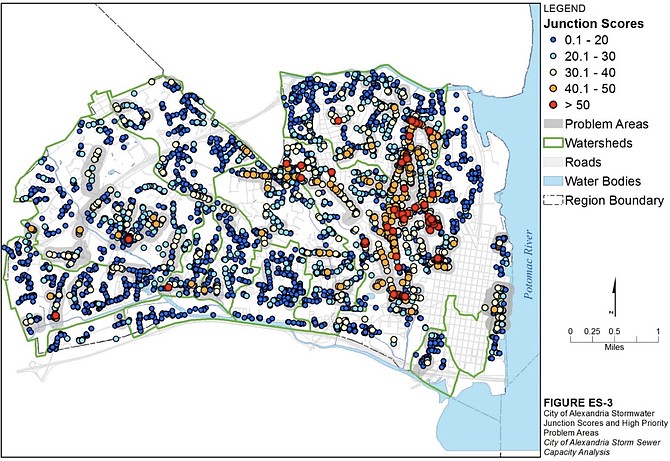 The City of Alexandria Storm Sewer Capacity Analysis identified 90 problem areas in the city and outlined a $61 million plan to fix them.

None of the candidates for Alexandria City Council are for flooding, which has swamped the city's aging infrastructure in recent years as a series of major storm events have repeatedly submerged parts of Alexandria. Many Alexandria voters want answers, and candidates are offering a variety of approaches — everything from high-tech water monitoring and pervious streets to marking storm drains and addressing the mental health burden of living in a city where a 100-year flood seems to happen more than once a year.

"Norfolk has led with some technology they put in their pipes that they can tell which ones are full and which ones aren't, and they can shift demand in real time," said James Lewis, one of the 13 Democrats running in the June 8 primary. "That's something we're already doing with traffic in this city, and it's a small short-term investment that's relatively cheap."

When asking about flooding during a recent forum hosted by the Alexandria Democratic Committee, several candidates pointed to a 2016 storm sewer capacity analysis that identified problems and prioritized solutions. The City of Alexandria Storm Sewer Capacity Analysis, which the candidates often refer to as the "CASSCA" study, identified 90 problem areas and outlined a $61 million plan to fix them. Alyia Gaskins said the city should combine data from the study with pictures from residents and real-time data to form a plan that combines long-term solutions with short-term fixes.

"I've been on walks with residents where they say we know these are long-term projects, but we also need help today in terms of helping mark our storm drains so when we're going out in the middle of the night it's safer for us because we know exactly where we're headed," said Gaskins. "We need help blocking off streets so when there's a major rain when a car comes through it's not pushing more water in."

THE FLOODING PROBLEMS may end up being a wedge issue in the campaign, and incumbents are going to need to defend their time in office. Mark Shiffer suggested that the city should create policies for new development, and Kirk McPike said the city could ask more from developers to remediate flooding and stormwater runoff. Perhaps the sharpest attack on the incumbent council members came from Bill Rossello.

Earlier this year, the Alexandria City Council voted 6-to-1 to double the stormwater utility fee in an effort to raise an additional $15 million a year to help finance the infrastructure investments. John Chapman and Canek Aguirre voted in favor of the increased fee; Amy Jackson voted against it. Council members also created an advisory group to help oversee how that money is spent, and effort to increase transparency and oversight.

"I think the city needs to do a better job of explaining our policies, and when we're doing development that these infrastructure improvements are actually happening," said Aguirre in response to Rosello. "When you see a building go up, you're like, 'Oh it's going to make everything worse.' But there's actually infrastructure underneath it that makes it better."

SEVERAL CANDIDATES emphasized the new funding that may soon be available from the federal government through the American Rescue Plan. Kevin Harris talked about his experience hearing about flooding problems from public housing residents, and Bill Campbell talked about his experience working on the School Board to expand the capital improvement program. Patrick Moran pointed out the city's hiring freeze has left stormwater management positions unfilled, and he suggested new best management practices should be implemented along city streets.

"Our roads shouldn't be getting repaved to be asphalt.'' said Moran, adding that flooding was a catalyzing issue that got him involved in the race. "They should be permeable."

Councilman John Chapman praised the city's new grant program to help residents make property improvements, and Councilwoman Amy Jackson praised the citizen groups advocating on this issue. Meronne Teklu said the city should use data-driven decision-making to predict when parts of the city will be flooded, and Sarah Bagley talked about the strain on mental health this issue causes for many residents who live in a perpetual state of fear.

"One thing that shouldn't get lost in this is short term relief for people who are worried about losing their insurance due to the number of claims," said Bagley, "who are having to make choices about whether they file a claim or not, who are having to dip into savings to decide to install things they need preventatively."

On Monday, May 24, Agenda Alexandria will host a panel discussion to talk about the problem of flooding in the city. Panelists include: