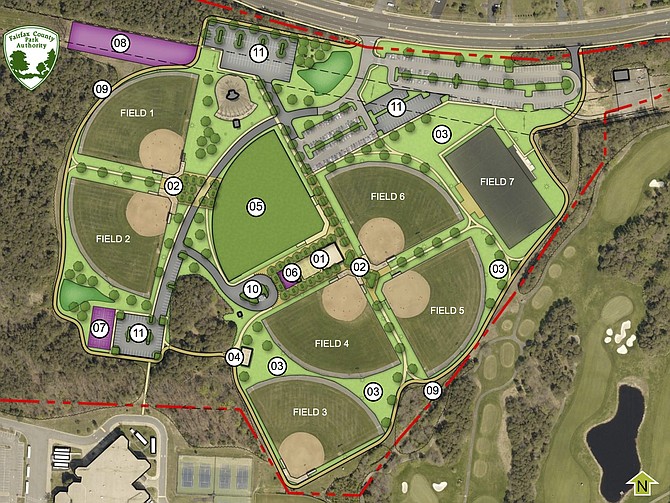 The draft Master Plan for Braddock Park is rapidly taking shape, thanks to the hard work of Fairfax County Park Authority staff, plus community input. A virtual public meeting about this Master Plan revision was held last fall, followed by another one on April 26.

“We got public comments and listened to you,” Supervisor Pat Herrity (R-Springfield) told the residents watching online. “Your input helps to make it a better park.”

The original 1981 Master Plan also contained a social plaza, tot lot, volleyball courts, an area for table games, plus trails for walking and running. But these elements were never built, and 5.32 acres of the park are still undeveloped.

So the Park Authority is working with residents to determine how Braddock Park should be updated to best serve the community’s needs, now and in the future. It aims to offer both passive and active recreation there, while preserving the site’s natural resources.

DURING THE APRIL MEETING, Park Authority Project Manager and senior landscape architect Doug Tipsword revealed the needs identified and presented the results of the latest citizen survey. “There are few opportunities for community gardens on the western side of the county, but many people want one,” he said. “The nearest dog park is 20 minutes away, and there’s a large number of dog owners living near Braddock Park. There’s also a desire for pickleball courts, but none are currently in our parks.”

He said 984 people participated in the survey; 40 percent were age 60 and older; 29 percent, ages 40-59; and 26 percent, ages 18-39. And 84 percent of them get to that park by driving. People said they mainly use it for softball, the running/walking trail, batting cages, dog walking and soccer.

What they want are improved ballfield conditions, fences or nets to stop the balls and a concession stand/dining area, as well as more parking, sidewalks and trails, plus better vehicle access and circulation within the park. Also on their wish list are more shade trees, natural-habitat areas, additional pavilions for gatherings, a walking/running-trail loop, an accessible playground and another softball field.

Tipsword then showed photos of the new park design incorporating these elements. They included dining pavilions, restrooms and concessions in the center; another pavilion with eight or more picnic tables; a new, 325-foot softball diamond; an accessible playground; four, dedicated pickleball courts in the southwest portion; a dog park or community gardens in the VEPCO easement area in the northwest; and a 1-mile, perimeter, trail loop with an ADA path to Centreville High, at the park’s western edge.

Also proposed are a possible stoplight at the park’s entrance, plus a possible second entrance from Braddock Road. More parking would be spread throughout the park. “We need 30 more parking spaces, plus even more parking to accommodate the added facilities,” said Tipsword.

“We could expand the north, central parking lot – where the former mini golf was located – for the dog park or community gardens,” he continued. “And a parking lot in the southwest corner would be for ballfield and pickleball users. There’d also be a drop-off area for ADA vehicles, buses and firetrucks.”

THE FINAL DRAFT Master Plan will be completed in June, with its presentation to the Park Authority Board slated for June-July. Another public meeting is earmarked for some time in August, with a comment period open until September. The Plan will be finalized in September-October and then, hopefully, approved by the Board in October.

However, advised Springfield District Park Authority Board member Mike Thompson, “This is a conceptual plan. It doesn’t mean everything will be built right away, and it doesn’t address funding.”

Meanwhile, pleased with what he heard during the meeting, Herrity said, “I like the direction the process is taking us.” For more information, go to https://www.fairfaxcounty.gov/parks/planning-development/braddock-park-master-plan-revision.