‘A Holiday Classic with a Heartwarming Message’ in Centreville
Votes

‘A Holiday Classic with a Heartwarming Message’ in Centreville 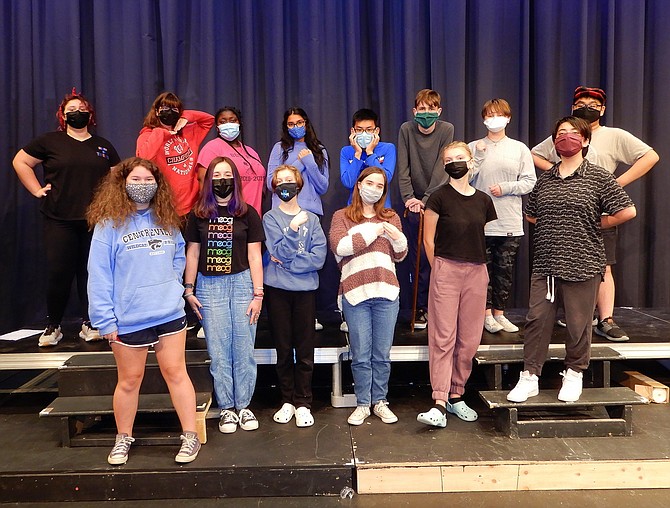 Believing it’s never too early to ring in the holiday season, Centreville High presents “A Christmas Carol” by Charles Dickens. The curtain rises Friday-Saturday, Nov. 19-20, at 7 p.m.; and Sunday, Nov. 21, at 2 p.m. All tickets are $10 at the door or via www.TheatreCentreville.com.

“Join us for the first CVHS musical in six years,” said Director Christie Blewett. “Our theater students have devised their own script to create a musical version of this classic holiday tale, incorporating Christmas carols into the show. The cast and crew are dedicated to making the start of the 2021 holiday season as bright and meaningful as can be.” 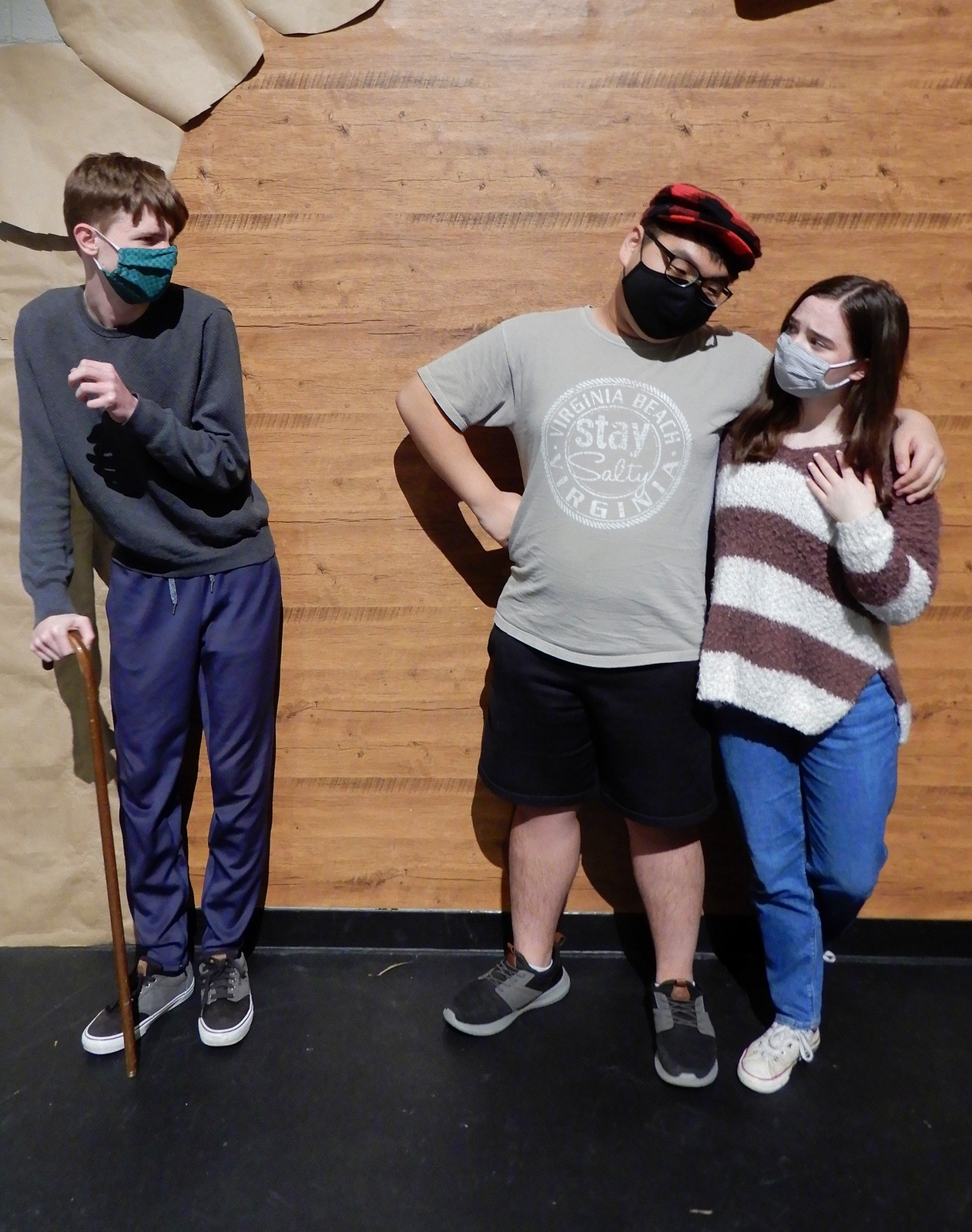 From left, Evan Williams (as Scrooge) rehearses a scene with Christian Chong and Katie Wood as Mr. and Mrs. Cratchit.

Besides the Centreville students comprising the cast and crew members, the show includes 19 elementary- and middle-school students from Liberty Middle and Union Mill and Bull Run elementary schools. “They play the roles of young Scrooge, Scrooge’s sister Fan, Scrooge’s friend Nick, Ignorance, Want and the lad who fetches the Christmas turkey,” said Blewett. “And all shows are masked, socially distanced and guaranteed to be family friendly.”

Portraying Ebenezer Scrooge is junior Evan Williams. “Scrooge is a grody, old man who’s had his heart turned sour by past Christmases that left a bad mark on him,” said Williams. “His fiancé, Belle, broke up with him then, and his business partner, Jacob Marley, died at Christmastime. He wants to change but doesn’t see any reason to. He’s pushed people away, so he doesn’t want to celebrate the holidays with them because they bring back bad memories.”

Williams enjoys his role because “I get to portray an old person and can act really grumpy and show some comedy in that, as well. I also like playing off the other characters – they contribute to my part.” And he especially likes the song, “It Feels Like Christmas,” because “it has a really Christmassy and jolly spirit and is cheerful and upbeat.”

As for this production, he said, “It’s a holiday classic. And the audience will appreciate the heartwarming message this show brings: Be kind to others and always help them.”

Junior Katie Wood plays Mrs. Cratchit, mother to 19 children, including the disabled and sickly Tiny Tim, and wife of Bob Cratchit, who works for Scrooge. “She’s incredibly outgoing and wants the best for her children,” said Wood. “She wants them to grow up with all the opportunities that, sadly, they don’t have because of the poor wages Scrooge gives her husband. She’s also loving, but when she needs to stand up for herself and her family, she will.”

“I adore playing her,” said Wood. “It’s a great opportunity for me to branch out and play someone mature. I really like working with the children and focusing on parts of the story that are less dark and deal with aspects of how a family grieves. And this show also celebrates the holidays.”

During the musical, she sings “It Feels Like Christmas” with her theater class, as well as a solo, “Bless Us All,” at the end. It’s her favorite song because “It’s a hopeful closing number and leaves you feeling full of the spirit of the holidays.”

Wood said the audience will like “the creative choices the actors have made to portray their characters in a more abstract way. They’ll also love the dance numbers’ energy, in contrast to the darker and more emotional parts of the story.”

This show has two narrators, Jaeden Kunkel and Will Jenkins. Kunkel, a junior, said they’re “almost puppeteers, narrating the action and telling what the actors are doing. We’ll also give extra context, such as explaining how they’re feeling or why Scrooge knows a certain place.”

He said it’s “fun narrating and allows me to push my boundaries as an actor and make the audience relate to me as much as they do to the actors. This is my first, big role, and I’m really excited to be in this show.” His favorite song is the opening one, “Scrooge,” taken from the Muppets’ version of “A Christmas Carol.” Said Kunkel: “I like its dark, frigid energy – which fits my character, who’s poised and proper.”

He said audiences will enjoy Centreville’s unique twist on this show. “The actors’ interpretations make the characters their own, and people will like seeing how everything comes together in one production,” said Kunkel. “The costumes give that Victorian vibe; many were handmade, and you can see the love and care that was put into each one. I wear a Victorian-style, ruffled shirt, long tailcoat and top hat, true to the Dickens time period, right before the Victorian era.”

Adama Sawi, a freshman, portrays the Ghost of Christmas Present. “He’s jovial and represents Santa Claus,” she said. “He also plays an important role in teaching Scrooge about how the Cratchits have been living – and how his awful treatment of them has caused them to be in absolute poverty. This ghost also shows him the happiness of the Christmas spirit and how to get into the holiday mood. Then the audience sees Scrooge change and soften.”

“I enjoy playing this part and showing my character’s fun, kind-spirited heart,” continued Sawi. “And I get to see the Cratchit kids and really put Scrooge in his place and help him become a better person.”

She especially likes singing, “It Feels Like Christmas,” because “It makes me feel like a star, and it’s something everyone can enjoy. I also like the chorus of ‘Scrooge’ and how the townspeople are united in disliking him.” She said attendees will enjoy the audience interaction, choreography and songs. And, added Sawi, “Our show’s based on the Muppets’ version, and people will like seeing it performed live.”

Sophomore Gabriel Amiryar is the stage manager. “We’re all working together as a team to build this show,” he said. “And after COVID, it’s great to come back together and create positive bonds and a great environment, and I think we’ve all done a really good job.”

Amiryar said the scenes take place in Scrooge’s house, the Cratchits’ home and Scrooge’s workplace. “Our sets are Victorian era – fancy, but rustic,” he said. “It’s a seasonal and happy show that everyone should come and see.”