‘Action-Packed, Funny and a Heartwarming Story’ 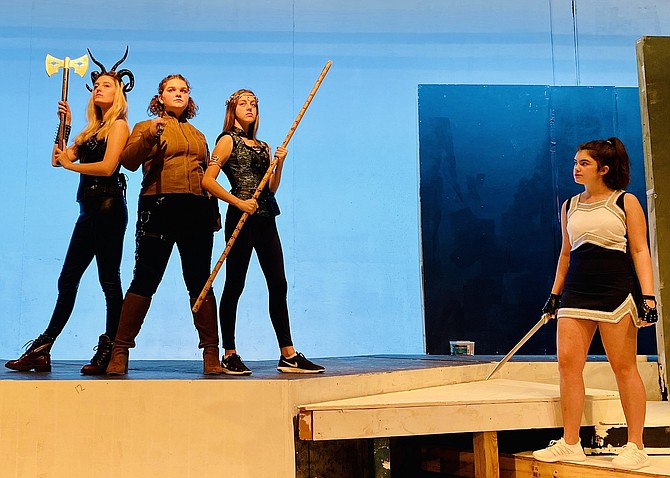 From left are Ella Ostlaund, Becca Marsh, Alyssa Dausch and Micaela O’Rourke in Chantilly High’s production of “She Kills Monsters: Young Adventurer’s Edition,” a dark comedy about the world of fantasy role-playing games.. 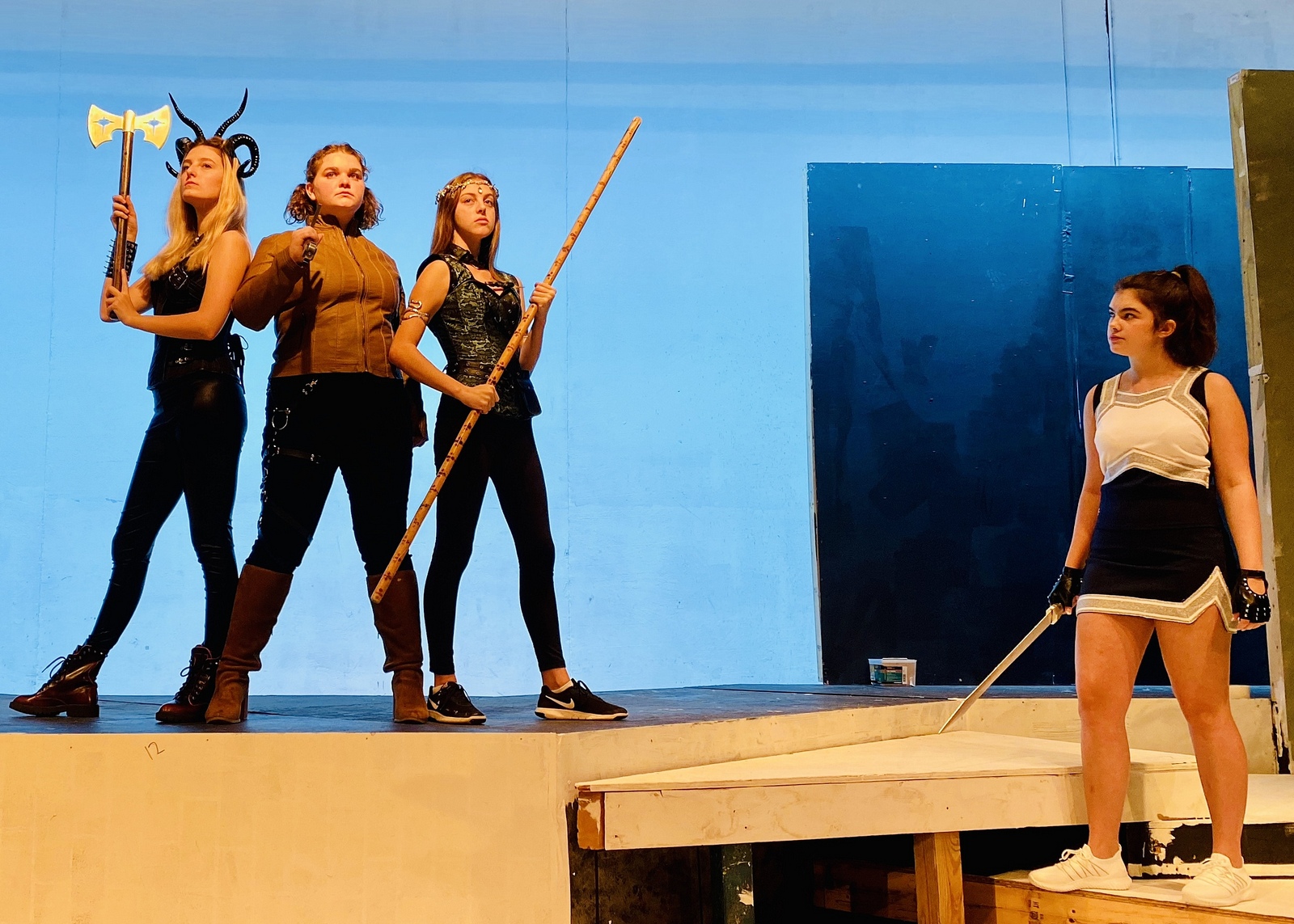 High-school senior Agnes Evans is coming to terms with her younger sister Tilly’s death in an accident. And when she finds Tilly’s Dungeons & Dragons notebook, she embarks on an adventure in the imaginary world that was Tilly’s refuge.

“The play contains mature themes, along with lighthearted and hilarious moments,” said Director Shannon Spicer. “As the D&D game comes to life, we have incredible fight scenes with swords, battle axes, demons, monsters and dragons. It’s a literal and figurative way to portray Agnes’s journey as she learns more and more about her sister.”

“It’s also perfect for high-school audiences and to open our show season, and we’re thrilled to bring live theater back to the Chantilly stage,” continued Spicer. “It explores the idea that each of us has a fantasy version of ourselves and mull that one thing we would change. These characters can do that by playing D&D.”

Senior Tyler Hicks portrays Chuck, the dungeon master, who tells the story to Agnes and rolls the dice. “The more Agnes plays, the more the real and the D&D worlds collide,” he said. “Chuck and Tilly have played together before, and Agnes learns how insanely popular her sister was in this world.”

Hicks said Chuck puts on a “bad-boy persona, when he’s actually geeky and nerdy. He acts with the confidence and charisma of a jock, but he’s not. I like playing this role because it has fun, comedic elements. The lines crack me up when I say them, so I try not to laugh on the outside. I get to do big movements, as well as more subtle acting choices, that ground my character.”

“The audience will enjoy learning about the relationship between Tilly and Agnes,” he said. “They’ll also like the show’s technical side and the effort the techs have put into the costumes. And seeing the monsters come to life will blow people away, as will a character named Steve.”

Suggested for ages 13 and older, this show takes place in 1995 and has tough moments where transgender and gay youth are bullied and harassed. “The actors had a hard time digesting those lines, but they knew they had an important story to tell,” said Spicer. “I’m so grateful for such a dedicated group of actors and technicians bringing it to the stage.”

“It’s also important to ensure that we’re all understanding of the paths that individuals walk,” she added. “This play provides a voice to all our students, and I really appreciate that.”

Playing Tilly, 15, is senior Becca Marsh. “In life, she was reserved, nerdy and uncertain of herself,” said Marsh. “But in the game, she’s confident and comfortable. She loves playing it with her D&D friends, so she puts her whole effort into it and shines. Agnes sees Tilly in ghost form as she goes through the game blueprint Tilly left behind.”

Calling Tilly a colorful, out-of-the-ordinary character, Marsh said, “She’s pretty different from me, so it’s fun to explore her story. In the game, she gets to be her truest self and not worry about what others think – and that’s part of why she’s so cool.”

“This play is exciting and action-heavy,” continued Marsh. “We’ve been doing a lot of stage combat, learning to use maces, swords and daggers. And that, in combination with everybody in the cast – including our strong ensemble who are the monsters we fight in the D&D adventure – make for a really entertaining show. There’s always something to look at.”

Junior Micaela O’Rourke portrays Agnes, 17. “On the surface, she’s the basic girl next door – a popular cheerleader with lots of friends,” said O’Rourke. “But deep down, she’s grieving the loss of her sister and has come to the realization that she never really knew her – and now, never will. So she finds Tilly’s D&D adventure module and eventually learns it was Tilly’s actual diary, written in D&D terms. And while going on her sister’s adventure, Agnes learns about her sister and herself.”

O’Rourke likes her role because “I do lots of stage combat, fighting with the D&D monsters Agnes encounters. Emotionally, she’s also cool to play because she has so many layers, including the sadness and emptiness hidden under her layers of makeup and popularity. And seeing Agnes’s journey, once she finds herself, is beautiful.”

She said the audience will love how this play differs from traditional tragedy. “It also brings wonderful comedy to the table,” said O’Rourke. “It’s a great show, and the family we’ve all become is incredible.”

The two stage managers are Molly Shear and Stephanie Shraga, and both are excited about the production’s technical aspects. “Some of the highlights are projections of the scene locations and the gigantic, 10-foot poles for our five-headed dragon,” said Shear. “The abstract set has lots of levels, and we created a 5-foot, papier-mâché eyeball as our D&D Eye of the Beholder. We also have a 6-foot, gelatinous cube that morphs into a human being.”

“Another huge thing is the incredible amount and variety of weapons we use in the D&D fight scenes,” she continued. “Our set even shows the contrast between the D&D world and the real world by their different locations onstage. The show is action-packed and really funny; and ultimately, it’s a heartwarming story.”