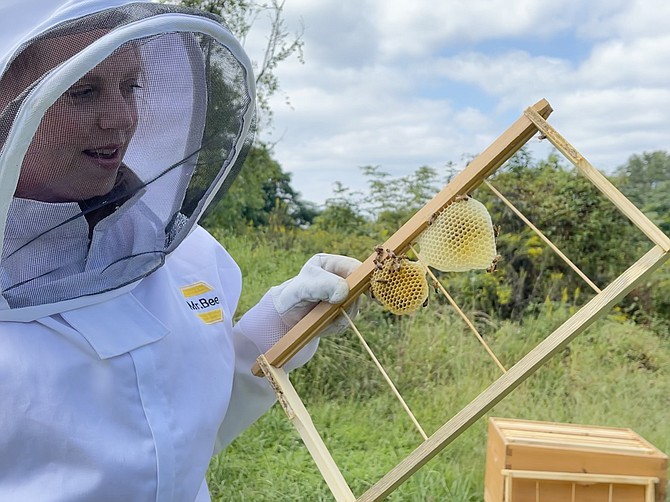 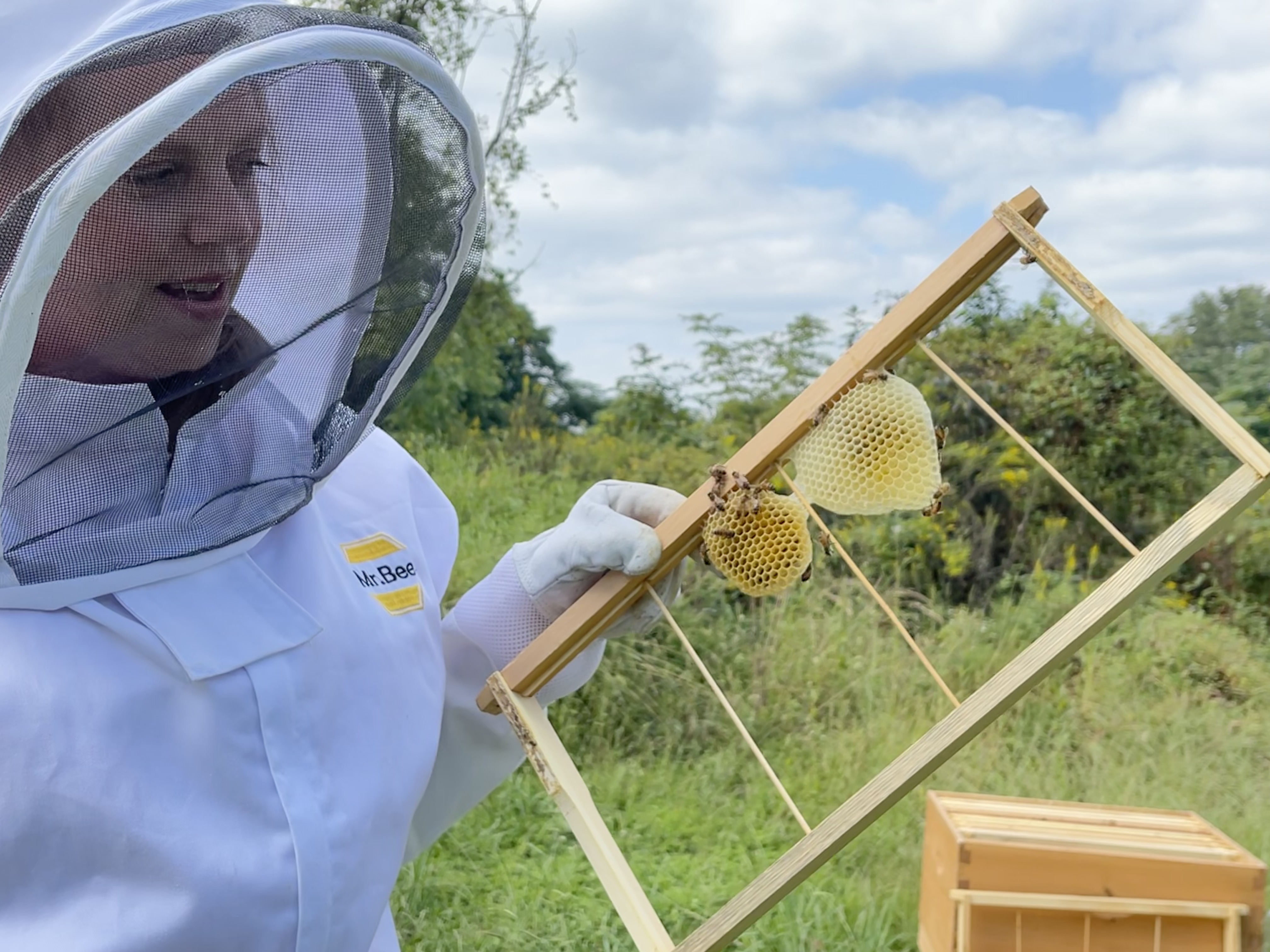 Beekeeper Michelle Gill, Lorton, checks a frame from her hive where bees have produced wax; the darker honey (left) is made with pollen from local plants, the lighter honey on the right was produced from sugar water supplementing their diet.
With scientists decrying the decline of bee species worldwide, Lorton resident, Michelle Gill, is doing her part to provide a safe haven for colonies of honey bees. Gill’s apiary, tucked into a fold of green space near Laurel Hill Park, provides a perfect spot near many native wildflowers and fruit trees for her bees to call home.

After noticing how much nearby farming had given way to development since her move to this area in 2005, she became interested in beekeeping out of increasing concern for the welfare of pollinators. After making a trail friend who had meadow space, their bee partnership soon was underway.  Starting small with three hives, her goal is “to learn as much as possible about the nature of bees, without a focus on honey production.” Leaving the honey in the hive assures her bees will have sufficient resources to survive through the winter.

Across the U.S., honey bee products and services are worth approximately $700 million annually, however, their value as pollinators far exceeds the value of honey production.

There are about 20,000 species of bees; only eight are honey bee species.  The majority of bees, 70 percent, are ground bees living solitary lives in underground tunnels, rather than social bees in communal hives. Bees of both types, solitary and social, have a vital role in our food production system as pollinators. With about half of North America’s bee species in decline, even small aviaries, like Gill’s, are important. In 2018, Virginia’s General Assembly updated its program and created the Beehive Grant Fund “to promote the establishment of new beehives in the Commonwealth.” The program, currently closed to applications, provides beehive equipment; beekeepers must acquire their own bees. 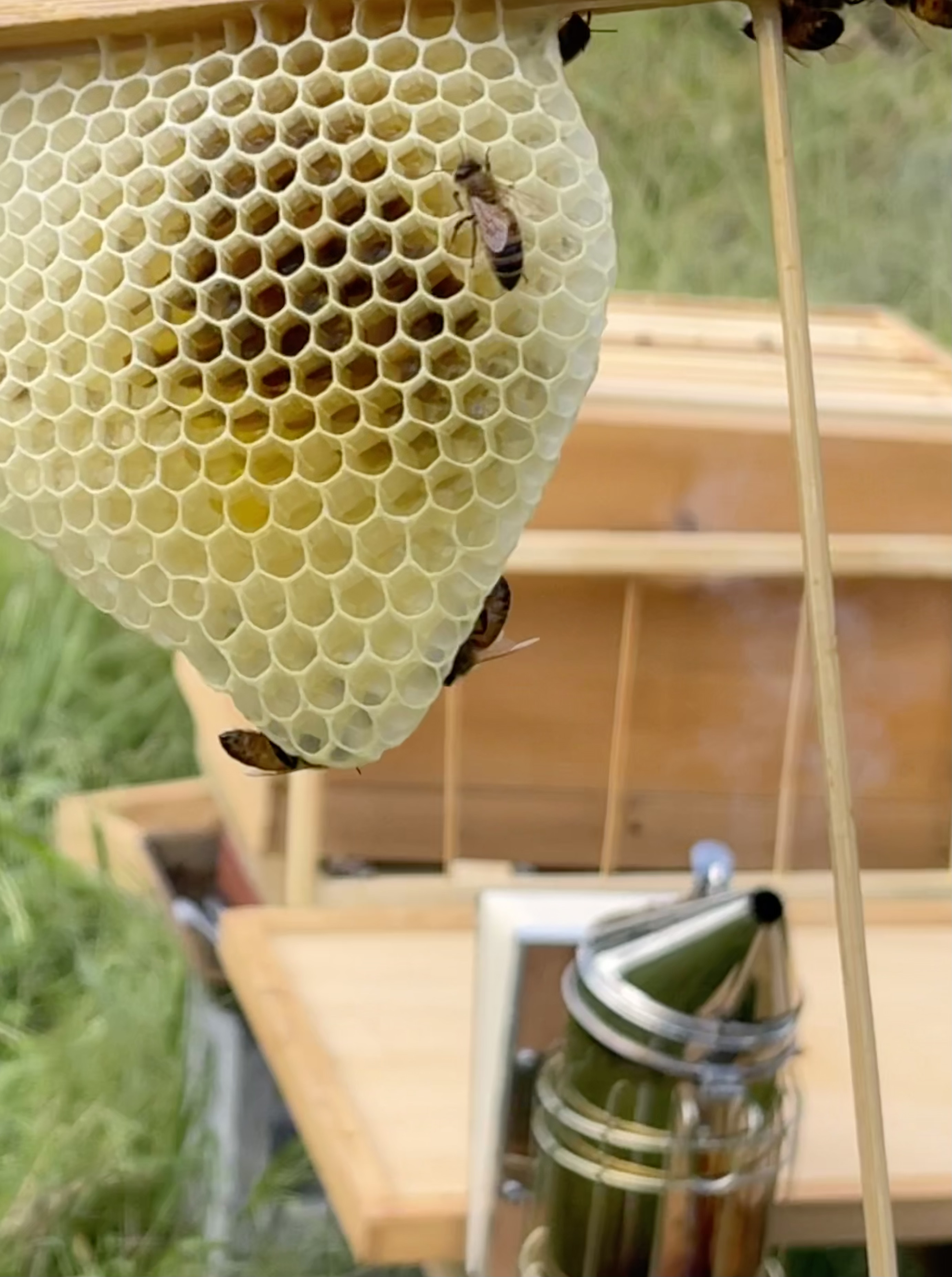 A smoke pot (below right) is used to keep worker, nurse bees, calm while the hive frames are checked.

The apiary, from the Latin ”apis” meaning bee, houses a queen bee in each hive box. Worker and drone bees within a hive are the offspring of the hive’s queen. The queen, the only female to lay eggs to reproduce, is tended in the hive by female worker bees. Worker bees also perform the task of foraging; leaving the nest to collect nectar, pollen and water. Drones, male bees, without stingers, mate limited times to assure new generations, and then die. A queen lays an average of 1,500 eggs per day. Bee species are found throughout the world, except in Antarctica.