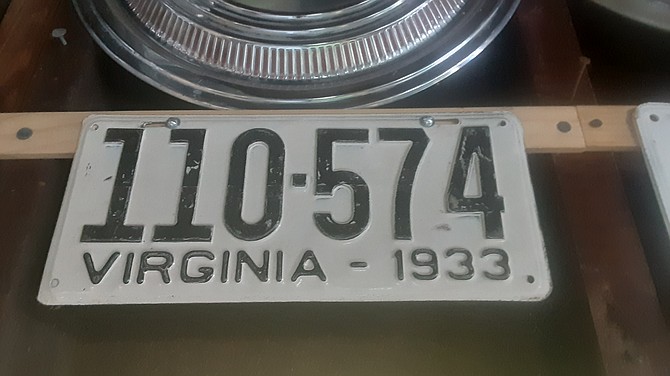 Hubcaps and collectibles adorn the walls in Lorton.

If your hubcap has ever flown off the wheel of your car while cruising down the road, chances are it’s in one of Ed Beahm’s sheds off Lorton Road

in southern Fairfax County. He’s got over 10,000 hubcaps, amongst other road oddities, stored in a few sheds around his property just waiting for a new home.

It started when he was a child scavenging the roadside, and once he started displaying his collection, passersby showed interest, and it’s grown from there. “My mother suggested I sell them, and it turned into a little business,” Beahm said.

He’s got every type of hubcap one can imagine, plus a large assortment of license plates, and a few demolition derby cars that ran in the Prince William County Fair recently. It resembles the Thieves’ Market that once stood in Alexandria, and seems like Frank and Mike from the American Pickers reality show will be stopping by any minute. It's’ that kind of place.

“Everybody says that,” Beahm said.

Hubcaps started showing up on cars in the 1940s and became full-wheel cover caps in the 1960s. They were first called dust or grease caps, and then the “dog dish,” hubcap became popular. Hubcaps were steel then, and the Chevrolet Monza was the first car with an all-plastic hubcap.

Beahm knows all about the plastic hubcap. “Everything’s plastic these days,” he said.

One of his sheds has all Ford and Chrysler caps, while another has VW and Toyota, and a third has General Motors.

In recent times, all the cars moved away from hubcaps to a smaller, center cap that rarely falls off. He does get business though. In early August, a guy was cleaning out his shed and found three hubcaps from a former car he had. It’s not a booming business, but it does have its place on Lorton Road.

“Yesterday I had two people come by,” he said.

In his garage are his 1959 Edsel and his brother’s 1960 Edsel, both in such good condition that he has driven it in the Lorton Parade a few times.

At one time, there was another home-based hubcap salesman on Hooes Road and another on Lee Chapel Road in Springfield but they’re gone now. Then there’s Hubcap Heaven, which now goes by “HH Auto Wheel & Trim.”

“Hubcap Heaven tried to come down here and buy me out,” Beahm remembers.

Beahm’s heart may be in the hubcaps and demolition cars out back, but he worked 28 years for Fairfax County at the Noman M. Cole wastewater treatment plant that is near his house.