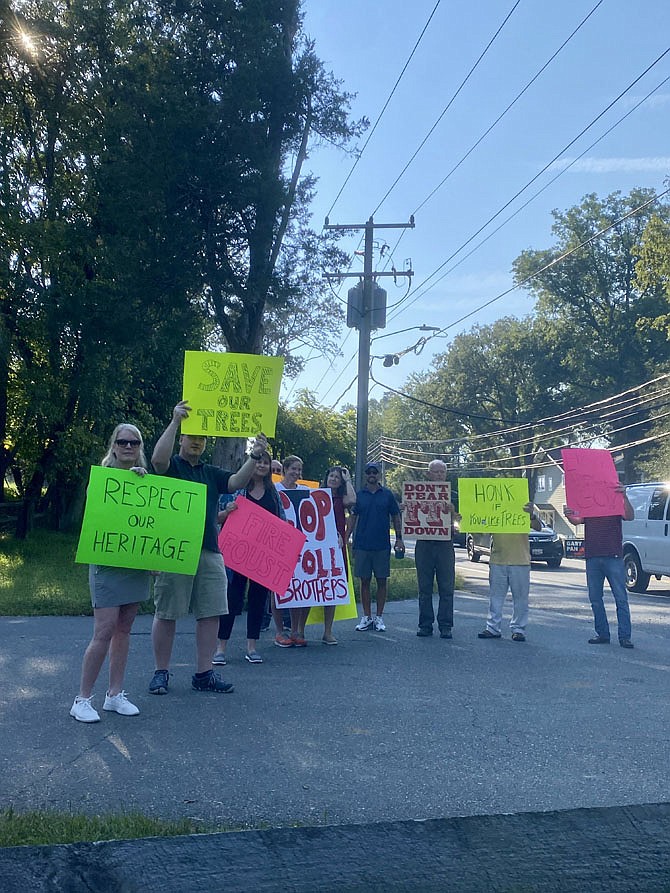 Great Falls — Concerned residents and Great Falls Citizens Association members protested Wednesday morning, Sept. 15, at the corner of Innsbruck Road and Georgetown Pike. Standing a short distance west of what will be the entrance to Marmota Farm, a 22.78-acre development for 11 homes under construction by Toll Brothers, protesters held up signs voicing concerns, words visibly lettered on their signs.

The first was "Respect our Heritage." The area of concern is part of the Georgetown Pike property, running 15 feet in width from the pavement’s edge. To the untrained eye, it appears a natural grassy swale, deep in sections, overgrown with underbrush and treed. Some specimens appear very old; some look scraggly, their pike-facing branches previously pruned to protect overhead power lines.

The United States Department of the Interior National Park Service lists Georgetown Pike as a registered property in the National Register of Historic Places. One of the contributing structures on the historic state-owned property is "the entire original roadbed, including grading, elevation, and direction with adjacent drainage ditches and unpaved right-of-way used for foot and horseback traffic and known as 'summer roads.'”

This is the grassy, treed area 15-feet from the edge of the pike's paved area and listed as one of its six "contributing structures," the same value designation as the original stone retaining wall at Pimmit Run on Georgetown Pike also listed as a contributing structure on the National Register of Historic Places. Unfortunately, those designations do not prevent development.

The second concern and the one most visible to those driving by that morning was to "Save Our Trees," those within the protected easement of the historic summer road and, most specifically, an old Red Oak tree. Bill Canis, president of the Great Falls Citizens Association, said one of the protesters held a sign for people passing by east and west on the pike that said, “Honk if You Like Trees.”

"In a half-hour, hundreds of people have been honking their horns because they agree that this is the right step to save those trees," Canis said.

The protestors' third key concern was to stop the ongoing clearing. Protestors could see several trees recently cut to the ground outside the marked limit of disturbance line east of the construction entrance, according to Jennifer Falcone, chair of the Land Use and Zoning Committee of Great Falls Citizens Association; new grading also occurred between the pavement edge and the limit of disturbance line, she said. In addition, the actual construction entrance was larger than the finished roadbed width.

The next day, Thursday, Sept. 16, email between Falcone and Supervisor John Foust and his staff indicated an attempt to redesign the entry and protect the trees. "The latest revised plan for the entry road was received by the county on 8.11.21, per Quy Nguyen. This road entry…removes the tapers as everyone agreed and is significantly reduced in width from the original," said Falcone in the email.

However, by late afternoon, Falcone received notice from the staff at Supervisor Foust's office, the plan was not approved, and they expected a resubmission "within the next week."

Foust (Dranesville) responded to the week's unfolding events. In an email dated Thursday, Sept. 16, Foust said that he was "disappointed that the development at Marmota Farm is not consistent with the important goal of preserving the historic integrity of Georgetown Pike."

Foust said that while the events were unfortunate, "the project is consistent with long-established zoning for the site and is being developed ‘by-right,’ without the need for any rezoning approvals from the county. In fact, the site plan for the development was approved fifteen years ago."

Foust added he and his staff are working with the Great Falls Citizens Association and the developer to reduce some of the project's adverse impacts.

On Friday, Sept. 17, Michael Clagett, an ISA arborist and lead arborist at the U.S. Naval Academy submited a tree assessment for the Southern Red Oak (Quercus falcata), the "old tree" growing within the easement of the historic summer road along Georgetown Pike in Great Falls.

Clagett estimates the tree to be over 200-years-old. The oak tree's diameter is greater than 50-inches and height between 55 to 65 feet. His inspection of the base indicates no presence of rot, insect damage, or defects in root flair visible. The tree appears well-anchored, and "failure due to lean is considered unlikely."

“The tree in question is considered a significant asset within the Great Falls area and is a source of historical connection for many residents and people that appreciate the history of the Georgetown Pike and the region more generally,” Clagett said. “It is proper and important to consider the connection to history that these large trees provide.”

Oone of the concerns to the tree involves a bike path that is to be constructed and a 12-inch drainage pipe installed underground within the zone of the Red Oak's major structural roots. "The pipe installation should avoid severing major roots, and the bike path should be rerouted to avoid damaging roots," he said.

On Saturday, Sept. 17, Toll Brothers responded. In an email, Heather Reeves, vice president of public relations and social media at Toll Brothers, said they had been working closely with several Fairfax County officials and community organizations to refine the community's design. "We have also been responsive in addressing concerns related to the community, including continuing to work cooperatively with the county to save trees throughout the site, as well as preserve the historic nature of the Georgetown Pike roadway.”