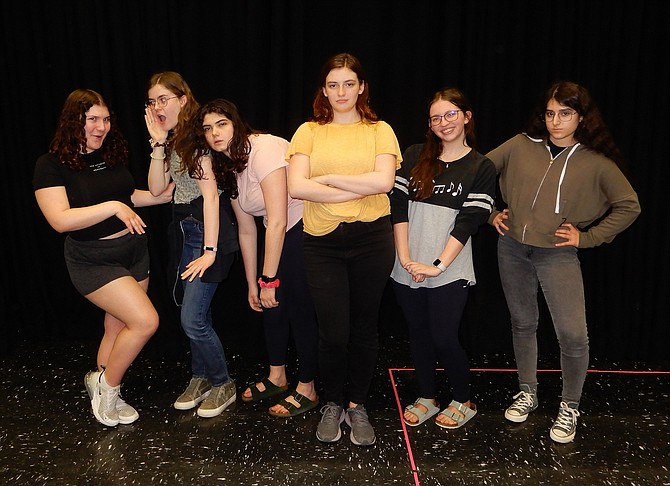 Full of laughter and heart, “9 to 5” is Westfield High’s upcoming Cappies show. And as it did with audiences who saw the movie, this story struck a chord with Westfield High’s theater director, Enza Giannone-Hosig.

“I’m a working mother, working more than 9 a.m.-5 p.m., and I related to it – and especially to Violet’s character,” she said. “Especially after the last year-and-a-half, we’re right back to that grind. I remember how funny this movie was, and I wanted us to perform something that would make us laugh and raise our spirits. I wanted something for the little guy who wins at the end.”

“It’s interesting how this story was based on a real, 9-5 movement, organized by women being mistreated in the workplace,” said Giannone-Hosig. “Jane Fonda found out about it and produced this movie, and Dolly Parton wrote the songs. And even though it takes place in 1979, it’s still relevant today. We’re still hearing about women being mistreated at work and making less money than men. So we’ve come far, but not far enough.

“Audiences will laugh at the slapstick humor and enjoy the over-the-top choreography. But ultimately, it’s a heartwarming story with relevance to what women are still experiencing. People will also enjoy being back in the theater with a live orchestra and seeing actors onstage with full costumes and sets. The actors wear 1979 business casual, with a little pop of color every time one of the secretaries fantasizes about killing her boss.”

Junior Elias Collier plays Franklin Hart, boss of Consolidated – the company where almost all the story takes place. “He’s misogynistic and is all about the women,” said Collier. “He’s one-dimensional and immature; he never learns anything and is more like a man-child.”

Collier likes his role because “He’s very eccentric and completely opposite of me. It’s really fun to explore his bad side because, as an actor, that’s how you grow. My favorite song is ‘Here for You,’ which he sings in his head to Doralee. He wants to get with her, and it’s such a funny song.”

Audiences will love the show, he said, because of its terrific choreography, dancing, singing and acting. “The singers and the three main actresses [playing employees Doralee, Judy and Violet] are amazing,” said Collier. “And when you put it all together, it makes for an incredible experience. Also, the set design is really immersive; it’s two stories, and we can actually walk up the stairs. My character is either at the top level, watching everyone and seeing himself as better than them, or at the bottom, yelling at them.”

Portraying Doralee is senior Kaitlyn Long. “She’s flirty without trying, full of energy, colorful and a fun person to be around,” said Long. “She’s also very strong and doesn’t take any nonsense from anyone.”

“It’s fun playing her because she gets me out of my comfort zone,” she continued. “It’s my first lead, and she’s openly sexual, so it’s harder for me. The music I get to sing is amazing, and I have entertaining scenes with a lot of unique characters.”

Long especially likes the “Cowgirl’s Revenge” number that she sings. “It’s fast-paced, and the message behind it is that Doralee is taking back her life,” she said. “She’s also getting back at Mr. Hart for all the times he’s put her down.” As for the show, she said what will resonate with the audience is its amount of humor, the girl power and the camaraderie among the three women and the cast as a whole.

Senior Elli Vlattas plays Judy. “She’s an innocent, new girl with no office experience,” said Vlattas. “Then she meets Violet and Doralee and finds her tribe and where she needs to be in life. She’s recently divorced but, by the end of the show, she realizes she doesn’t need a man to be happy.”

“I love this role because Judy’s similar to me and it’s fun to put myself into her shoes, thinking how I’ll be the new girl, next year, at college,” explained Vlattas. “And she has the biggest progression on the show – she learns to stand up for herself.”

Her favorite song is her solo, “Get Out and Stay Out,” which she sings to her ex-husband who wants to return to her. “But she sends him away,” said Vlattas. “It’s very empowering, and others in tough situations can relate to it.”

The show will appeal to audiences, she said, because “It’s a really funny comedy with an important message – that everyone should be equal everywhere, whether in the workplace or at home. I think everyone will love it. So many people have seen the movie; and now, high-schoolers will see the play – and they can all come together and enjoy it.”

Portraying Violet is senior Julia Manser. “She’s been working at the company the longest and aspires to be the female CEO,” said Manser. “She’s a strong, hardworking, single mother and a widow. She’s a no-nonsense person, but also has a kind side.”

“I’m really enjoying playing her because I’m a bossy person, so I like getting to act that out,” she continued. “And it’s been fun working with the other two girls to play up the comedy. Unlike some of the other characters, Violet is three-dimensional, so I appreciate her nuances.”

Manser especially likes the song, “I Just Might,” which the three women sing individually and then together. “They’re each talking about their own dreams,” she said. “Violet’s wishing to be treated equally at work and thinking, ‘I just might get to a higher position and be treated fairly.’”

She said audiences will enjoy “the comedy and the friendship between the main characters and the ensemble members, as well. They’ll also love getting to see Dolly Parton’s music performed onstage and the high-energy choreography.” Regarding the show’s message, said Manser, it’s that “Women throughout history have worked hard and wished for things they deserve, and their stories need to be highlighted more.”