‘How We React in the Moment Is Often Flawed’ in Fairfax 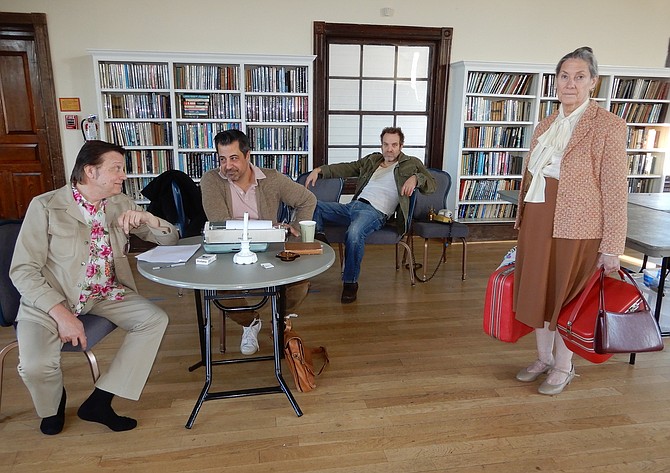 The City of Fairfax Theatre Co. (CFTC) started rehearsing “True West” in February 2020 – but then came the pandemic. Now, though, this modern-day western without horses is ready to take the stage.

The show runs April 29 through May 8, upstairs, in Fairfax City’s Old Town Hall, 3999 University Drive. Go to https://fairfaxcitytheatre.ticketleap.com/ for the specific dates, times and ticket prices. Due to mature themes, it’s for ages 13 and up. It stars Mikael Johnson, Chris Andersen, Jessie Roberts and D. Scott Graham.

“This is a talented group of actors, and we were really fortunate to retain all four of them from two years ago,” said Director Matt Chapman. “ 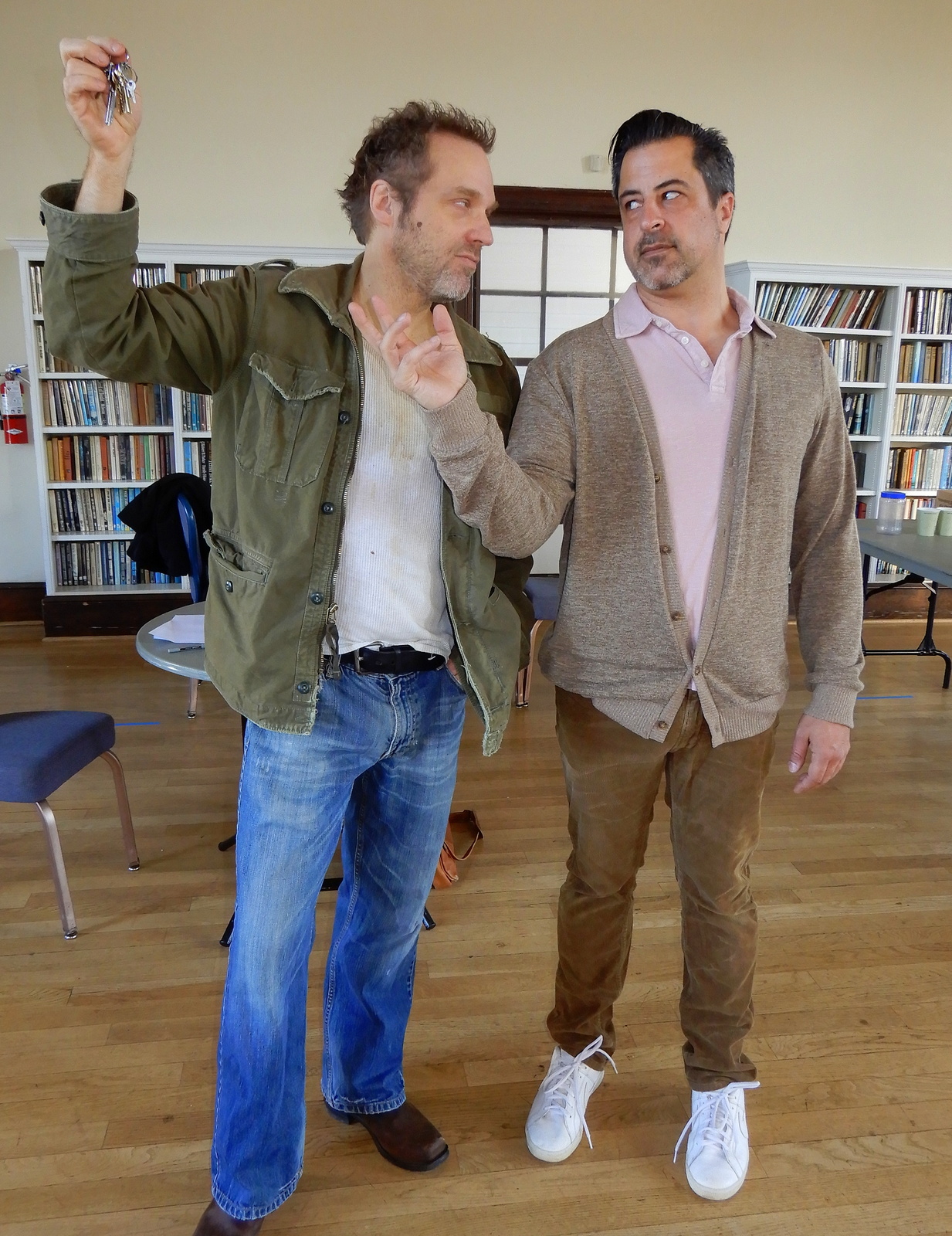 From left, Chris Andersen (Lee) taunts younger brother, Mikael Johnson (Austin).
Both Chris and Michael have strong backgrounds in improvisation, and that informed their portrayals of their characters’ back stories that they bring to light. And our producer, Michael O’Dell, has been our champion in moving this play forward, through the pandemic and afterward.”

Actor Sam Shepard wrote the stage play. Set in the early 1980s, it tells the story of two brothers estranged for five years and accidentally reconnecting at their mother’s home in Southern California, while she’s away.

“It doesn’t go particularly easily, although each brother has something to offer the other,” said Chapman. “How they eventually negotiate the distance between them is the lifeblood of this story. It’s a drama with some humor, and there’ll be times the audience will be laughing and other times when they’ll be holding their breath. The play also includes a fire and a fight – for which we enlisted the help of fight choreographer Casey Kaleba.

“Our set designer, Tina Dempsey, designed a beautiful interior of a house with functional features. And we worked with a young, local musician and composer, Ellis Hamilton, to create some original, percussion soundscapes to accompany the show from start to finish. This adds a layer to the play’s emotions, and it was fun to see how Ellis interpreted the story through percussion.”

Chapman said the show has a great balance of humor and intensity. “I think different people will laugh at different places,” he said. “But ultimately, it has an undercurrent of tension, the whole time. The older brother, Lee, is kind of a bully, but we get to see the chinks in his armor and where he cares about his younger brother. But both men are at breaking points in their own lives, and that leads to the continued friction between them.”

He said the storyline isn’t predictable, so the audience will be surprised by its twists and turns. “People think they’d always be able to make the right choice in difficult situations,” explained Chapman. “But the reality is more complicated, and how we react in the moment is often flawed. The play explores that theme in original ways, so I think audiences will enjoy it.”

“It’s an exciting production and a nice opportunity for people to see something different,” he added. “And it’ll create great questions for them to ponder and discuss with others after they leave.”

Mikael Johnson plays the younger brother, Austin. “He’s the hero child of a broken, dysfunctional family,” said Johnson. “But he’s decided to make a name for himself by attending an Ivy League school and going into screenwriting and show business, which offers the potential of fortune and fame.

“He’s buttoned-up, intellectual, studious and introspective. But underneath it all, he’s also partly like his father and brother in their tempers and fondness for drinking to escape their problems. They all want to live in the barest way possible, free of responsibility and accountability.”

Johnson loves his role because he identifies with Austin. “I relate to his escapism,” he said. “It’s also challenging interpreting his feelings toward himself, his brother and the world. And I like my character’s life arc and how layered he is.”

Describing this play as darker and more offbeat than others, Johnson said audiences will enjoy it. “We’ve got a great cast and – with Matt’s direction, the set design, fight choreography, talent and preparation – a lot of hard work has gone into its production,” he said. “And I think it’ll pay off in a quality show.”

Portraying the older brother, Lee, is Chris Andersen. “He didn’t go to college and has spent most of his life drifting, burgling houses and living in the Mojave Desert,” said Andersen. “He’s antisocial, has trouble dealing with people in civilization and doesn’t fit well in society. He’s deeply jealous of his college-educated brother who’s selling screenplays in L.A. Lee’s the kind of guy who sets fire to things to see them burn. He’s also a hustler, convincing people to give him money – and he has a raging temper.”

Andersen’s enjoying his role, too, because Lee is “alternately funny and violent. And I like his aggressive games with Austin, always trying to keep a step ahead of him. He’s also very physical – a real man of the western desert – and he has no impulse control, so I get to let it all hang out.”

He said the audience will like how funny and aggressive the brothers are. “They’ll also like watching them spiral down together and implode and explode,” said Andersen. “And they’ll see them struggle to keep their brotherly bond in the face of their own, internal conflicts.”

Jessie Roberts portrays their mom (who is unnamed). “She’s disconnected from her sons and just returned from Alaska,” said Roberts. “She left a bad marriage, hoping to change her situation and find a new life there, but it didn’t happen. She hasn’t been close to Lee in a while, but hasn’t had the best relationship with Austin, either. The fault is partly hers and partly their father’s and the environment they were raised in.”

Although the mom gets excited about art, Roberts described her as reserved, detached and dispassionate. “She has to struggle to find moments of joy,” said Roberts. “I want to give her as much life as possible, but there’s not much life in her. So I like playing her because it’s challenging to keep her low-key and disconnected.”

Saying there’s “a rawness to the story,” Roberts said, “It’ll make the audience think about family relationships. And it’ll leave them wondering what’ll happen next. And hopefully, people will talk about it and about how they relate to their own families.”

D. Scott Graham plays Saul Kimmer, a movie producer and colleague of Austin’s, working on a script with him. “He’s a wheeler and a dealer and a Hollywood schemer, and his dream is to make the next, big blockbuster,” said Graham. “He has a big personality, is headstrong and has a clear vision of how things should be.”

Graham said it’s fun portraying Kimmer because “He’s very different than me. He’s also the fly in the ointment between the two brothers and, inadvertently, has stepped into the middle of their family dynamic.”

“This show is about interpersonal relationships, family, brothers, friends, business associates and how that interaction plays out – especially when not all the characters are truthful,” said Graham. “Everybody has their own agenda. It’s funny, touching and inspirational and hits on a lot of dynamics that we all experience. And it really is a thought-provoking play that makes you think about the human condition.”