‘This project is on the county’s priority plan.’ 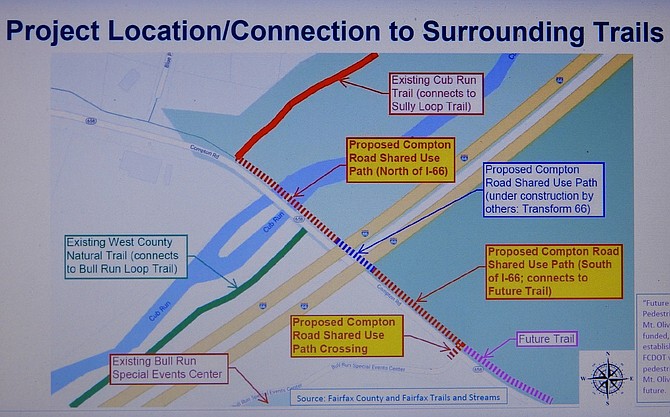 This map shows how the Compton Road Path would connect to other trails.

Working together, Fairfax County and VDOT plan to construct the Compton Road Shared-Use Path in Centreville. But it’s not just any path – this 10-foot-wide trail will become part of the I-66 Trail Network, while also benefiting local residents.

VDOT presented details during its recent, virtual, design public hearing. “This path will provide connectivity between the Bull Run Special Events Center and the Cub Run Trail System, as well as other trails in the area,” said VDOT Consultant Project Manager Kevin Hurt.

“The intent of this project is to improve mobility and travel choices for pedestrians and bicyclists in the area,” he continued. “It will include a bridge over Cub Run to safely facilitate the shared-use path over the stream and will also provide connection to future trails.”

Noting how extensive the I-66 Trail Network is, Hurt said the new path will also yield a connection to it. And he stressed that it’ll connect, as well, to the existing Bull Run Loop Trail, Sully Loop Trail and West County Trail. (See photo with yellow boxes). It’ll cross Compton Road itself at Bull Run Special Events Center Drive. Hurt then explained the three sections the Compton Road path will have.

* South of the I-66 bridges, it’ll have a minimum 2-foot, graded shoulder with ditches on each side to prevent stormwater runoff from crossing the path. Compton Road’s shoulders will also be improved in this area.

* Already under construction under the I-66 bridges, this part of the path has a 3-foot buffer between the required handrail and retaining wall. It’s a constrained area where the path must fit between the newly built retaining walls and bridge piers. This section is planned for completion, either sometime this year or in early 2023.

* North of the I-66 bridges, the path will be about 380-feet long. This portion includes items that will add to the construction time – Compton Road bridge widening, plus relocation of a waterline for the project fill slopes. This section is also the transition between the part already being built and the bridge required to cross Cub Run.

“This area has steep terrain and a large fill section that’ll be required for the path leading up to the bridge,” said Hurt. “A handrail on the right will be provided for safety, due to the elevation difference between the proposed path and the existing ground. There’ll also be a guardrail on the left to protect pedestrians and bicyclists from vehicles on Compton Road.”

Planned, as well, is a guardrail opening for access to the existing West County Trail. And there’ll be a 3-foot buffer between the path and handrail.

* The final section involves the part of the path that goes over the Cub Run Bridge. For safety, a barrier on the bridge will separate the path from vehicles traveling on Compton Road. And there’ll be a 2-foot buffer between the edge of the path and the bridge barrier.

“To build this section, it’s likely that traffic will be reduced to one lane during portions of the construction, with a temporary signal,” said Hurt. “To improve constructability and reduce impacts to traffic, the VDOT design team is evaluating a separate bridge structure for the path that’ll be constructed adjacent to the existing bridge, with a planned, 5-foot separation.

“New abutments will be added to support the bridge carrying the path and will be designed to accommodate Cub Run flooding. The path in this area will connect to the existing Cub Run Trail. Due to elevation differences between the proposed and existing path, reconstruction work along the Cub Run Trail will be required for their connection.”

For the same reason, said Hurt, handrails will probably be needed on that trail, as they will be along the new Compton Road path north of the Cub Run Bridge.

As for the schedule, design approval is expected this fall, with right-of-way acquisition and utility relocation anticipated to begin in spring 2023. Start of construction is currently planned for summer 2024 and expected to take approximately 20 months.

Total project cost is estimated at $7.9 million. Of that amount, preliminary engineering is earmarked at $1.5 million; right-of-way acquisition and utility relocation, $1.1 million; and construction, $5.3 million. Some $4.5 million has already been allocated, with another $3.4 million pending.

Paul also wondered if there was a possibility this project might not be funded. But Biesiadny was adamant that the county would keep searching for money until it’s found. “This project is on the county’s priority plan,” he said. “So, no, there’s not a chance it won’t be funded.”

Bill asked, “For the West County Trail crossing of Compton Road, north of I-66, will there be signage alerting motorists of the trail crossing?” Hurt replied that there’ll be an opening for the guardrail on each side and the project team is evaluating any additional measures needed there.

Thomas asked if additional bridge supports would be required, regardless of whether the Compton Road path across the bridge is connected or separate. And Hurt said additional, bridge abutments would be needed in either case.

Thomas also asked, “At the Bull Run Regional Park access-road crossing, has a traffic study been done on the visibility of northbound traffic for those crossing Compton Road? It’s a fairly blind curve.”

“We looked at several different options for the crossing there – and I agree, it’s definitely a constrained area,” replied Hurt. “A sight-distance analysis was done at the current crossing, and we feel that location is the best.” He also said VDOT didn’t want to have that crossing too far away from the Bull Run Special Events Center.

Lastly, Mary said she was eagerly anticipating completion of construction and a safe, walking path for her family. Then VDOT Preliminary Engineering Manager Andy Beacher thanked everyone for their participation and feedback, adding, “We look forward to continuing to work with the community as this project moves toward implementation.”