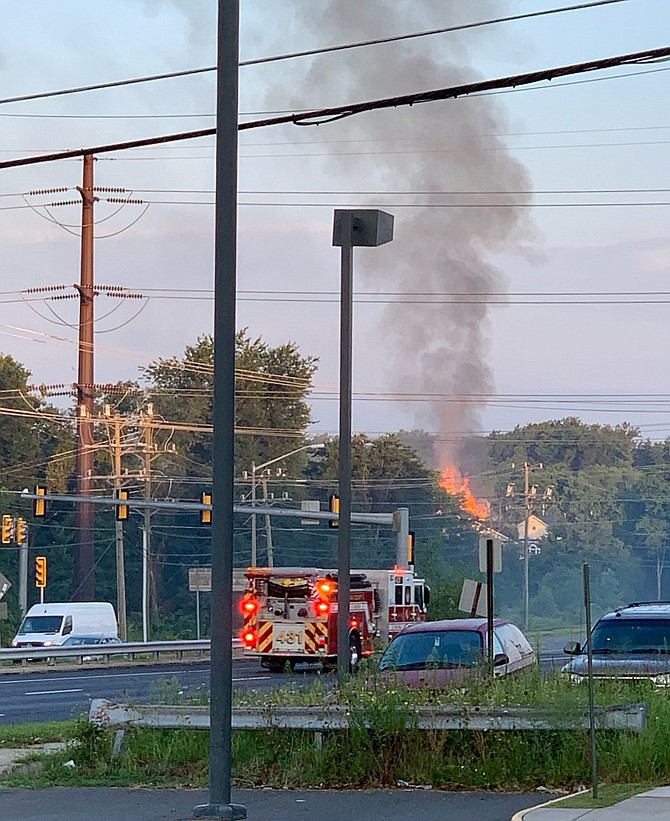 This fire engine is on the way to the scene of the fire.

An early morning fire last week displaced two residents and did an estimated $175,000 damage to their Fair Oaks townhouse. According to fire investigators, the blaze was caused by improperly discarded smoking materials.

The incident occurred last Wednesday, Aug. 10, at 6:37 a.m. Units from both the Fairfax County Fire and Rescue Department (FCFRD) and the City of Fairfax Fire Department were dispatched to the 12000 block of Dorforth Drive.

Two people were home when the fire began. An FCFRD firefighter was driving by, after going off duty, when he saw the fire. He immediately stopped, called 9-1-1 and knocked on the door of the townhouse to alert the occupants to the fire. Thanks to his quick action, they were able to safely evacuate before the fire departments arrived.

The first-arriving units saw smoke showing from the roof of their three-story, middle-row townhouse. Crews quickly located the fire on the rear deck and discovered that the flames were rapidly extending to the roof and attic. A second alarm was then requested.

Firefighters were able to swiftly bring the blaze under control, which prevented fire spread to adjacent townhomes. No one was injured, and investigators determined that the fire was accidental and started on the rear deck.