‘Does This Really Benefit the Community or McDonald’s?’
Votes

‘Does This Really Benefit the Community or McDonald’s?’ 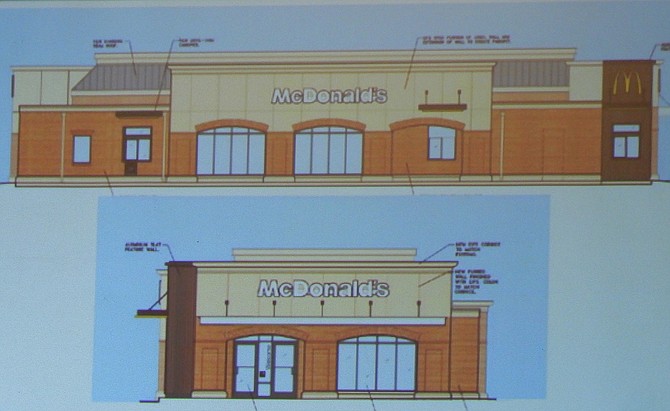 Artist’s rendition of the front of the new McDonald’s at the Village Center.

Once again, another deeply unpopular development proposal has landed on the doorsteps of Centreville residents. And it’s leaving them feeling both outraged and betrayed.

McDonald’s wants to build a free-standing restaurant with drive-through lanes in the Village Center shopping center along Stone and Braddock roads. But nearby residents say it’ll bring them unwanted traffic and noise – and break a decades-old, legal pledge forbidding such uses there.

So it’s no wonder they packed the Aug. 15 meeting of the Sully District Council (SDC)/West Fairfax County Citizens Assn. (WFCCA) Joint Land-Use Committee. And after a presentation by McDonald’s representatives and comments from the citizens, the committee voted unanimously to oppose the project.

“There are far too many issues raised by the community that have not been resolved,” said Sully District Council’s Lewis Grimm. “So we can’t support it.”

“McDonald’s has been there since 1995, but people still have COVID concerns and like being in a larger dining area with more room for separation,” explained Akin. “The drive-through lanes will be reconfigured for fast-food use, with dual ordering lanes for efficiency.”

She said McDonald’s would improve pedestrian circulation and add 141 shrubs, 32 deciduous trees and five evergreens. There’d be no lighted arches and, in response to residents’ concerns at recent homeowners’ meeting, McDonald’s withdrew its original request to be open 24 hours/day. “The existing proffers [for uses at that center] say 6 a.m.-10 p.m.,” said Akin. “So we changed it to 6 a.m.-midnight for the drive-through.”

“We don’t expect any sound spillover to go into nearby residences because of new technology,” she added. “Employees can turn up the volume on their headsets to hear the customers better. And existing berms and additional landscaping will also help mitigate sound. There’ll be a fully enclosed, secured, trash enclosure, and the restaurant manager and others will walk the site regularly to keep it well-maintained.”

Traffic engineer Les Adkins said a sidewalk would be added by the Giant Food store, plus a new, striped, pedestrian crossing with scored concrete and signage. And a tree at the exit site would be removed so people could better see oncoming traffic.

“Have you assessed the difference between parking supply and demand?” asked Grimm. “Where would disabled-parking spaces be located, and how many would there be?’ Akin said two such spaces would have direct access to the front door, and Adkins said the shopping center has ample, shared parking.

“When this shopping center was first built [in the late 1980s], there were proffers regarding no fast-food restaurants,” said SDC’s Jay Johnston. “What’s the justification now?”

“Over the years, there have been amendments to the proffers to allow inline, fast-food restaurants and a drive-through bank,” replied Akin. “So things have evolved.”

But, countered Johnston, “Homeowners bought property nearby, knowing those [original] proffers were in place. And a bank doesn’t have the long hours a restaurant does. You’re putting a fast-food restaurant in the middle of several residential communities and impacting them with all the traffic it’ll bring. And Braddock Road has more traffic now coming from Loudoun County, so it’s already congested. So who does this really benefit – the community or McDonald’s?”

In response, several residents in the audience said, “Not us.”

Adkins said it’ll benefit the community and Braddock’s traffic will continue, regardless. During morning and afternoon peak hours, he said the restaurant would generate about 60 cars, or 120 total during those periods. “Over 24 hours, there’s approximately a net increase of 570 vehicles – which doesn’t meet VDOT’s 5,000 trips per day requirement for an external traffic study,” he said. “That’s why we’re focusing on the shopping-center traffic to make it as safe as possible.”

“The issue is the exit,” said WFCCA’s Steve Chulick. “Some people are making rights, and others, lefts, and some are coming in,” he said. “And a major intersection is right there. It’s a mess, and you’re making it worse with cars exiting the drive-through, coming in from Braddock and exiting onto Braddock. And at rush hour, cars are backed up northbound on Braddock to get to the Braddock/Stone/Westfields Boulevard intersection.”

Akin said the crosswalk and signage will help pedestrians cross, and “We’ll work with VDOT and Fairfax County on traffic-calming measures.”

“You might want to consider a right turn only there,” said SDC President Jeff Parnes. “It’s an accident waiting to happen.” Adkins said they’d also look at possible signal timing or other improvements at that intersection.

Earlier, Akin and Adkins said the residents and customer base favor this new, drive-through, but Johnston strongly disagreed. “I live one block from the site, at Braddock Ridge and Westfields,” he said. “The neighborhood doesn’t want this. We already get trash and loitering there, and we like it when the noise dies down. We want to feel safe and not have to have noise late at night.”

Then residents – who mainly just gave their first names – commented both in person and via the meeting’s online stream. “We don’t want all the extra noise and traffic this’ll create,” said Jessica. “But we feel McDonald’s isn’t hearing us.”

“People zoom fast when leaving the Giant, and there are school buses that pick up kids nearby,” said Kim. “Loitering will increase substantially. High-school students after a football game will say, ‘Hey, let’s go to McDonalds.’ These are serious concerns.”

Madeline Towle lives a half-mile away on Stone Road. “We’re working on our traffic problems and don’t need a corporation to come in and exacerbate them,” she said. Regarding McDonald’s proposed pedestrian improvements, Toll said, “Middle-school kids are going to ignore them and go across the parking lot, and they could get hurt.”

Sully Station II’s John Walser asked how many cars leaving the shopping center could stack at that site before impeding traffic there, and Johnston answered, “Three.”

Noting McDonald’s “well-branded trash” is already visible throughout the Village Center, Walser asked, “Why do you think you’ll be able to monitor trash in a drive-through, when you can’t do it for your inline restaurant now?”

His wife Kate wondered how the added shrubbery would affect drivers turning left from Stone onto Braddock, plus going in and coming out of the center. “It’s hard to see now,” she said. Adkins said they won’t put anything there that would impede people’s vision.

She also stressed that noise from people ordering “is the least of the problems. The noise is mainly from the cars coming in – honking, radios blasting, and loud mufflers well past when we’re trying to go to bed.”

Besides, added Cynthia Long, “This isn’t a community that goes out for dinner between 10 p.m. and midnight.”

Sequoia Farms resident Marsha said, “If two lanes of ordering will go into one lane of food delivery, it won’t work – and people won’t want to go there again. Why does McDonald’s want to go there, with so many barriers to overcome?”

But Centreville’s Michael Leahy said, “We don’t live in our community to advance McDonald’s business model. McDonald’s makes sunny pledges, with no guarantees to fix the problems it’ll inevitably bring to the community.” He then urged residents to email the Board of Supervisors and ask it to oppose this issue, too.

“Vehicles entering the drive through will need to cross in front of those ready to exit, where there’s also a pedestrian crosswalk,” said Carol Hawn. “There’s too much going on [there]. McDonald’s needs to admit they’re doing this, not for the ‘neighborhood,’ but for the thousands of vehicles that’ll be using the new, improved Braddock ‘speedway’ from Loudoun to the 28/66 interchange.”

“According to the county zoning ordinance, ‘Pedestrian and vehicular traffic associated with the use must not be hazardous or conflict with existing and anticipated traffic in the neighborhood,’” said Jim Hart. “The bank had very little traffic, compared to a McDonalds drive-through.

“And even if they drop the 24-hour request, how many uses get approved and then come back, a few years later, trying to expand operations to 24 hours? Given the pattern of incremental weakening of the promises, why should anyone expect otherwise?”