Macbeth ‘Will Grip the Audience’
Votes

Macbeth ‘Will Grip the Audience’

Chantilly High grads are in outdoor production of ‘Macbeth.’ 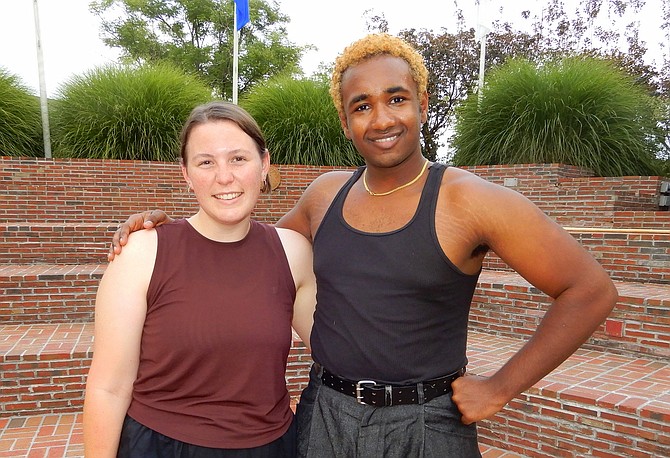 Two Chantilly High grads are in City of Fairfax Theatre Co.’s (CFTC) upcoming production of “Macbeth.” They are Maggie Shircliff and Amro Ibrahim, who graduated in 2016 and 2020, respectively.

Featuring a cast and crew of more than 30, this chilling tale of witchcraft, power and bloodshed shows what can happen when good people are consumed by insatiable ambition that threatens to destroy a nation.

Performances are Thursday-Saturday, Sept. 8, 9, 10, and Sept. 15, 16, 17, at 7:30 p.m. (rain dates TBD) at Veterans Amphitheater, behind Fairfax City Hall at 10455 Armstrong St. Attendees are encouraged to bring blankets, lawn chairs and picnic dinners and enjoy a riveting evening of drama under the stars.

Tickets are adults, $25; and children, $15, at https://www.fairfaxcitytheatre.org/productions/macbeth. Discounts are available for groups of 12 or more; contact CFTCBoxOffice@gmail.com for details.

Shircliff portrays one of six witches in this production, as well as several other characters. In CFTC’s show, three older witches are controlling three younger witches like puppets. “I’m one of the older witches,” said Shircliff. “They symbolize how little control we have over our own decisions.

“The younger witches are more fun, like Wednesday Addams, and what you picture as traditional witches. The older ones are more like demons, and you only see their eyes. They’re shadowy figures and forces that influence everyone’s actions. It’s an ensemble feel; we have individual speeches and also really cool moments when we’re all speaking together. There are a lot of slow, twisting movements as we control the other witches, plus interesting technical elements where we create a star as our witches’ symbol.”

Enjoying her role, Shircliff said CFTC’s version of “Macbeth” offers “an interesting take on the witches, and it’s been a fun challenge to explore how to act with my body when people can’t see my face.”

“This is definitely one of the best cuts of ‘Macbeth’ I’ve seen, highlighting the important parts,” she added. “And through our movements and expressions, we bring the story to life and make it understandable and enjoyable for everyone. The audience will also like the battle scenes and the unique aspects the directors bring to our show.”

Ibrahim also plays several roles, including Murderer One. “He’s a sleazeball who’ll do anything for money,” said Ibrahim. “He does questionable things that have earned him his descriptive name. He’s interesting to play because I can get into the darkness of his character.”

“In scenes where I can explore more of him through his conversations with others, I get to show more depth to him,” continued Ibrahim. “And what’s fun is that he’s in two of the three fight scenes. I have martial arts experience, and that’s helped me with the fight choreography. It allowed me to learn these fight sequences really well and execute them with the grace necessary to be technically safe.”

As for the audience, he said people will like the actors’ movements onstage and “all the gorgeously choreographed war scenes, which are just as spectacular as any dance. Also, the directors condensed the script so the story moves quickly and will grip the audience right away. This show is the culmination of community theater; the cast loves the process of putting on a play, and I’m enjoying being in the presence of the other actors.”

The directors are Stephen Shetler and Julia Tasheva, who are married in real life. He’s a classically trained actor, and she was a mime, puppeteer and dancer, so their combined talents enable the actors to do more than just stand and speak. He’s also the lighting director, and she’s one of the costume designers and in charge of sound.

“LED lighting lets us change colors and show the time of day and mood of the scene,” said Shetler. “It’ll be like rock-and-roll and dance lighting, emphasizing the body and space to reinforce the movement. Many times, actors’ faces won’t be fully seen; the light will come at them from odd angles.”

Regarding the music, Tasheva carefully chose each selection to support the mood of the action onstage. As for the costumes, she said, “All our soldiers have armor, and their uniforms are a synthesis of different colors symbolizing their characters’ individual qualities.”

A master of movement, she’s taught the actors to express themselves with their bodies and gestures. And, she said, “We also use ropes, strings and sticks to show the audience things they don’t expect.” Even fabric is employed, with a large, red cloth descending over a battlefield to symbolize the bloodshed there.

Overall, said Shetler, “Macbeth was a fairly heroic, trusted man, loved by his friends. But his and his wife’s ambition sends them both into a descending spiral of paranoia. When he hears the witches predict he’ll become king, he initially thinks, ‘OK, if it happens, it happens.’ But then he realizes he can take action. So did the witches compel him, or did he do it of his own, free will?”