An early morning fire, last Sunday, Jan. 30, caused nearly $9 million damage to a building on the campus of Woodson High in Fairfax. It’s an administrative building owned by FCPS but not physically connected to the high school.

Units from both the Fairfax County and City of Fairfax fire departments were dispatched to the scene, around 3:07 a.m., for a reported building fire in the 9500 block of Main Street. First-arriving firefighters discovered smoke and flames billowing from a two-story structure and immediately struck a second alarm to bring additional personnel and equipment to their aid.

Meanwhile, firefighters began an interior attack on the blaze. However, after observing only minimal improvements – as well as cracks forming in the exterior brick wall – crews quickly transitioned to a defensive operation from the outside. Indeed, a portion of the roof and an exterior wall eventually collapsed.

Firefighters were able to bring the fire under control in approximately two hours. But fire crews remained on the scene for several hours afterward to extinguish hot spots present in several void spaces.

The facility was unoccupied when the fire broke out; area residents saw smoke coming from it and called 9-1-1. In addition, the building’s fire alarm activated. Fire investigators determined that the blaze was accidental and started in an office. However, the exact cause of the fire is listed as undetermined. Based on tax records of the building and its contents, damage was estimated at about $8,851,409. 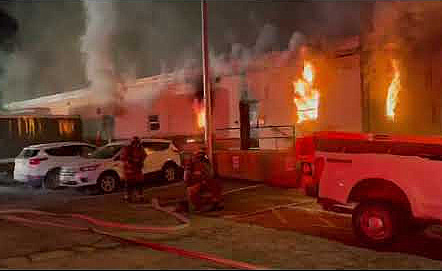