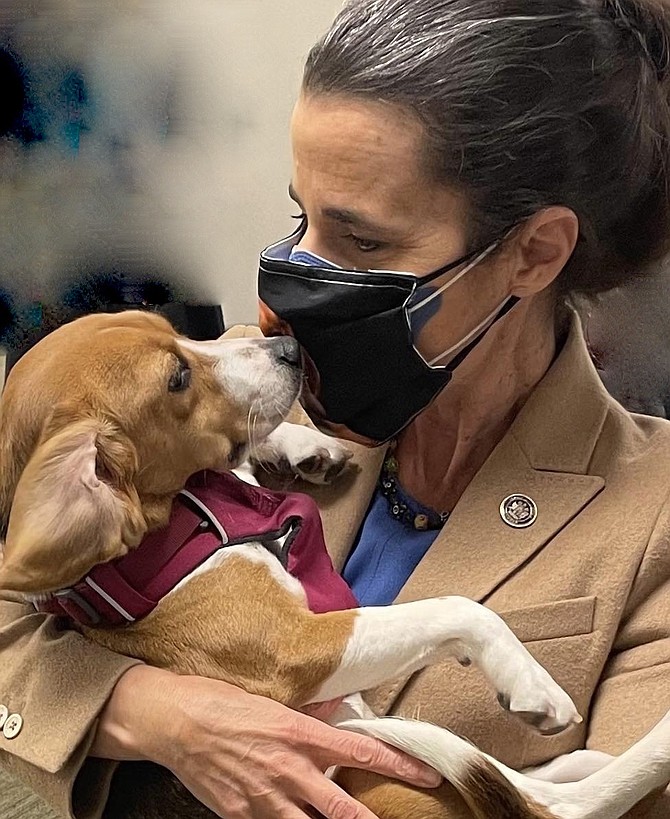 Sen. Jennifer Boysko shares a moment with Tannis, a research Beagle surrendered to Richmond SPCA, which found her a loving home.

As the Virginia General Assembly moves to the mid-point of its 2022 session, several animal welfare bills remain under consideration. This session both Houses took up possible regulation of breeders who raise animals for research; such breeders are not currently regulated by the Commonwealth. Ongoing issues, over several years at the only research animal breeder currently in the state, located in Cumberland County, 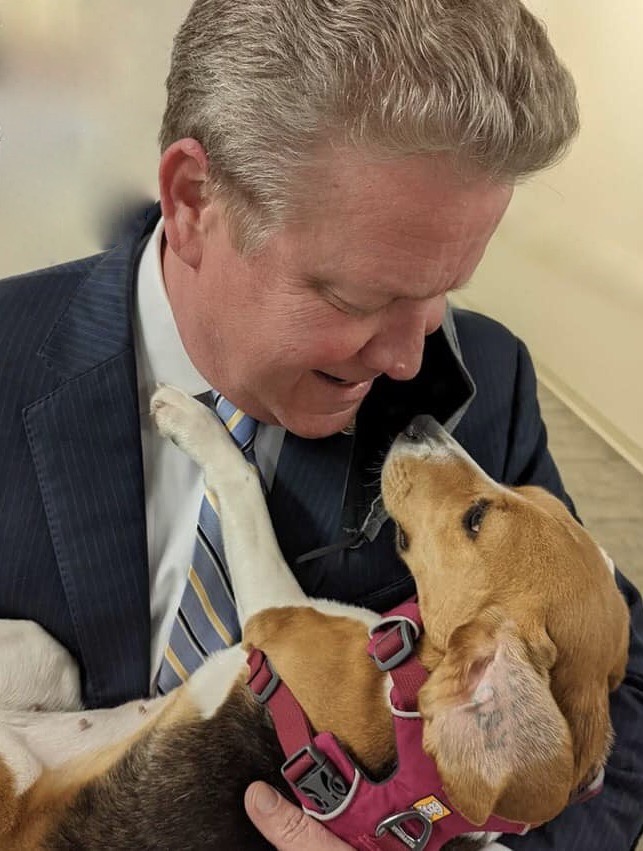 Tannis is comforted by Sen. Bill Stanley, whose bill would make adoption consideration a first alternative required for research animals prior to euthanasia.
prompted legislators to act. Eleven such bills were sponsored this session. Bills in the Senate took a one more “last chance” approach; while those in the House were written to shut down the current operation and any future violation-plagued research breeders.

Envigo, a large Indiana based corporation, which breeds Beagle dogs for research, has been cited for violations by inspectors from the U.S. Department of Agriculture’s Animal and Plant Health Inspection Service (APHIS). The site is currently under investigation with more charges expected in coming months. The facility is a large “factory farming” type operation, spread over the equivalent of five football fields; at times housing as many as 5,000 dogs breeding 400-500 beagle puppies per month sold within the United States and to foreign customers for animal testing and research.

“Being a ‘dad’ to two wonderful beagles I personally rescued from Envigo, I know firsthand how loving, social and deserving of protection these dogs are.”

Marsden’s bill would establish an Animal Welfare Oversight Officer reporting to the State Veterinarian’s office, paid for wholly by research breeder fees, and with twenty-four hour access to the facility to assure on-going humane practices. The other Senate bills established requirements for regular reporting on animal dispositions after inspectors found 300 dead puppies; adoption opportunities for animals no longer needed in the operation as an alternative to euthanasia; and prohibiting sales to foreign entities or those U.S. research entities which conduct animal testing not required by federal law or regulation.

In the bill review process, some of the bills were amended in the agriculture subcommittee to add a “reenactment clause,” a delayed date of effect; whereby the bills would not go into law unless reenacted by next year’s General Assembly. Adding that clause would have the effect of giving the research breeder additional time to correct their deficiencies. Following the attachment of the reenactment clause, Stanley successfully introduced a senate floor amendment substituting March 1, 2023 as the date at which any additional violations would be considered under the law. His action eliminated the need for the General Assembly to act again to protect the animals; a greater reassurance to animal advocates.

Having reached the point of the General Assembly’s  session cross-over, eight of the original eleven bills, which passed floor votes in each body, move to the other for consideration.

Although animal welfare bills are often viewed differently by legislators in rural and urban areas, passage of these bills with near unanimity demonstrates legislator’s resolve to solve research breeder issues. Given the difference in approach taken by legislators, those following this issue must wait to see which will move forward.