Posters, paintings and quirkiness run in the family at Urban Redeux in Hollin Hall. 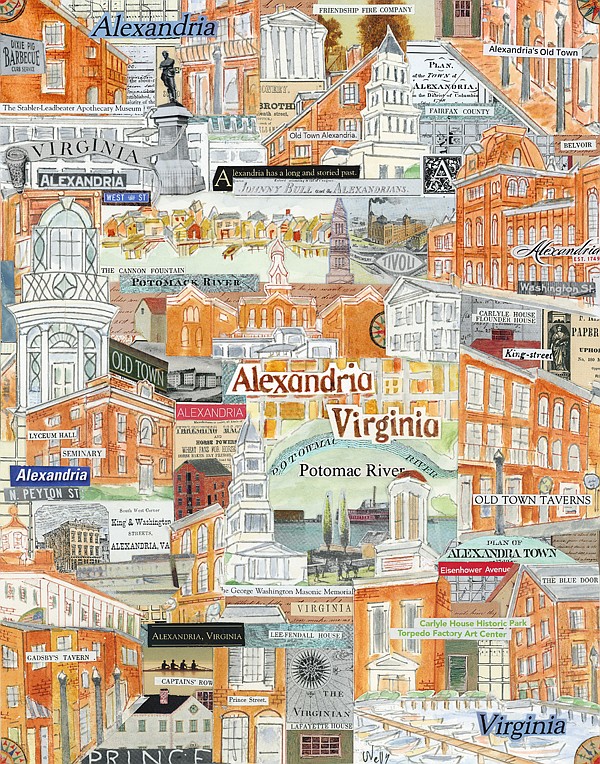 Just one of the Wendy Wells posters with local theme.

The Alexandria poster is a collage of drawings that local artist Wendy Wells put together as part of her latest poster collection featured at the Urban Redeux in Mount Vernon. Wells has done a series of posters like this that she calls “elemental art.”

“I wanted to represent the places in a unique, different way,” Wells said. 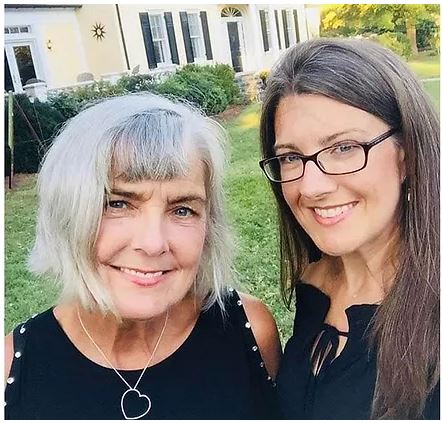 Wendy Wells and daughter Willow Wright.
She aligns her work with a creative quote from Albert Einstein: “Imagination is more important than knowledge.” This can be seen in the Alexandria poster, whether it be her sketch of the waterfront, a couple of renditions of the Masonic Temple, or the now-defunct Confederate statue that seems to poke out from the rest. This statue, called "Appomattox," stood at the intersection of Washington and Prince Streets, but as part of the effort to remove Confederate statues, it was taken down in June 2020.

Wells puts on her artist hat and pulls out her colored pencils. “I make watercolor drawings and sketches of familiar icons or vistas of Old Town such as the original Torpedo Factory wharf and other related items and then add pieces of printed vintage renderings that I collect before starting a piece,” she said. She has another similarly drawn poster of Richmond and has one coming soon for Fredericksburg.

Amongst her artistic achievements are blue ribbons in juried art shows, honors for a one-woman exhibit, an Alli Award nomination, and being recognized in the Art Expo in New York City. She’s also dabbled in costume and set design for Grammy winning artists.

Her daughter Willow Wright owns Urban Redeux, an eclectic shop in Hollin Hall shopping center where she sells art, antiques and collectibles. Everything has the “off the beaten path,” vibe to it, and the motto is “junque, funk furnishings.” There are funky lamps, statues, stuffed animals, furniture and even a table basket full of slides taken in Italy sometime in the 1970s. Who knows who the people are? People buy them though.

On one wall is a small exhibit of her mother’s art, including two abstract paintings and one gray picture of a man in a raincoat and hat, very artsy. Well’s art sense has rubbed off on Willow and Willow’s daughter, and the three get together every once in a while, for a family art fest. “All three of us love being in a studio,” Wells said.

On the art instruction level, Wells is the founding member and past executive director of the Bay School Community Arts Center in Mathews County, Virginia.

Another Side of Art

Art comes in many forms and Wells has a musical side too. Recently she branched out to guitar straps, and now has a patent for a strap she invented called the “VeeStrap.” This is a revolutionary dual-shoulder strap that evenly distributes the weight of an instrument on the shoulders using a very simple design and sturdy construction. She plays guitar too and dabbled in bands such as the Kool-Rays who played at the famed CBGB’s in New York City in the past.

Her final quip from all this creativity? “There are 'artists' and there are 'people who create' — I fall into the latter group,” Wells said.