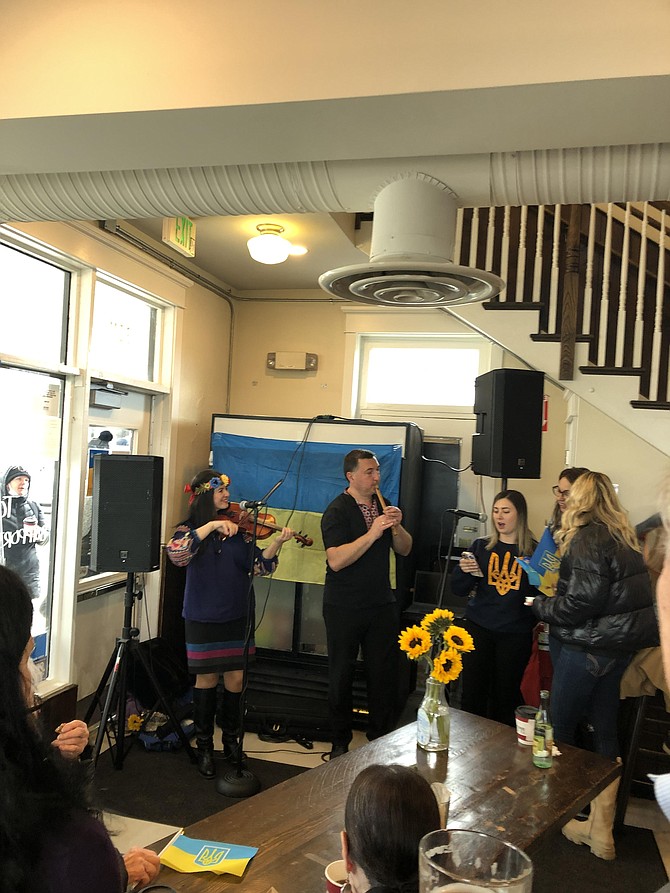 The band was a local two person violin and recorder/flute duo called Gerdan, that sounded bigger than it was because of all the people who joined in to belt out old Ukrainian folk tunes. Or maybe it was the fact that one man could play two flutes at a time.

If you’ve ever lived in a European country, you know the magic of a Sunday afternoon in the early Spring. The flowers are coming out, a band is playing, people get up to dance or sing together at tables, children dash about, grandmothers get up to chase them, laughing, and those serving up beer and snacks smile, because what’s better than this? It’s particularly poignant in former East Bloc villages where a song is more than a song: it’s a statement. When people sing about a wildflower at the foothills of the Carpathian mountains, it’s much more than that. 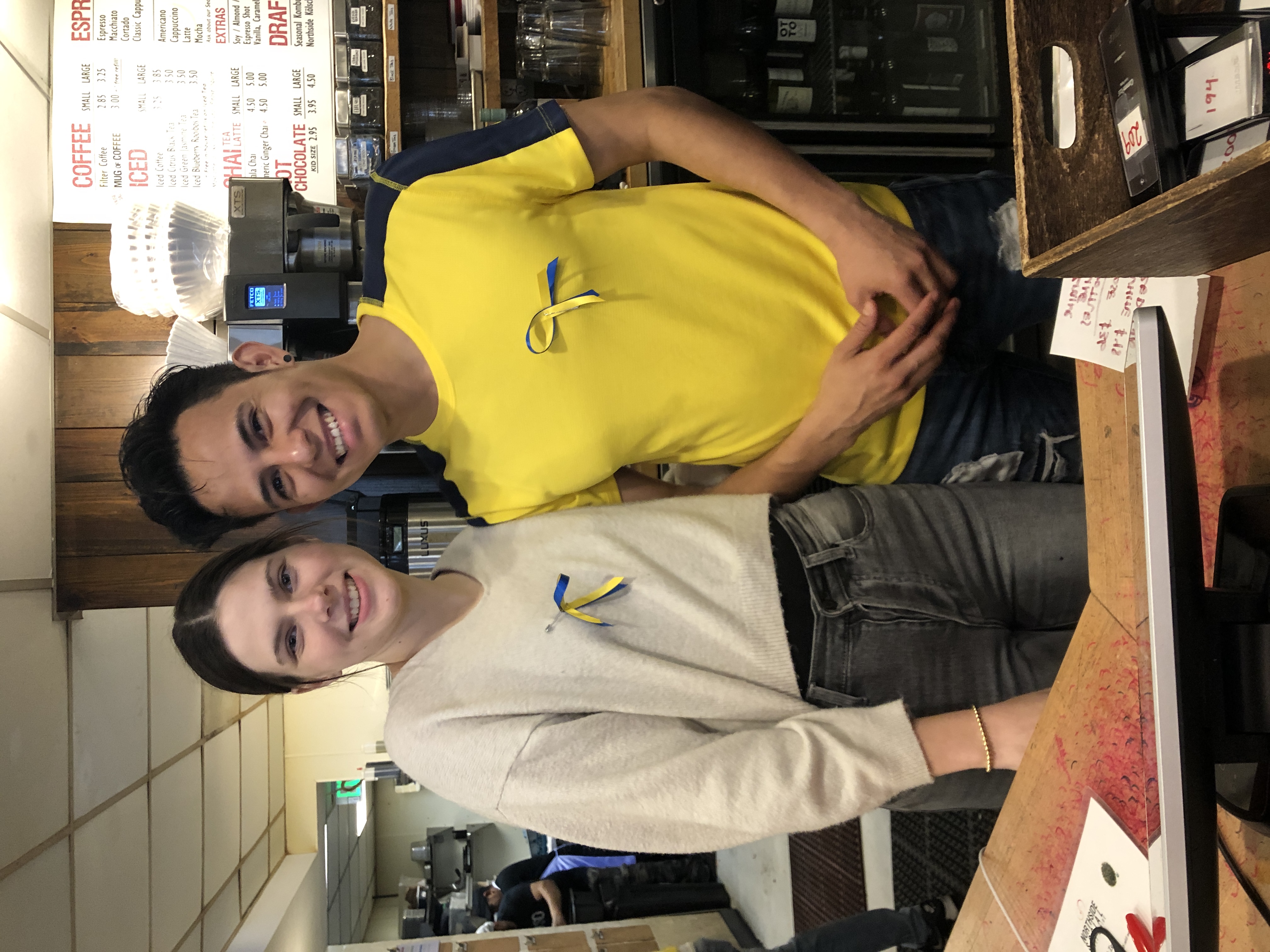 Mario Carranza and Sasha Fedorchak, baristas of the Northside Social Cafe, wearing yellow and blue as they worked the counter to support the non-stop orders on Sunday.

In Arlington, on Sunday, it was that and a happy-sad communion of neighbors supporting people thousands of miles away, in the only way they can right now. The laughter, the looks exchanged, the words to the songs handed down generations, the tears shed: it was as if Arlington, for a few hours, was that village in Ukraine. Even the weather was a bit on the Ukrainian side.

It all started when Stephen Fedorchak, owner of the Northside Social Cafe, asked two Ukrainian women who worked in the cafe what he could do to help. They were feeling the pain of the war in their home country, their absence from family, and didn’t know what to do. They told him they just wanted to help in some way and the best way seemed to be to raise money. Fedorchak paired with Arlington Sister CIty Association, for whom the Ukrainian city of Ivano Frankivsk is a sister city, and the Sunday afternoon fundraiser took shape. Arlington’s SIster City Association promotes Arlington’s international profile and creates long lasting relationships with five sister cities, and one of them is Ukrainian.

The two young women, Yuliia Mashkina and Khrystyna Nichveda, joined the musicians for a few songs and relished the sound of their Ukrainian folk tunes. “But,” they said, “We feel somewhat guilty: our families are still in Ukraine but they have power, and enough food and water.  But many of our friends in Eastern Ukraine had lost their homes, and loved ones, and had no power, no water, no food.”

To donate to the Ukraine relief fund that was the beneficiary of the fundraiser, see: https://donate.wck.org or https://www.icrc.org/en 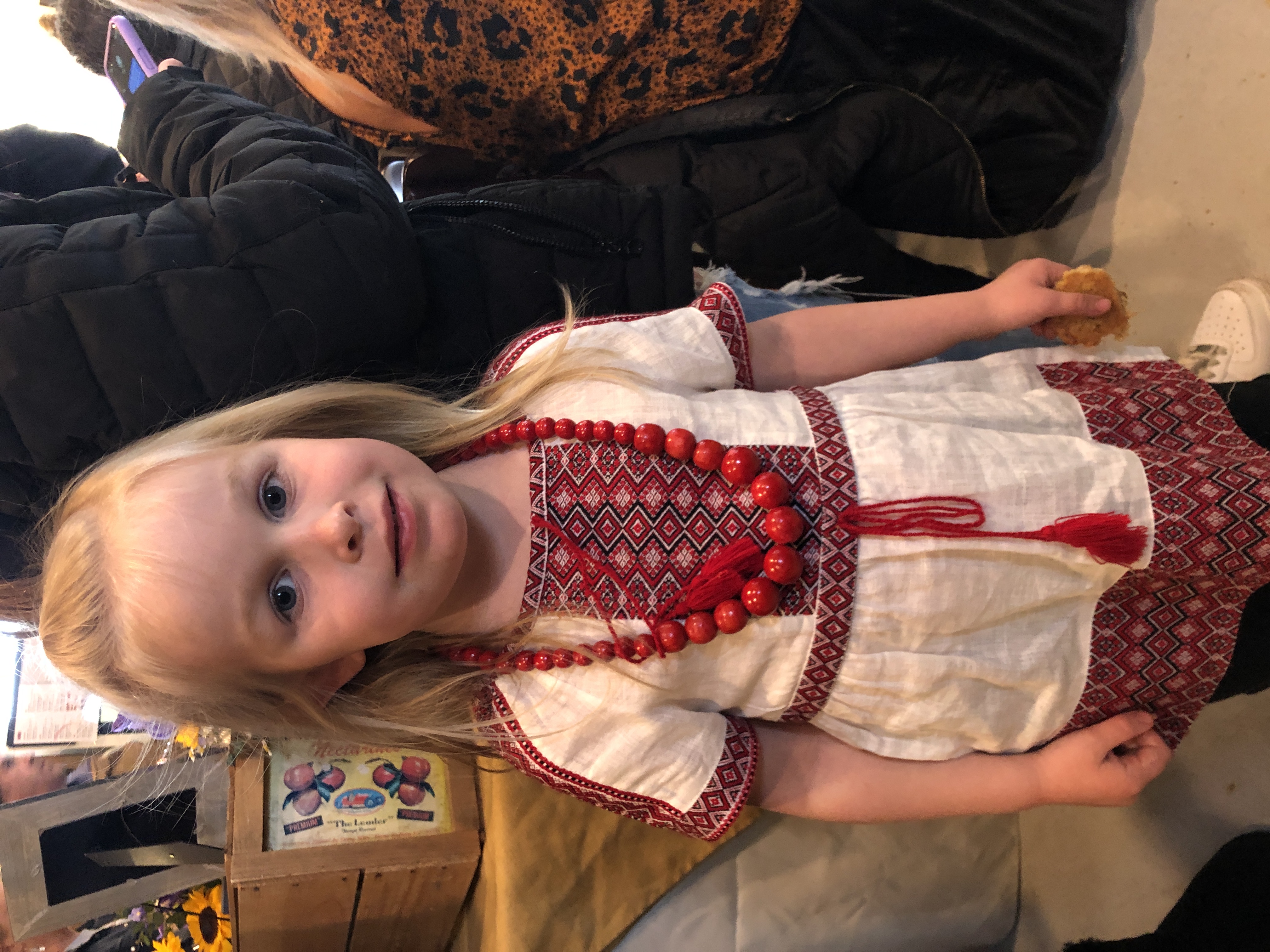 Annabel Hoyt, 6, is dressed in Ukrainian traditional garb to support the country she lived in for a few years before returning to Arlington. Her family lived in Ukraine as U.S. foreign service officers and they feel a strong tie to the country they called home, even as visitors.