SAR honors Fairfax Mayor as its Good Citizen of the Year. 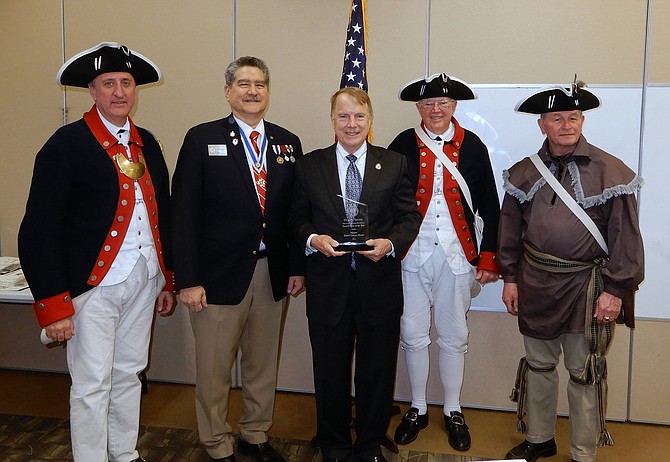 Fairfax City Mayor David Meyer has been honored by the Virginia Society of the Sons of the American Revolution (SAR) as its 2021 Good Citizen of the Year. All 30 SAR chapters across the state nominate one person for this award and, after a review process, one individual is selected. 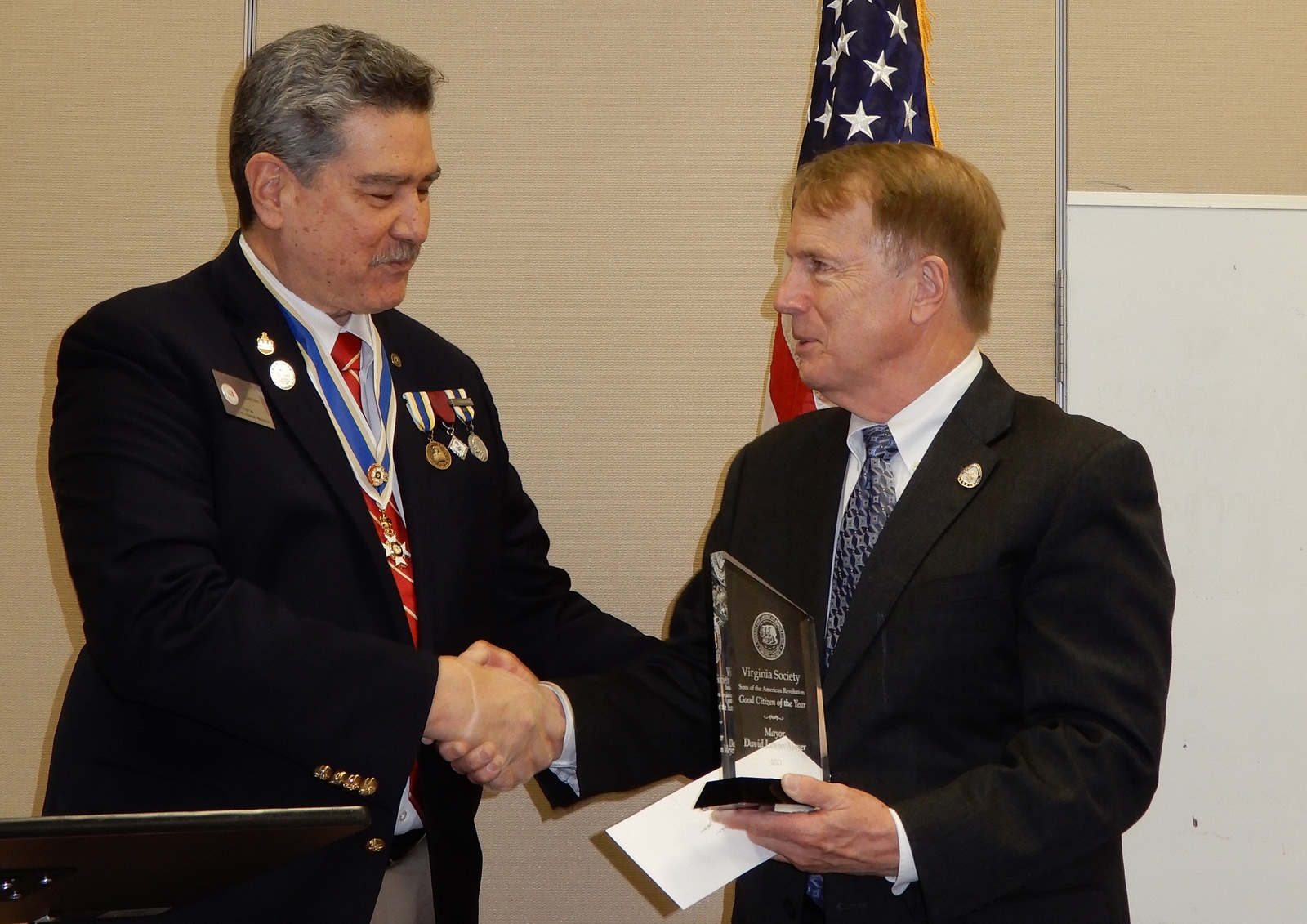 Meyer’s nomination came from the Fairfax Resolves Chapter, which has some 180 members throughout Fairfax County. His award was presented March 16 at a chapter meeting at the Fairfax City Regional Library.

“I’m humbled by the recognition and consider it a great privilege to serve with these members,” said Meyer after receiving a crystal trophy from them. “This group is one of the best-organized and active chapters in Virginia. What impresses me is the professionalism and mature, civic approach you all exhibit. It’s a great tribute to our patriot ancestors, and it’s an honor to be with you.”

In his nomination letter, Fairfax Resolves Chapter President David Cook said Meyer has served his community in leadership roles for many organizations, including:

* Church - At Fairfax United Methodist Church, he’s supported and participated in mission teams for the Appalachia Service Project to eradicate substandard housing in Appalachia. He also traveled to refugee camps in Lebanon with Helping Hand for Relief and Development.

* Scouting - Meyer is an assistant Scoutmaster and Eagle Advisor for Troop 187.

* School - He was on the Daniels Run Elementary design committee and served as President of Fairfax High’s PTA.

Meyer also served on the Board of Directors of Historic Fairfax City Inc. and co-authored the book, “Fairfax, Virginia: A City Traveling through Time.”

* Veterans - Meyer strongly supports veteran and patriotic organizations. In June 2017, he commemorated the 73rd anniversary of D-Day by traveling to Omaha Beach Memorial Cemetery in France. While there, he paid tribute to two fallen soldiers from Fairfax who died during the Normandy invasion.

For the past three years, on Nov. 11, Meyer joined other state and local dignitaries by speaking at various Veterans Day commemorations. He signed a proclamation decreeing Fairfax Resolves Day in July and participated in many other veteran and patriotic-organization celebrations. Wrote Cook: “These actions show his character and love for history and patriotism.”

* Government – He’s served five terms on the Fairfax City Council and is currently in his third term as mayor. He’s worked for improvement in residential and business zoned property as a method of attracting new businesses and their families to the City of Fairfax.

Meyer has been on the Metropolitan Washington Council of Governments Board of Directors since 2014 and is also a member of its Transportation Planning Board. In addition, Meyer represents the City on the Northern Virginia Transportation Authority and serves on the Executive Committee of the Washington Area Transit Authority. Before retiring in 2016, he was a Senior Executive Service member of the U.S. Nuclear Regulatory Commission.

In Fairfax City, wrote Cook, “Meyer has led the City to embrace a new vision for our future and to position Fairfax as the best-in-class jurisdiction in our region. He understands the importance of retaining the best of our traditions while leading Fairfax to be a superior city, both regionally and globally.”

Cook also said Meyer “strengthened Fairfax’s tax base with over $650 million in new, private-capital investment. In 2019 alone, the City’s total assessment grew 3.94 percent – the largest increase in a decade. He’s intentionally focused on redevelopment of our commercial centers that will create new sources of income for the City and region for the long term.

“In addition, David is passionately committed to support funding to keep our school facilities and programs distinctly superior. Education is the single, largest expenditure of the City, and David believes that investing in children is the best assurance that our community and nation will continue to thrive in the years ahead.”

Saying Meyer’s had a “positive, lasting impact on Northern Virginia and the City of Fairfax,” Cook concluded his letter by writing, “It is my honor on behalf of the Fairfax Resolves Chapter, Sons of the American Revolution, to nominate Mayor David L. Meyer for the VASSAR 2021 Citizen of the Year Award.”

After the ceremony, Meyer – a two-year member of the Fairfax Resolves – said he’s wanted to join this organization for 30 years, but life always got in the way. Now that he’s retired, though, he’s happy to be part of it. His father’s fourth-generation grandfather, Spencer Records, fought in the American Revolution.

Pleased to receive the statewide honor, Meyer said the Fairfax Resolves members “take seriously their responsibilities to preserve history and historic sites – especially the graves of patriot ancestors. The SAR also has a long tradition of providing scholarships to young people to further their education and become productive citizens in our democracy.”