‘Laughing from Start to Finish’ at Westfield
Votes

‘Laughing from Start to Finish’ at Westfield 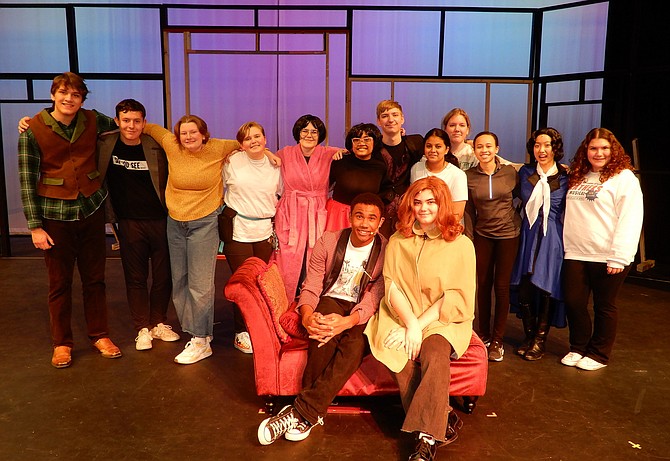 Most of the cast members of Westfield High’s upcoming Cappies show, “The Play that Goes Wrong.”

<36hd>‘Laughing from Start to Finish’

Featuring a cast and crew of nearly 50, Westfield High will present “The Play that Goes Wrong” as its Cappies show. This acclaimed comedy won London’s Laurence Olivier Award for Best New Comedy, and Westfield’s now bringing it to the local community.

Show times are Thursday-Friday, Dec. 1-2, at 7 p.m., and Saturday, Dec. 3, at 2 and 7 p.m. Tickets are $15, adults, and $10, students. Cash or checks only at the door, but all seating is reserved, so online purchases at www.westfieldtheatre.com are strongly recommended. 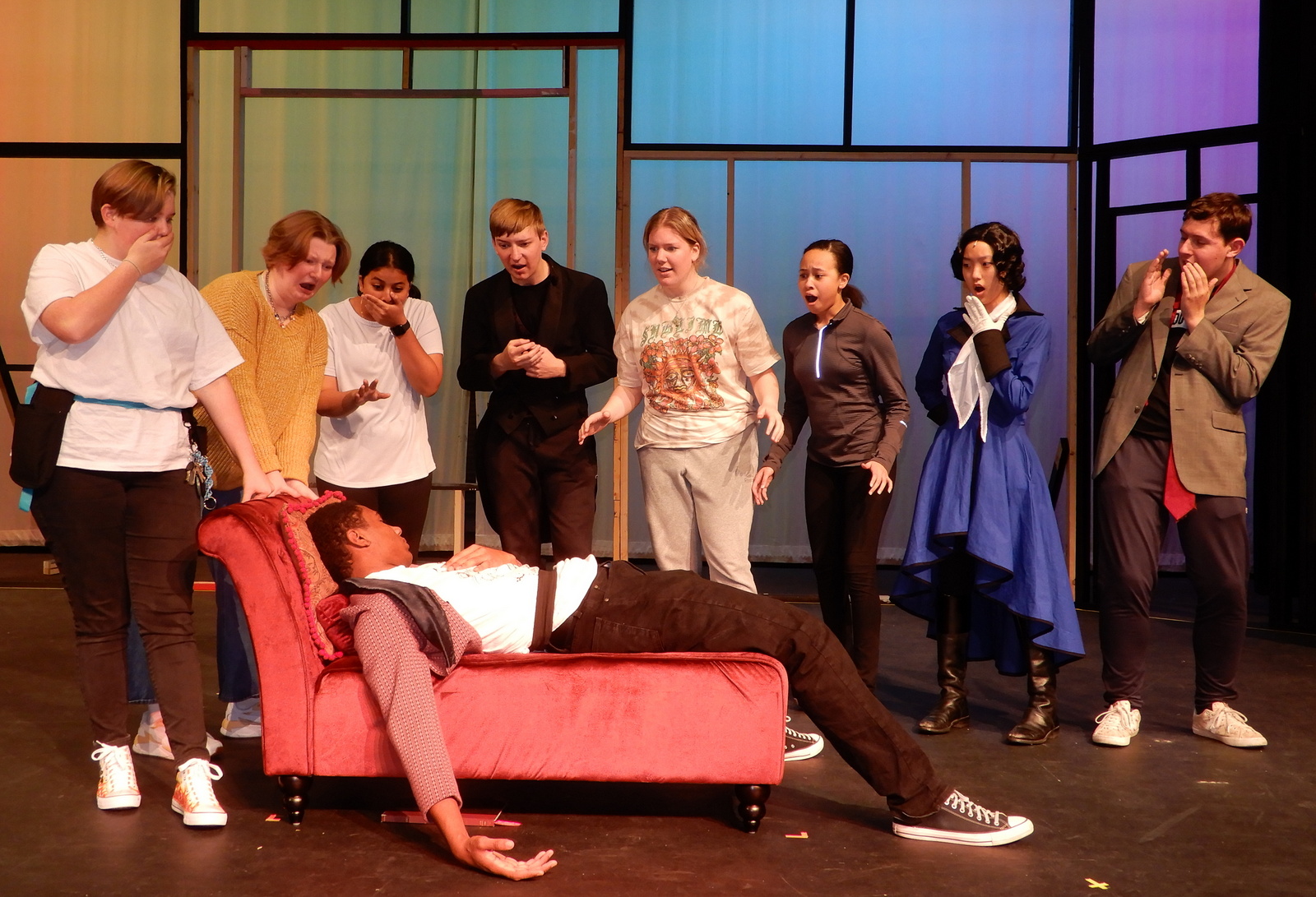 In the play-within-a-play, stagehands and relatives of Charles Haversham discover him (Elias Collier) dead on the couch.

The story is about the Cornley Drama Society, which is putting on a play called, “The Murder at Haversham Manor” – and during its opening night, everything that can possibly go wrong does. So Westfield’s production is about this play within its own play, and all the actors portray other actors, as well as the characters they’re playing in the murder mystery.

“People will be laughing from start to finish,” said Director Enza Giannone-Hosig. “There’s never a dull moment. I chose this play because this group of young people really enjoys and excels at comedy, so I wanted something fun for them.”

The show itself, she said, is extremely technically challenging because of all the special effects that have to happen. For example, pictures fall off walls and there are some sword fighting mishaps.

“But we’re ready for it, and the students are rising to the challenge,” said Giannone-Hosig. “This play showcases their abilities to do that – highlighting the skills of our actors and technicians. It also reminds us that theater artists will put their hearts and souls into making sure the show goes on, the audience is entertained, and people get their money’s worth. Their passion for theater keeps them going, no matter what.”

Senior Elias Collier portrays Jonathan, who always wanted to be an actor and, hopefully, make some money. He’s engaged to Joe, but their friends think they got serious way too soon, since they only recently met. “Jonathan’s outgoing and easy to get along with, but quickly gets overwhelmed and anxious when things go wrong,” explained Collier. “In the mystery, I play Charles Haversham, who dies in the first act.”

Enjoying his role, he said, “All these characters are blank slates, but we all came together to give each one a back story, so we’d know how they’d interact with each other. The things that go wrong with Jonathan are physical, and I like getting thrown around. And though we’re American actors, we have to speak in British accents for the murder mystery.”

Collier said the actors will make the audience realize that the cast members of the mystery can act well and that the things going wrong in their play are out of their control. “It’s a very funny show, and the humor will appeal to all groups,” he said. “There’s something for everyone.”

Playing actor Rachel is sophomore Caitlyn An. “Rachel has a big ego and wants to be the one in charge; and even if something messes up, she pretends like everything is fine,” said An. “And when her fellow cast members accidentally make a mistake, you can see by her words, actions and facial expressions how she feels about it.”

This is An’s first lead role so, she said, “There’s a lot of memorization and time onstage. It can get exhausting, at times, but I know that, in the end, it’s going to be rewarding. So I think of that when I want to push myself further. Rachel’s the opposite of me; she’s very confident and thinks highly of herself, but I doubt myself a lot – so getting this role made me feel more self-assured.” 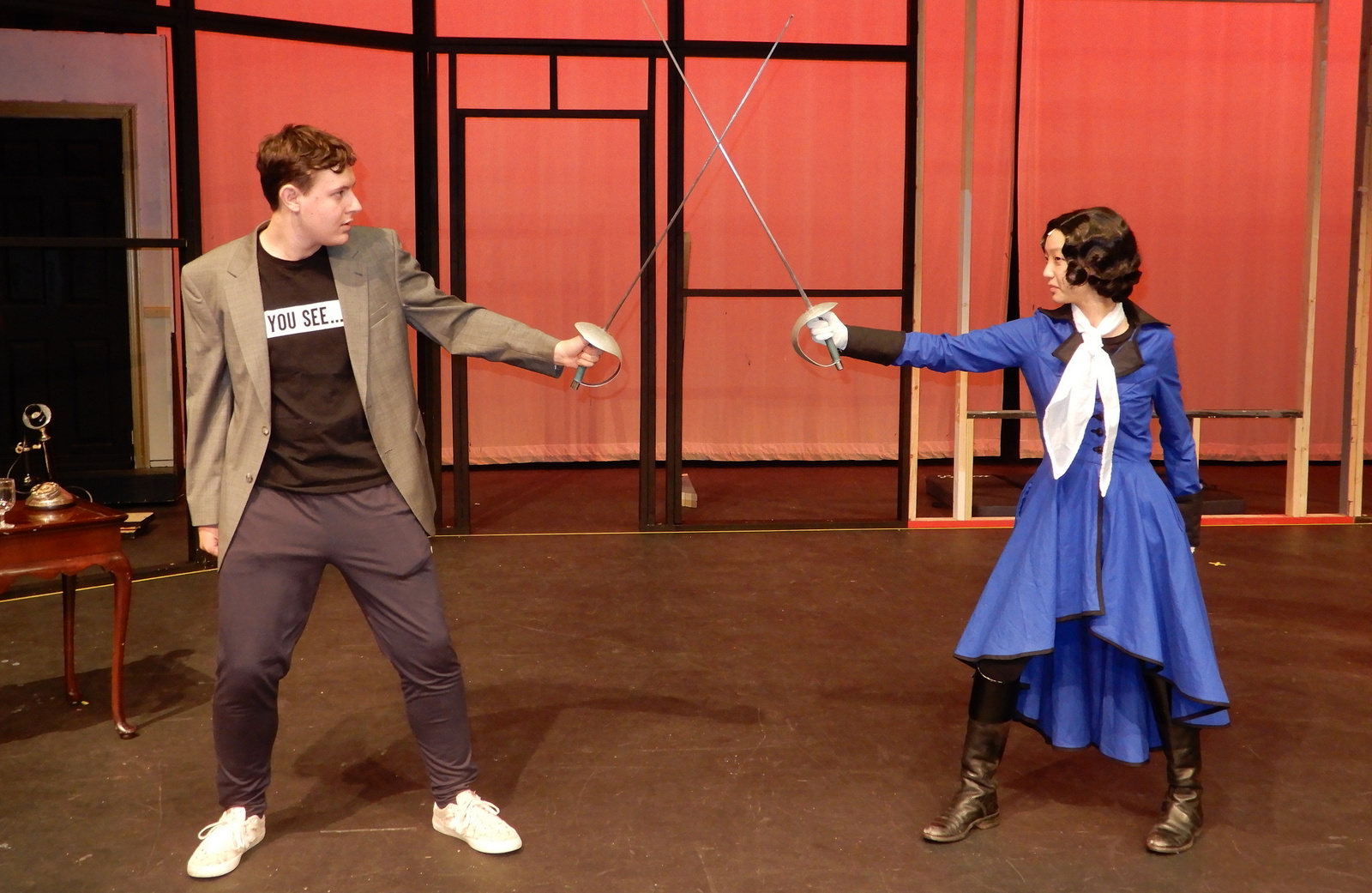 Noting that last year’s Westfield shows were dark and serious, An said this year’s offerings are happy and funny. “Everyone loves humor, and this play shows another vibe of what Westfield is capable of doing,” she said. “This is the first show where we get to do some improv, which is also different from our other shows. And it keeps drawing in the audience because they’re eager to see what’ll go wrong next.”

Junior TJ Craypoff portrays Max. “He’s the definition of an attention hog,” said Craypoff. “He really loves audience interaction. If they’re looking at him and laughing at what he does, he’s happy. He’s also one of the newer and nicest cast members. He’s friendly to everyone, charming and a little naïve.”

Craypoff likes playing this character because he usually portrays more serious ones. “But Max is more open, and I can create his onstage personality,” he said. “So there’s a lot I can do with him.”

He said the audience will like this play; it’s different. “Most times, when you go to a show, you sit and watch what’s happening onstage. But in this show, we continually interact with the audience, asking people, for example, ‘Can you fix this?’ or ‘Where can we find that thing we lost?’ and it leads to funny dialogue. It’s really a blast getting to perform this show.”

Senior Emily Miller is the production’s costume designer, heading a team of two other students, Natalie Kattas and Ameerah Byfield, plus some parents. The majority of the costumes are either handmade or embellished. There are also both modern-day costumes, as well as period ones worn in the 1920s-era murder mystery.

Some of the “made from scratch” costumes for the mystery, said Miller, include a lacy red Flapper-inspired dress; a blue riding coat for an equestrian; and a purple-velvet suit coat for Charles Havesham. Furthermore, certain characters in the mystery have connections to each other, and Miller underscores their ties by dressing them in similar colors.

“For example, two characters are having an affair with each other,” she said. “The woman in the red dress is involved with Max, so he wears a gray suit with red accents.”

Miller loves designing costumes and hopes to someday do it professionally. “I get to show my creative side and make something tangible,” she explained. “It’s useful art with a purpose. Costumes tell a story and can be used again in the future for a different show. Even our stage manager and sound-and-lights person for the mystery wear costumes inspired by Westfield alumni who performed those roles in the past. It means a lot to honor them this way because we’re a family here.”