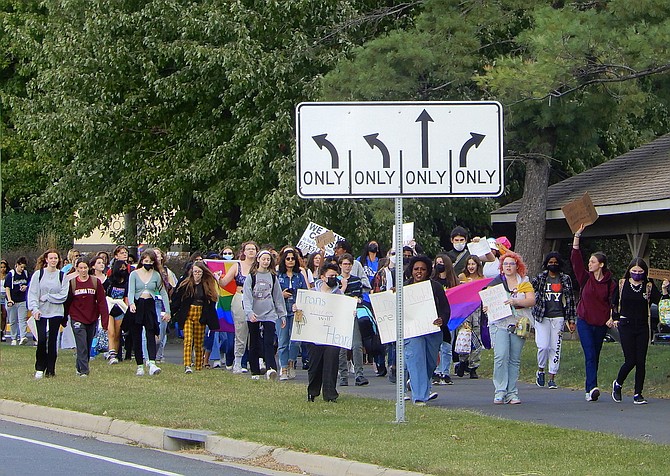 “I came to school to learn,” said one boy. “I didn’t come here to fight, get harassed or called a girl. And I learned that, as a community, we can scream for help, but we are never heard.”

He was addressing some 200 students last Tuesday, Sept. 27, joining more than 12,000 across Virginia who walked out of their schools to protest Gov. Glenn Youngkin’s proposed new policies targeting trans youth. After several speeches outside the school, Chantilly LGBTQ students and their supporters then marched to the nearby Greenbriar Town Center and back.

Chanting “Trans rights are human rights,” many wore rainbow, bi and other pride flags around their shoulders. And several carried signs reading, for example, “Protect Trans Kids;” “You Can Try to Hide Us, but We Won’t Go Away;” “Yes, I am in the Right Bathroom;” “Equality between Students” and “My Identity is Not a Tragedy.”

If Youngkin’s policies are approved, the Virginia Department of Education would: Prohibit schools from protecting closeted students and require school districts to forcibly out them; ban gender-neutral pronouns; bar trans students from using restrooms aligning with their gender identity; and allow people to misgender and deadname (use someone’s birth name, instead of the one they’ve adopted upon transitioning) students.

These policies would also allow parents to deny a student access to school- counseling services, regardless of the student’s wishes and mental health. They’d also remove provisions requiring schools to minimize gender segregation in extracurriculars and train school mental-health professionals in supporting LGBTQIA+ students. And they’d prohibit students from socially transitioning and expressing their gender identity.

Sophomore Lily Payne organized Chantilly’s walkout and was pleasantly surprised by the large turnout. “I thought about 50 people would come, and we got about 200,” she said.

Saying Youngkin’s policies would affect the lives of “more than a million students” in Virginia, Payne told the crowd, “We appreciate everyone who’s taking time out of their school day to stand up for either your rights or your classmate’s rights.” Mary P. said people may comment on the proposals through Oct. 26, and she urged the students to do so at https://townhall.virginia.gov.

The young boy who said he just wants an education told attendees, “I came to school to make a better future, in hopes of saving my community. All I want is a fair shot to learn – but it’s hard when your entire day is full of mistreatment.”

“We need to fight for our rights,” said student Allina. “It’s messed up that our parents have to put it in writing to the school to request basic respect for us – and to use my preferred pronouns and name.”

Senior Brian Ng, who’s straight, spoke as an ally. “When he ran for governor, Youngkin claimed he wanted to return excellence to our schools,” said Ng. “But in his world, excellence means shunning transgender students from our school community, making them feel inferior and terrorizing them to comply with rules conflicting with their identity.”

He said if straight students were forced to use a restroom of the opposite gender, they’d be “vehemently opposed” because they don’t identify with that gender. “So imagine how you’d feel if a governor who doesn’t know your life, situation or how many times you’ve struggled with your identity made you use that bathroom,” said Ng. “It sounds more like a policy of a right-wing, autocratic government, not the American government.”

He said Youngkin doesn’t know how many times trans students were beaten up and were the brunt of slurs simply for existing. But, added Ng, “Understanding the importance of acceptance and mitigating their pain is what Chantilly students do. We provide a safe haven for our trans youth; but right now, our school’s being forced to abandon that responsibility.

“We all need to stand together and show our state government and America that Virginians are not complicit – and we won’t stop until we defeat this hateful policy. Write to the governor and send emails to defend the values of our community.”

A female student referenced research stating, “The more support queer youth have, the lower their rates of depression and anxiety.” She told the crowd, “These new policies will effectively ignore our needs and target and harm us. Misgendering and deadnaming is a common practice used to bully queer people – and under this state policy, it’s fully protected. And trans kids in elementary and middle school won’t be able to fight on their own, for fear of being outed.”

A sophomore girl acknowledged all the LGBTQ people of color at the walkout. “Our issues and lives matter, too,” she said. “I walked out today because I won’t let a governor I couldn’t even vote for take away basic rights from me and my community. We’ve worked so hard and come so far, and I won’t watch it all fall down now.”

She’s seen firsthand the damage caused when minors in “unsafe households” are outed, plus the “severe emotional and mental issues” brought on by their constant deadnaming and misgendering. “I know there’s a kid in elementary school who feels different, is trying to figure out their identity and needs a better world than this one,” she said. “I know because I used to be that kid. But today, we’re standing up for ourselves, and we won’t go down without a fight. Our safety is our right.”

During the march, a straight sophomore boy said he was participating for his brother, who came out to him when he was in sixth grade. “I didn’t even know what it meant,” he said. “But ever since, I’ve supported him.”

Sophomore Alina S. said, “Both me and my younger sibling identify as transgender and lesbian, and I’m also gender-fluid. Growing up, I didn’t know what trans or LGBTQ was, and I want to make sure there’s a safe space for her to grow up and that she gets more education about it than I did.”

“Not everyone identifies with their biological gender, and reinforcing it at school is basically psychological torment,” she explained. “Often, kids have to hide their gender identity from their parents for years – and forcing them to reveal it is cruel and unusual punishment.”

Together, students Finn and Alli carried a large sign saying, “Y’all means all” against a background shaped like Virginia. Finn said he wasn’t marching for himself, but “for my friends, because I don’t want them to face lives where they’re constantly bullied and have their existence denied.”

As for Alli, she said, “I’m a senior, and when I was in middle school, I had a friend who wasn’t treated correctly because of their gender identity – and they took their life; we were both 13.”