County roads continue to be hazardous for pedestrians. 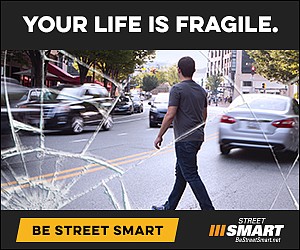 Pedestrian fatalities on roads in Fairfax County continue to increase with two people killed in early October, and one in August, raising concerns as the season slips into days with less daylight, increasing the danger out on the busy streets.

On Thursday, Oct. 6, Melodie Kiem, 53, of Fort Belvoir was crossing Richmond Highway at the Tully Gate intersection from the median to the eastern side of Richmond Highway, against the pedestrian cross signal, the Fairfax County Police said. The driver of a 2015 GMC Terrain was traveling northbound on Richmond Highway with a green light and the right of way. Kiem was struck in the roadway, and the driver remained on scene. Rescue personnel responded and pronounced Kiem deceased at the scene. Preliminarily, speed and alcohol do not appear to be factors in the crash, police said. The investigation remains active, and details of the investigation will be presented to the Office of the Commonwealth’s Attorney for review.

A few days later, a 63-year-old pedestrian died after being struck crossing West Ox Road in the central part of the county. According to FCPD, Ligia Jeannette Herrera Betbeder, 63, of Fairfax, was crossing West Ox Road north of Legato Road from east to west, outside of the crosswalk. The driver of a 2015 Honda Civic was traveling southbound on West Ox Road and struck Betbeder in the roadway. The driver of the Honda remained on scene. Rescue personnel responded and pronounced Betbeder deceased at the scene.

A 52-year-old woman died the morning of Oct. 19, after being struck crossing Lorton Station Boulevard.

In August, Albert Sweat, 62, of Maryland, was walking through the parking lot in the 6200 block of Arlington Boulevard when he was struck by the driver of a Volkswagen. The vehicle continued over a median and struck an occupied parked 2010 GMC Yukon before coming to rest in a mulch bed. Sweat was taken to a nearby hospital where he was pronounced deceased.

This past April, the 2022 Street Smart Campaign was launched because of the increase in fatalities over the number in 2021, 16 this year so far compared to 10 at this point in 2021. The campaign, launched by the Metropolitan Washington Council of Governments, calls for a behavior change for both drivers and pedestrians. Under this program, drivers should drive the speed limit and stop for people in crosswalks, and pedestrians were directed to use the crosswalk and wait for the walk signal.

Michael J. Farrell, Senior Transportation Planner at the Metropolitan Washington Council of Governments recommends that people use the crosswalks but it is generally legal to cross at the intersection even if no crosswalk is marked. It’s also legal to cross between intersections except when both ends of the block are signalized, he said, but the pedestrian is obliged to yield to the motorist when crossing mid-block, Farrell added.

Advocates for pedestrians and bicyclists argue that drivers, driving thousands of pounds vehicles, have a greater duty to watch out for vulnerable road users. Advocates also cite transportation design that focuses on vehicles for failing to prevent crashes that injure pedestrians.

Street Smart has a list of legalities surrounding intersections too. According to a Street Smart document pertaining to pedestrian laws in Virginia, "pedestrians shall cross, wherever possible, only at intersections or marked crosswalks." For bicyclists, they are required to use arm signals when turning. "Bicyclists may also dismount and walk in the crosswalks of the two intersecting roads," it said.

VDOT has a Policy for Integrating Bicycle and Pedestrian Accommodations, and this pertains to all highway construction projects with the presumption that the projects shall accommodate bicycling and walking. For every crash resulting in a fatality, VDOT conducts an engineering safety review after the police investigation is complete, VDOT said.