Shooting in Mount Vernon Leaves One Dead, One in Custody
Votes

Shooting in Mount Vernon Leaves One Dead, One in Custody

One man was killed and an arrest was made in a shooting in the Mount Vernon Square apartments on Tuesday, Aug. 30, the Fairfax County Police said. 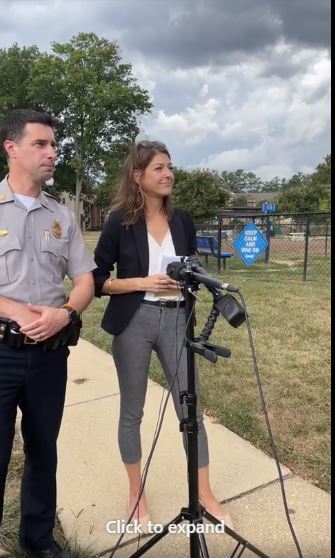 FCPD spokesperson Katherine Hayek, and Major Eli Cory at a press conference on the scene in Mount Vernon following the shooting.

According to the police, shots were fired around 2 p.m. prompting the police to swarm the 7400 block of Vernon Square Drive in, where they “encountered a man with multiple gunshot wounds to the upper body,” said FCPD spokesperson Katherine Hayek on the scene following the shooting. “He died on the way to the hospital,” Hayek added, at the press conference with Major Eli Cory.

Another resident was on the scene, and he helped with the police efforts resulting in an arrest, so they referred to him as a “good Samaritan.” The two handguns recovered were described as semi-automatic handguns.

About the time the officers arrived following the shooting, a school bus pulled up to drop off students, but the officers intervened to ensure the safety of the students and driver.

Following the shooting, the crime scene is being investigated, Hayek said.