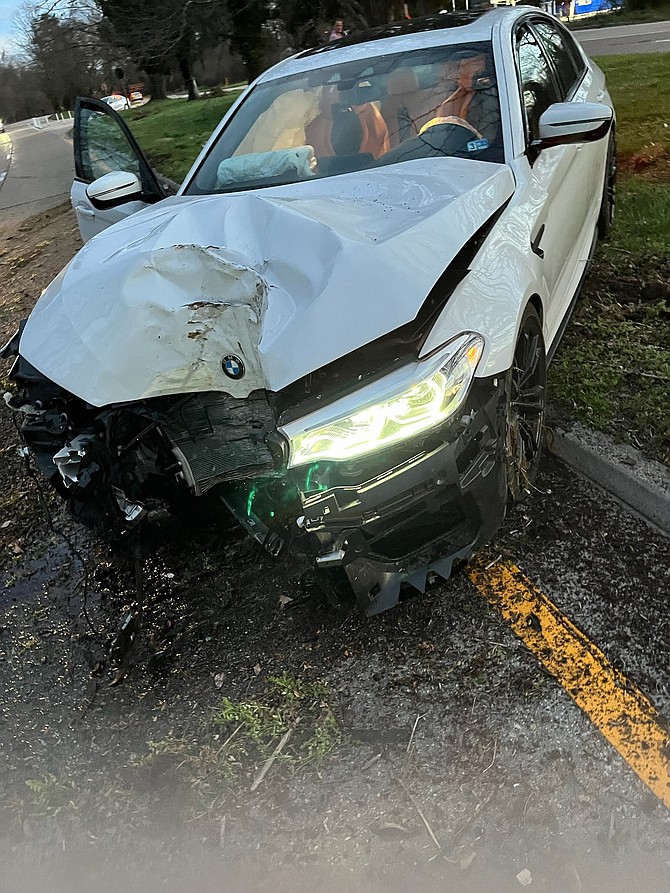 A crash at the parkway intersection

When Landon Holden was turning left off Belle Haven Road to the GW Parkway, many things went wrong. There was a crash that fractured her sternum and turned her world upside down. “It was awful,” she said. “We spun around and into a tree.”

There were other lasting effects of that crash. Others shared similar horror stories of that intersection at the meeting in Belle View Elementary School on Thursday, Sept. 15. It’s a road, and a way to get to Old Town, or to other points north, but this intersection is one of nine along the parkway that are avoided because of the dangers. “There’s no margin of error, I don’t go that way anymore,” Holden said.

In the cafeteria, the room was full of residents, elected officials, National Park Service officials and traffic engineers all looking for a solution. Everyone agreed that speed is a big factor, and limited sightlines, but no one solution presented itself. It would take a few things, and a test period to see if anything worked. This has been tried before with limited successes.

Speakers at the meeting had lots of suggestions

In 2020, the National Park Service released a study called the “George Washington Memorial Parkway: Traffic and Safety Context Sensitive Solutions Assessment.” It concluded that speed is a big problem. The speed data collected indicated that the median speed is above the posted speed limits, with the 85th percentile speed ranging from 8-12 mph above the posted speed limits.

It's up to the Park Service to enforce the speed limits, and this was something GWMP Superintendent Charles Cuvelier, acknowledged. But putting a traffic light in the middle of the parkway is not going to happen, or a pedestrian bridge.

“A bridge is not in the works, and a traffic light is not in line with the parkway design,” said Cuvelier. “We understand the need to slow traffic down,” he added.

There were lots of ideas floating around, and experiences at these two intersections that are problematic. Lots of crashes, near misses and bushes in the way of seeing what’s coming. “I know a couple of people who died there,” said Ellen Young, one of about 20 speakers at the meeting. “Failure to yield the right of way,” was the official reason that went on record.

Many compared it to the 1980s computer game called “Frogger,” where there’s an island in the middle and crossing is a matter of racing to the island on the first try and then to the other side.

In the last year, there were changes implemented on the parkway that included a turn lane, and constricting lanes which may have reduced the speed in some parts. But this effort was called “a swing and a miss,” by Jim Covaleski.

Noah Simon from Rep. Don Beyer’s office admitted that it’s not going to be a quick fix. “We’re trying to make the parkway as safe as possible, this is not easy,” he said.

But cutting the bushes back and trimming trees is a start, and Cuvelier said it would be a main concern of his office. “We’ll put in work orders for that, we’re in Virginia and things grow fast,” he said.