‘This Soil Cries Out’
Votes

‘This Soil Cries Out’ 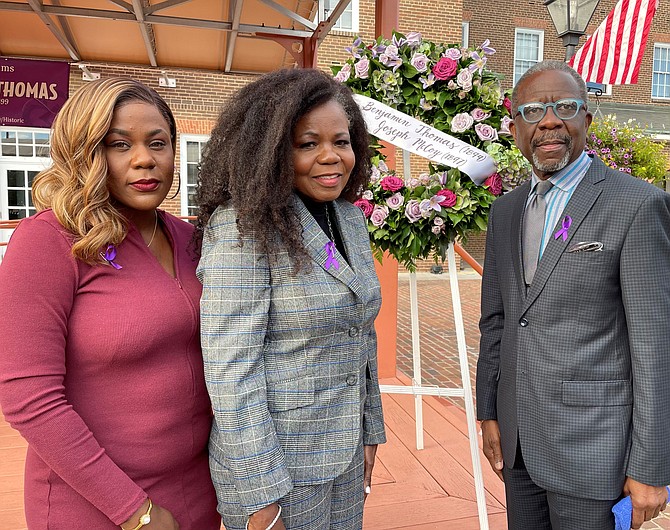 A somber crowd gathered in Market Square to remember the lives of Thomas McCoy and Benjamin Thomas, Alexandria’s two known lynching victims, as part of a soil collection ceremony Sept. 24.

The Alexandria Community Remembrance Project organized the event to honor and acknowledge the deaths of McCoy and Thomas, both teenagers at the time of their deaths.

Soil previously excavated from sites across the city connected to the lives of both victims was placed in wooden vessels designed and built by eighth grade students at Jefferson-Houston IB School. Led by descendants of Joseph McCoy, soil was drawn from each vessel and placed into glass jars which will be delivered to the Equal Justice Initiative in Montgomery, Ala.

“This soil cries out and demands a response,” said the Rev. James G. Daniely, pastor at Roberts Memorial United Methodist Church. “What will your response be? Will it be another monument that’s tagged on a wall somewhere or will you be moved to fight for justice?”

McCoy was a 19-year-old African American who was taken from a cell at the police station by a mob of white men. He was lynched at the southeast corner of Cameron and Lee Streets on April 23, 1897.

Two years later, on Aug. 8, 1899, Thomas, a 16-year-old African American, was pulled from the city’s jail and dragged more than half-a-mile by a white lynch mob. He was hanged and shot at the corner of King and Fairfax Streets, opposite Market Square.

These two lynchings are among the 4,743 that occurred in the United States between 1882 and 1968, as documented by Equal Justice Initiative. The EJI has called upon communities to remember victims of racial terror by researching their stories, collecting soil representing their lives and deaths, and taking a pilgrimage to the National Memorial for Peace and Justice.

More than 160 residents will participate in the Alexandria Community Remembrance Project pilgrimage Oct. 6-10 to deliver the soil jars to the National Memorial for Peace and Justice.

Working with the Equal Justice Initiative Remembrance Project, ACRP will receive a steel pillar that memorializes McCoy and Thomas. The pillar will be transported to a permanent space of remembrance in Alexandria at a future date to be determined.

Participating in the ceremony were Alexandria City High School students Irvin Naeem Scott and Nathan Desta, who recited as monologues the stories of McCoy and Thomas. City of Alexandria Poet Laureate Zeina Azzam recited her original “The Earth Speaks” followed by an interfaith reading of Lift Every Voice and Sing as cellist Vivian Podgainy provided an instrumental interlude.

Soil for Thomas was collected from his boyhood home as well as the site of his lynching. McCoy’s jar was filled with soil from his boyhood home on South Alfred Street and the church where his funeral was held. Both jars held soil from significant sites in the city’s African American history including the Queen Street Library where African American lawyer and community leader Samuel Tucker led a sit-in in 1937.

Three descendants of McCoy attended the ceremony, including Springfield resident the Rev. Robert Lewis Taylor. Taylor and his cousins Michelle Hill and Debra White of Atlanta received a proclamation and formal apology on behalf of the city from Mayor Justin Wilson.

“Today’s ceremony gives us a chance to begin reconciliation,” said Taylor, who learned of his ancestry from Alexandria researchers earlier this year. “It won’t be closure but it is a start for reconciliation.”