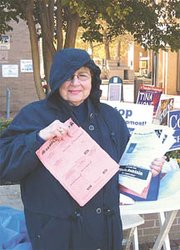 Mary Buff, passing out literature in front of the Lake Anne Community Center polling place stood in the rain and cold for six hours before taking a break.

Reston resident Mary Buff stood outside the Lake Anne Community Center on Tuesday morning, Nov. 6, shivering from the cold. At 9:20 a.m. she had already been there for four hours and passed election literature through early morning rain that made cool temperatures feel cooler.

"I really believe in the Democratic process," said Buff. "Reston is extremely liberal and I’m a Republican, and we get along," she said.

Just a few feet away from her, Bill Berkson was passing out Democratic Party literature. He had been there since 8 a.m., missing the rain, but feeling the freeze. "It is extremely cold," he said.

At 9:35 a.m. the Lake Anne Community Center polling place had seen almost 200 voters cast a ballot. There are about 1,500 voters in the precinct. Linda Andersen-Butler, the chief election officer, said the voter turnout was steady through the first three hours of voting. An election officer since 1993, Andersen-Butler said the Reston #3 precinct, with the polling place at the community center, is home to a lot of people active in the community. "We will probably beat the county average," she said about the voter turnout.

There were no lines at the community center, said Andersen-Butler, but there were some problems with one of the machines serving the polling place. In a similar election in 2003, when residents voted for local and state representatives, the Lake Anne Community Center precinct attracted 746 voters, or 36.2 percent of the precinct’s voters.

On the other side of Reston, at Hunters Woods Community Center, over 500 people had voted by 11:15 a.m., according to chief election officer Alexander Turner. "We are doing fairly well," he said about the voter turnout at the precinct. In 2003 1,299 people voted in the precinct, 34.1 percent of the voters. Turner said the precinct was well on pace to have more than 20 percent of the precinct’s voters cast a ballot. "We are a little ahead of what we were expecting," said Turner.

The Hunters Woods Community Center polling place was set up with three tables instead of two, in order to check voter identification quicker. The setup is a test-run for next year’s presidential election, when many more voters are expected to vote. Turner said the voters waited at most three to four minutes to cast their ballot on Tuesday.

Voters who exited the poll at the Hunters Woods Community Center between 11:30 a.m. and noon were for the most part dissatisfied with the current state of local politics. Tom Dogherty, who supported Marie Huhtala for Hunter Mill District supervisor and Gary Baise for county chairman, said he wanted illegal immigration to be addressed at the local level. Also, he was concerned that people had no input in the governing process at times, for example in the South Reston Park and Ride development proposal.

"Anybody but Hudgins," said Pat Mullaney, a 31-year Reston resident. He said Cathy Hudgins, incumbent Hunter Mill District Supervisor, is a "big spender." He added that people in the area seem to have so much money that they do not have much concern on how it is spent. Ron Kotulak took a similar position. "Democrats are always looking to spend," said Kotulak. He too wanted to see illegal immigration tackled on the local level. "If you’re here legally, welcome to America," said Kotulak.

Some of the voters were upset that there were not too many choices on the ballot. "I was surprised there weren’t more Republicans running for things," said Mal O’Neill. "It is frustrating when you don’t have a choice," he said. O’Neill added that he had not followed the Democrats enough to determine whether "they’re doing good things."

Ted Smith agreed that the lack of challengers in some races was frustrating. "The idea where you have one candidate is undemocratic," he said.

While the voters supported different candidates, they were in agreement that voting is a right, a privilege and a duty. "It is a civic duty. I vote every time I get a chance to vote," said Susan Zaboji, who said she voted for conservative candidates.

"I always vote. It is a privilege that I have," said O’Neill.

Pam Holmes brought her great nephew Trey Montague to watch her vote. "I want him to see and feel how important it is" to vote, said Holmes. She voted "primarily Democratic."

"It is an honor to vote, and a duty and privilege," said Kotulak. Rosalind Gold, who has strong feelings on the School Board race in Hunter Mill District, said, "As a citizen, you’re supposed to vote."