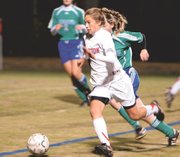 Wootton sophomore Allison Yeager led the Patriots in scoring this season, and she scored the game-winner in Wootton’s 2-1 overtime victory over Churchill in the regional playoff semifinals on Nov. 2.

Under the pressure of sudden-death overtime in a playoff game, Molly Berman and Allison Yeager did what they’d done all season for Wootton’s girls soccer team. With less than 30 seconds remaining in the first overtime period of Wootton’s regional playoff semifinal match against Churchill, Berman crossed a corner kick to Yeager, who deflected the ball in for the game-winning goal.

So much was familiar about the way Wootton eliminated visiting Churchill with a 2-1 sudden-death overtime victory on Friday, Nov. 2. The Patriots beat the Bulldogs by the same score when the teams met in the regular season on Sept. 18. Wootton’s game-winning goal was an example of the team’s season-long strength.

“Molly’s done that exact kick before,” said Yeager, a sophomore who led the Patriots in scoring this season (8 goals, 3 assists). Berman’s corner kick sailed across the goal to the left side, where it fell into a crowd of Wootton and Churchill players. Yeager wasn’t the tallest player in the cluster, but she was the one positioned just right.

“She seems to have an eye for where the ball is going,” said Wootton coach Chris Thompson.

Churchill coach Haroot Hakopian had no complaints about the way his team played. The Bulldogs, once mired in a 2-6 season, surged late and finished 8-7. Their effort against Wootton reflected the way they’d played late in the regular season, and in playoff victories over Blake and Gaithersburg.

“Everybody was doing what they were supposed to do,” Hakopian said. “We played hard. We had every chance to win tonight. … Unfortunately [on the overtime corner kick] we lost track of Allison, and that was it.”

FOR THE SECOND straight season, Wootton advanced to the regional championship against Quince Orchard. Prior to last year, the Patriots had been seeded three out of four seasons, only to lose their first playoff game each year. Now that they have reached the regional finals for two straight years it is both relieving and thrilling for Thompson and the Patriot players to forge a playoff run worthy of the Patriots’ regular season dominance.

“This is where I think we should have been every year,” Thompson said. “Last year helped us for this year. It gave us a little more confidence to get to this game.”

Wootton has 11 seniors, and the experienced team went 9-2 in the regular season. With the exception of the Patriots’ 2-1 regular-season loss to Quince Orchard on Oct. 18, Thompson feels the players have shown maximum effort in every game this season, and they have continued to do so in the playoffs.

“[Churchill] scored first, but we kept plugging away,” Thompson said. He was especially pleased with the play from Wootton’s defense, Schuyler Cosby, Suzanne Falk, Julie Klatzkin and Molly Berman.

“Our forwards really created havoc tonight,” said Thompson, who felt the team had five or six good scoring opportunities. Were it not for the play of Churchill goalie Jess Feinberg, Thompson estimated the Patriots would have scored at least three or four goals.

ON BOTH sidelines, they had high praise for Feinberg’s play as Churchill’s goalie. Through a second half in which Wootton dominated possession, Feinberg stopped a few dangerous shots and plucked the ball out of a threatening crowd several times. “She saved the best for last,” Hakopian said.

The same was true of the Bulldogs’ collective play this year. After finishing the regular season on a winning streak, the Bulldogs bounced a seeded Blake squad in the first round of the playoffs, then beat Gaithersburg 5-1 in the quarterfinals.

Sophomore Pam Vranis established herself as the Bulldogs’ most skilled and best player, Hakopian said. On defense, Rachel Marincola’s freshman season was a huge asset to the squad, Hakopian said. “There’s no question that she was one of the best defenders we had.”

THE PATRIOTS were scheduled to play Quince Orchard for the regional title on Tuesday, Nov. 6, after The Almanac’s press deadline. See www.mpssaa.org for brackets and updated results.