From the River to the Rails
Votes

From the River to the Rails 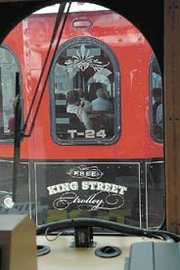 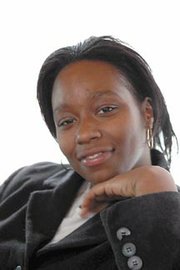 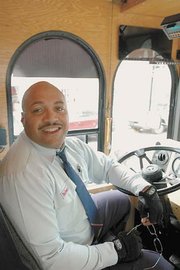 Like many people who arrive at the King Street Metro station, Janea Carr was unfamiliar with Old Town when she arrived one warm spring afternoon last week. She asked a Metro attendant how to get to the waterfront and was directed to the new King Street Trolley — a free ride on a nostalgic-looking bus disguised to look like the kind of steel-wheel trolleys that once dominated streets of Old Town. She walked out of the Metro station and bounded up the steps to the trolley.

"Do you go down King Street?" she inquired

"No," responded irascible trolley driver Darryl Hodges. "But the trolley does."

"How often do you go up and down King Street?"

"When I press the accelerator."

ALL THE WAY from the Metro station to the waterfront, Hodges kept the momentum even while stopping at the designated spots every other block. Along the way, Hodges opined on King Street ("off the chain"), Alexandrians ("best people in the world ") and the response riders have to learning about the free service ("they absolutely love it"). His energy and enthusiasm were contagious, and people seem to enjoy their time on the trolley as King Street whizzed along in the background. By the time Carr arrived at the waterfront, she had a new appreciation for Alexandria.

"Sometimes you get on a bus and the driver is in a bad mood because he’s had a bad day or whatever," she said, stepping onto the sidewalk. "But this is nice — and free."

City officials estimate that the King Street Trolley will cost about $1 million a year to operate, running four buses from the river to the rails from 10 a.m. to 10 p.m. seven days a week. Riders can stand at any of the 18 designated stops and wait no more than 15 minutes for the next trolley to arrive. The free service replaces the old "DASH About" buses, which concluded their limited weekend service on Sunday. The rubber-tired trolleys sport a crimson-and-black color scheme, wood-paneled interiors and clean-burning diesel fuel.

"The distinctive design, which does not look like a typical city bus, serves as a visual cue to potential riders that this transit service is different," wrote City Manager Jim Hartmann in his original recommendation for the expenditure last September. "The drivers of the trolley would also be trained in the city’s history and provide an audio presentation about the city as the trolley progresses up and down King Street."

THE TROLLEY SERVICE was created as part of a series of improvements to Old Town in response to this month’s launch of National Harbor, the 300-acre site across the Potomac River just south of the Woodrow Wilson Bridge. For more than a year, city leaders have been trying to devise plans to cope with the potential competition from the one million square feet of convention center, retail space and condominiums. The trolley service was one part of a $1.3 million package of improvements that also includes water taxi service to National Harbor and a $118,865 marketing plan featuring brochures, videos, advertising and expanding hours for the city’s visitor’s center, which will be open an additional three hours closing at 8 p.m. instead of its current 5 p.m. closing time.

"Whether or not National Harbor impacts the city will depend in part upon how the city of Alexandria prepares for what will certainly become a monumental shift in the tourism dynamic of this region," said Hartmann. "As a result of this new opportunity to gain tourism business, as well as given the risk of losing existing business, it became clear that the city needed to undertake some activities to get ready for National Harbor’s potential impacts."

Improvements to the marina include four informational kiosks ($62,699), 30 new planters with four seasons of plantings ($52,380), a shelter for water-taxi riders ($30,000), banners ($17,250), benches ($17,240), improvements to the food court bathrooms ($16,866), an awning for the food-court entrance ($11,520) and several new bollards ($7,200). Appropriations to improve the waterfront include $484,094 to pay for additional lighting in dark corners around the marina, including the stairway in front of the Chart House, the pier adjacent to the Cherry Blossom, tree lights along King Street and a giant "wash light" to illuminate the Torpedo Factory.

BACK IN JANUARY, city officials granted a contract to the Martz Group — a Pennsylvania-based company that operates Gray Line sightseeing buses. The diesel-fueled, rubber-tire models have a distinctive crimson-and-black "King Street Trolley" logo and an old-fashioned bell for riders to let the driver know they want to get off. The city launched a limited experimental service last Tuesday, with city officials taking careful notes to fine-tune operations in advance of the formal launch this week.

"At this point, we are in the process of analyzing if we need more stops or fewer stops," said Pierre Holloman, an urban planner with the Department of Transportation and Environmental Services. "I tried to arrange the stops so that the trolleys would not block any of the turn lanes."