Cougars improve to 6-0 with win over Lake Braddock. 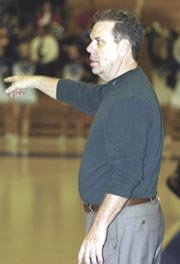 Oakton coach Fred Priester and the Cougars will be hosting the eight-team Casel’s Holiday Tournament Dec. 26, 27 and 29.

One of Oakton’s greatest strengths early on in the high-school girls basketball season has been its ability to put the ball in the basket with great frequency. The unbeaten Cougars (6-0), through their first six games, have averaged 75 points per contest thus far.

Oakton is coming off a 2007-08 season in which it finished 22-3 overall while winning its fourth consecutive Concorde District title. But the Cougars’ season ended on a down note when they were beaten by Annandale in a first-round game of the 16-team Northern Region tournament. Oakton, a perennial powerhouse over the years under Priester, has won 11 district titles over the past 13 years. Its last region crown came in 2005.

Priester said this year’s Cougars are playing at a faster pace than last year’s squad. Oakton, like last year, is not an overwhelmingly big team physically.

"We’re playing a different style of play this season than last year, a more up-style tempo," said the coach. "We’re getting solid contributions from everyone. We’re still not very big, but we’re a lot faster."

Johnson, who is 5 foot 9 inches, is a frontcourt player capable of mixing it up inside with opposing centers. She has a knack of scoring key baskets in big games and is quite an athletic player.

"She can play post [position] and she has guard-like skills," Priester said. "She takes the ball to the basket pretty well."

In November, Johnson signed a letter of intent to play the sport collegiately at Division 2 University of Indiana in Pennsylvania.

"She’s a do-everything player," Priester said. "I thought she was the best on our team last year. She can shoot the three and has solid post-up skills. She’s very intelligent and knows every position on the floor."

Stephenson, also a First Round All-District selection last year, gives Oakton a terrific outside shooter. A year ago as a ninth-grader, the sharpshooter nailed 58 three-pointers. This season, she has 12 treys through the first six games. But Stephenson’s scoring production is not limited to long-range bombs.

"She has added a mid-range game," Priester said of Stephenson’s improved game this winter. "She can score on drives and pull-ups."

Another key player is Borojeni, the co-captain and shooting guard who possesses speed, an outside shooting touch and excellent defensive skills.

&lt;b&gt;THE COUGARS&lt;/b&gt; have a new look with ninth-grade siblings Caroline and Katherine Coyer in the backcourt.

"Caroline can be a prolific scorer and she has had some prolific games," Priester, who also loves the perimeter players’ ability to pass the ball, said.

"She has versatility in her game to put us in the best position to win," Priester said. "She’s a real good defender."

Katherine Coyer has been serving as Oakton’s first player off the bench.

"She’s a lockdown defender and can score, too," Priester said.

In this week’s action, Oakton was scheduled to play at Westfield Tuesday and will be home against Robinson this Friday night. Both are district contests.