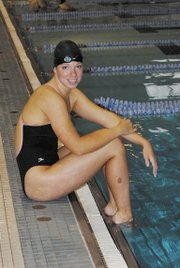 Great Falls resident and swimming sensation Kate Ziegler earned a spot on the 2008 U.S. Olympics Team with a second place finish in the 400-meter freestyle event at the Olympic Trials in Omaha Monday night.

Ziegler, a Bishop O’Connell High graduate, finished behind Towson’s Katie Hoff, who was favored to win the 400-free race. Hoff, by claiming first, guaranteed her spot at the upcoming Olympics in Beijing, China.

Ziegler’s best event is the 800-free. The finals for that race at this week’s Trials are set for Saturday. Prior to that on Tuesday, Ziegler was set to also compete in the 200-free, another event Hoff is expected to win.

Ziegler excels in long distance swimming where she holds world records in both the 1500-meters freestyle long and short courses, as well as the 800-meters short course. She holds the U.S. record in the 1650 yards free. Ziegler’s best shot at an Olympics gold will be in the 800.

Four years ago as a 15-year old, Ziegler made a strong showing at the Olympic Trials, although she did not qualify for that year’s 2004 Olympic Games.