The cast of 'Poultrygeist: Night of the Chicken Dead,' prepare for a scene. The movie centers around zombies seeking revenge for having a fast food chicken restaurant built on top of their graves. 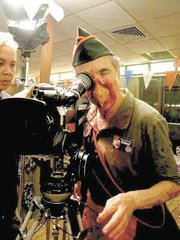 Lloyd Kaufman gets into character while directing his zombie horror film, 'Poultrygeist: Night of the Chicken Dead.'

Audience members will be viewing the premiere of “Poultrygeist: Night of the Chicken Dead,” a new horror film directed by the president of Troma Films, Lloyd Kaufman. Following the screening at the Cinema Arts Theatre, the film will continue to play at the University Mall Theatres on 10659 Braddock Road in Fairfax.

“We chose to show the movie at University Mall because it is one of the only independent theatres in the D.C. area.” said Curtis Prather, director of the Spooky Movie Film Festival.

“Poultrygeist,” a horror movie spoof, is far different than the typical zombie films of the past few decades. “The movie features a satire of the horror genre, and a parody of zombie movies in general,” said Prather. “The basic plot involves a fast food chicken restaurant that’s been built on top of an ancient Indian burial ground. Safe to say the dead aren’t pleased to have them there.”

The film strives to remain distant from the traditional zombie films that have now become mundane and predictable. “There’s a definite fatigue in the typical Hollywood horror blockbuster. We want to do something unique,” said Prather.

THE SPOOKY MOVIE Film Festival gives “Poultrygeist” a chance to expand its limited theatrical release. “Originally, the film was planned to be released solely in New York and Los Angeles, but we really wanted to do a D.C showing. It all sort of came together organically,” said Prather.

The film has gained notoriety for its famous director accompanied with increasing excitement from horror movie fans and University Mall regulars alike. “It’s the Washington, D.C. premiere of the film, and will be playing guaranteed for one week, maybe longer,” said Mark O’Meara, owner of the Cinema Arts and University Mall Theatres. “We’re hoping people check it out. It should be completely over the top but really fun.”

Also appearing at the festival will be the presentation of four award winning short films, including “The Ancient Rite of Corey McGillis,” “Seekers,” “Eight Thirty-Two” and “The Marionette.” The four films shown at the festival will be included as part of the first volume of the “Festival of Horrors” anthology DVD series, produced by The Spooky Movie Film Festival and Rudderpost Films. “Each DVD has two shorts and some stills, including an exclusive interview with Steve Niles, who wrote the comic ’30 Days of Night’ which was made into a movie last year. Volume 2 of the series will be available by the main October festival; volume 3 is set to come out next year,” said Prather.

The festival and the anthology series will be hosted by horror movie legend Count Gore De Vol. “We decided to have a special summer event not only to premiere ‘Poultrygeist,’ but to commemorate two anniversaries — Count Gore De Vol’s 10 year online career, as his the 35 anniversary of his television career,” said Prather.

Horror movie fans that attended previous years’ film festivals also spoke up, asking for additional festivals. “We received quite a bit of positive feedback from last year,” said Prather. “Many people wanted the events to occur year round, rather than just in October.”

The festival will include appearances by the cast of the Telly Award winning “Monster Madhouse Live,” including “Karlos Borloff” who was recently featured on “The Tonight Show with Jay Leno.”

Additionally, festivalgoers will be treated to a sneak peak at The 2008 Spooky Movie Film Festival, which will take place on October 16-19. The festival will include a question and answer session with filmmakers, along with the premiere of one feature and several short films.

Each year, up and coming filmmakers scramble to submit their films in hope of being chosen for a spot in the festival. “Well over 100 submissions from filmmakers have already been received. We will continue taking submissions through August. We feel fairly comfortable in the decision process, as in both 2006 and 2007, the chosen films went on to be picked up by Lionsgate Films,” said Prather. “Its a lot of fun for the people who attend.”

ON FRIDAY, July 18, Kaufman, the director of “Poultrygeist,” will conduct a crash course of his filmmaking master class at the University Mall Theaters.

“Students will learn basic filmmaking skills, including how to get started, how to get financed and the way to choose a production group, said Dick Dyszel, spokesperson for the Spooky Movie Film Festival. “He will also be talking about his movie, which has received great reviews. He will also be giving students tips on filmmaking straight from the source.”

The author of several books, Kaufman has taught this seminar at such institutions as his alma matter Yale University and the University of Southern California. Students who attend this two-hour class will have the opportunity view “Poultrygeist: Night of the Chicken Dead” as well.

“He has written several books on filmmaking and is quite respected in the underground film network,” said Prather. The class will take place from 5-7 p.m. Registration is $20.00. “Those who show up will learn a lot, and will definitely have a good time,” said Dyszel.