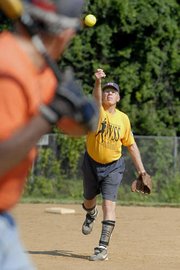 Tom Garofalo high-fives Jim Ridgell after Ridgell made a nice catch to end the inning. 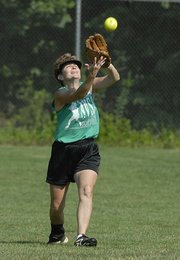 Benita Stanley makes the last out of the third inning during the Northern Virginia Senior Softball All-Star game in Vienna held on July 16.

Ben Fisher remembers playing Little League baseball against Gary Parks in Arlington over a half century. After the days of Little League, they did not see each other until they met up on the diamond again — 50 years later.

Fisher and Parks, both 65, are All-Stars of the National League of Northern Virginia Senior Softball (NVSS) along with several others. Teammates and managers elect the best players from their respective team and those players compete for either the Washington or Wilson Division.

NVSS offers a unique opportunity for seniors — who are at least 50-years-old — to continue play the game that they grew up loving.

“Whatever level of play you are and as long as you are in some kind of shape, we’ll have a team for you to play on,” said NVSS Publicity Chairman Dave Scheele. “It’s great for your health and it’s just a great opportunity to have fun.”

The league has three sub-leagues: Continental, American, and National. The Continental is the equivalent of AA ball, American is AAA, and the National League is the premier division. League managers evaluate players at the beginning of the season to determine which league fits their respected abilities.

Do not let the gray hair fool you; these boys play with as much heart and strength as Major League All-Stars of today. Many of them have the ability to crank the ball over 300 feet out of the park — ask any of the players about Bill Grewe.

“Those are automatic for him,” said outfielder Bob Williams. “He can hit homers at will.”

Both dugouts lock focus on his smooth swing each at bat waiting for another ball to go the yard. Last year, Grewe set the NVSS record, clobbering 58 homeruns in a single season.

While other sports like tennis and golf provide great recreational and healthy activity, softball offers something more, according to outfielder Peter Shockley.

“The thing about softball is it’s a team sport and you have that atmosphere,” Shockley said. “You can make a lot of friends out here.”

Shockley sat the all-star game, nursing a back injury. He said he is saving his back for the games that really matter in the coming week. His team currently sits in a tie for first in the division.

&lt;b&gt;DEFENSE WAS PIVOTAL&lt;/b&gt; in the first two innings for both teams. The Wilson division All-Stars scored the first run of the game in the third inning.

Powerful hitting continued in the fourth and fifth inning for the Wilson team, racing to a 7-1 lead heading into the bottom of the sixth.

One memorable highlight came when second baseman, ‘Crazy’ Jerry Sviatko laid out for a diving grab in the infield. Sviatko threw the ball to the shortstop covering the base for the inning-ending out while still on the ground. Teammates and opponents both applauded the play by the retired schoolteacher and Sviatko walked back into the dugout with a small grin on his face.

“Come on guys,” one player shouted. “Let’s do this one bat at a time.”

A controversial out at first caused the Washington dugout to jeer at the first base umpire.

“Come on Blue,” shouted one player. “Yeah, we need all the help we can get right now,” echoed another.

Power hitter Tom Wells pelted a ball into centerfield. The outfielder quickly threw back to first, causing the first baseman to leap for a catch. When the first baseman came down, Wells collided with him. The collision forced the Washington manager to pull the injured Wells out of the game.

With two outs, the Washington Division All-Stars strung together a slew of hits and pulled in a run, but it was not enough to overcome the 9-3 deficit. The game ended with a grounder thrown to first.

&lt;b&gt;AFTER THE GAME&lt;/b&gt;, both teams met at centerfield for a line of handshakes. The game proved that you are never too old to enjoy America’s favorite pastime. Each player comes from a different background, yet the 500-plus members of NVSS each join for the same love for the game.

First baseman Jerry Sheetz said he feels privileged to play with some of the greatest guys he has ever met.

“It’s amazing when you look around and see that this guy had bypass surgery, or this guy has cancer. It kind of makes it hard to complain about a paper cut,” said Sheetz.

A picnic followed the game and as players headed over for it, all they talked about were certain plays during the game and what they would have done differently. It was quite evident these grown boys truly love baseball.

“It doesn’t matter who you are,” said Scheele. “As long as you love the game, come on out and play ball.”