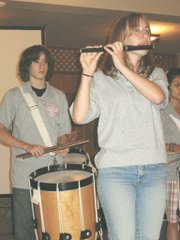 Katie Bidinger plays the fife at a practice for the Loudoun Border Gaurds Fife and Drum Corp.

The Loudoun Fife and Drum Corp prepares to begin playing a piece.

One of America’s oldest forms of folk music is still alive and kicking or, more accurately, marching. That music is fife and drum music and the Loudoun Border Guards Fife and Drum Corp are the ones keeping it going. The group, which is comprised of students from elementary school to college, can be found performing all around Loudoun County, marching in parades and at events and around the country performing in musters and jam sessions. They will be playing at both Leesburg's and Waterford’s Fourth of July celebrations this year, too.

"The concept goes back to pre-Revolutionary War times," said Anne Quinn, one of the directors of the Fife and Drum Corp along with her husband, Cormack. "We just play music, perform and hang out; it’s like a big family. You get to meet all these other people at the musters. It is really a universal music."

THE CORP currently has 10 active members and nine senior members who come back and perform with the group when they can. Many of the members have been with the corp for years learning how to play music and becoming fife and drum instructors to the younger participants. The corp was founded in 1996 as a 501c3 nonprofit organization and is funded by donations and local grants. It performs all types of music from traditional marching tunes to pieces based on music from "Pirates of the Caribbean."

"We had decided that the town needed a Fife and Drum Corp so we got in touch with the president of the Loudoun Museum at the time and that got the ball rolling," Quinn, who performed with a well-known Fife and Drum Corp in New York as a child, said.

Membership to the group is always open and at the moment they are eagerly looking for more fifers and drummers to participate along with more donations to help pay for the group's travel and instrument costs. Quinn said that new members need no musical experience just an interest and a will to practice and learn. Coming out and seeing the corp perform often attracts new members and the band encourages anyone who hears them and is interested in participating to come up and talk to them.

"I just heard a muster and I’d never seen one before so I checked it out," said Katie Bidinger, who has been with the corp for nine years playing the fife.

"The thing that I really like about it is that it’s a hobby, it’s not a chore," Quinn said. "We do it because we like it. We work hard but there are no requirements like with a school program."

MEMBERS OF THE Fife and Drum Corp not only cite this relaxed feeling as one of the reasons they enjoy the group, but also the tight-knit family feeling that the corp has. With many members playing for years and years, the corp members have created many close friends.

"I’ve been playing since I was 9 years old," said Evan Meyerricks, who is now in college, "and the friendship is the best part. A lot of it is about the friendship and camaraderie that develops between the musicians."

Many of the group’s musicians join because of friends or family in fact. Quinn said that a large group of members have been siblings or join because friends have recommended it. Belky Yanes’ drum teacher recommended the corp to her last year and she in turn invited her friend, Maggie Gutirrez. The two now both play drums for the group. Afterward both of their sisters joined and are now playing the fife.

"We get to meet a lot of people and you learn a lot of stuff and new songs," Yanes said. "Plus the traveling is always fun."

New members need absolutely no musical skill and in fact some of the group’s members found their love for music through it. They can choose between playing the drum or the fife, a small transverse flute, and are taught how to march and play each. In the beginning, most of the band members said that marching and playing is the hardest part but this gets easier as they practice.

"The marching ends up becoming second nature," Quinn said. "When you start out it’s hardest to play the drums because you have to learn how to carry it and get all the basics down but in the long run the fife is the more challenging instrument."

Most exciting for all the performers, and the directors, is getting to play live. Whether it is with other Fife and Drum groups from throughout the country or in the middle of a parade, the musicians said it is one of the most exciting parts of being in the group.

"It’s fun to be in the parades," said Kate Boyle, a bass drummer with the group for the past eight years, "because people get really excited when they hear the music. Everyone is cheering and you just get really excited."

THE TWO DIRECTORS allow the students to be creative and arrange their own music once they become well versed enough. Boyle got into music through the corp and started to arrange and write her own music. She is now going to Towson University where she will major in music.

"We try to encourage them all to be creative," Quinn said. "Sometimes their ideas are a bit off the wall but we want that, we want them to come up with great ideas."

The Quinns want the Fife and Drum Corp to be a place where children can learn not just about music but about responsibility and hard work. They stress the importance of practice and put heavy emphasis on the musicians being responsible for themselves. The corp has a $2 weekly due that the children must pay and they try to encourage parents to have their children use their own money for this to encourage responsibility.

"Part of our program is that everything [the children] do from the time they join has a life value from it," Quinn said.

Teamwork and cooperation are also stressed in the program as working together is essential for the performance to go right. If a drummer or fifer is off their cue the whole group can fall apart. A missed beat can throw off an entire line.

"It’s challenging to get everyone working together," said Bidinger who is helping to teach fife to some of the younger players. "If one falters, we’re all going to fall down."

RIGHT NOW the group is looking for more funds as hosting a major national muster last year used up much of their resources. Gas prices have also greatly affected the group’s ability to travel to musters and participate in many of their usual programs. Donations and help are always welcome said Quinn. This hasn’t stopped the group from performing to their best though.

"When everybody gets it together nobody can touch this band. They’re probably the most talented group of kids I’ve ever worked with and had the pleasure of teaching," Quinn said.