Yorktown loses to Madison, 28-7, thanks to game-changing play. 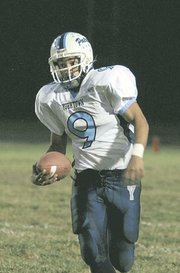 When it comes time for football playoffs, turnovers and big plays rule the day.

The Yorktown football team learned that lesson the hard way, committing a turnover that turned into a big play that proved to be the difference in a 28-7 first-round loss to Madison last Friday night.

And it all happened within a 15-second span.

With the Patriots and Warhawks tied at seven apiece late in the third quarter, Yorktown had a first down at Madison’s three-yard line when coach Bruce Hanson made the decision to try a play action pass to put his team on top.

The subsequent throw was intercepted by Taylor Mead in the end zone and returned more than 100 yards for a Madison score, a momentum changer Yorktown (6-5 overall, 4-2 National Disrict) never could recover from.

Once it took the lead, Madison leaned heavily on its rushing-based attack, amassing all 301 of its total yards on the ground. In the fourth quarter, the Warhawks’ Will Cybulski had a 80-yard touchdown run, while running back Sasha Vandalov capped off a 150-yard rushing night with a touchdown scamper of his own.

“It’s what you call your 14-point swing,” Hanson said looking back on the pick six that changed the game’s momentum. “It was probably an ill-advised call. I thought we’d fake them out.”

The reason for the fake was the play of Hanson’s star player, the multi-dimensional Kyle Toulouse, throughout the season. Towards the end of the year, teams had begun to pile the line of scrimmage with defenders in an effort to stop Toulouse.

In a not-so-fitting end to a spectacular season, Toulouse could only muster 67 yards rushing and was held without a touchdown against Madison. The poor statistical game didn’t mar the player many believe to be one of the most prolific in the northern region.

“I’ve had better at one position than him, but I’ve never been around a better athlete than Kyle,” said Hanson, who just completed his 24th season as head coach at Yorktown. Toulouse, lined up as a quarterback, running back, wide receiver, safety, cornerback, punt returner, kick returner, kicker, and punter over the course of the season. “Sometimes you think you just don’t have enough Kyles out there.”

For his efforts, Toulouse, a senior this season, was named National District Player of the Year by coaches even though Yorktown finished third in the district. He finished the season with 1,370 yards rushing, 578 yards passing, and 18 total touchdowns.

In addition to losing Toulouse for next year, the Patriots will also be without the services of talented wide receiver Mike Veith, running back Jared Smith, and linebacker Kenny Bailey.

But Hanson takes solace in the fact that next season’s Yorktown squad will return about 15 veterans — more than usual according to the coach — that contributed heavily to this the first-round playoff exit this time around.