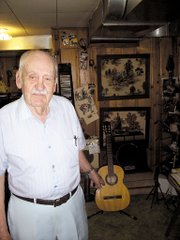 Legendary country fiddler Speedy Tolliver shows off the music room in the Arlington house where he has lived for 48 years.

&lt;b&gt;SPEEDY TOLLIVER&lt;/b&gt; is arguably one of Arlington’s most accomplished musicians. Tolliver has been playing the fiddle, banjo and guitar for more than 70 years. He was a founding member of the Lee Highway Boys, a country group based out of Arlington in the 40s and 50s, and he has played country music at the Kennedy Center and the White House. Earlier this year, Tolliver celebrated his 90th birthday and later this month Tolliver’s career in music will be celebrated at the Speedy Tolliver Fiddle & Banjo Fest. The Arlington Connection interviewed Tolliver and his wife Gala in their Bluemont Neighborhood home about Speedy’s career in music and how he got started playing the fiddle.

&lt;p&gt;I played the banjo to begin with. I learned from my brother. He was a banjo player and he played harmonica. I played the banjo for many, many years until I came up here and we had a band here in Virginia. The fiddle player, he couldn’t stay with the band. Back then fiddlers were very scarce. I decided that maybe I could play the fiddle so I took it up and I’ve been a fiddler ever since. Now I’m a Virginia legend.

&lt;p&gt;I moved to Fairfax in 1939. I stayed there for about five years and then I moved into the District area.

&lt;p&gt;During the depression, back before your days, jobs were very scarce. Few people had jobs. It was very hard to find a job. That’s why I was playing music more than anything else. It was all I could find to do.

&lt;p&gt;Speedy Tolliver: Well you could find something to eat. You’d go from one place to another. People would invite you in.

&lt;p&gt;Gala Tolliver: Your friend asked you to come over here, John Stringer. He has a friend and as a musician he asked him to come up here.

&lt;p&gt;Gala Tolliver: That was in the 40s, the late 40s. Because in the 50s you started playing for square dances. And you played every Thursday at Glen Echo for square dances with Sammy Farrow.

&lt;p&gt;Gala Tolliver: He plays by ear.

&lt;p&gt;You learn that by listening to radio and playing records. Initially I learned it from old 78 records. It had a machine where you could run the sound up and down and you could tune in with it. That’s how I played to begin with. I learned my melody and the timing from a record player. Of course, playing with other people is the best way to learn.

&lt;p&gt;&lt;b&gt;When you first started playing music, did you think that this is something that you’d be doing for the rest of your life?&lt;/b&gt;

&lt;p&gt;No I had no idea how long I’d be doing this. I just did it mostly for fun and to meet people and to travel around from one place to another. You’re single and there’s nothing holding you back. At that time, I did get married and that’s where at one time I didn’t play anything at all for about 15 years.

&lt;p&gt;Speedy Tolliver: Yeah, I got married. Playing music for a living is not sustainable.

&lt;p&gt;Speedy Tolliver: Well I worked at a naval propeller plant in Indian Head, Md. We have four kids and eleven grandchildren. Is that right?

&lt;p&gt;Speedy Tolliver: She can correct me. When you get to 90, you lose something.

&lt;p&gt;&lt;b&gt;What made you decide to start playing music again after you stopped?&lt;/b&gt;

&lt;p&gt;Speedy Tolliver: I had a friend who lived in Arlington and played country music in Arlington. He knew I had played and country musicians weren’t too plentiful back then. He insisted that I come and start playing with him so I got started playing again.

&lt;p&gt;My friend who was already up here called me up and asked me to come up here at the time. From there we got two guitar players from Fairfax. One of them dropped out. There was another guy from Pennsylvania. We got together and called ourselves the Lee Highway Boys because we have this Lee Highway that goes all the way through Virginia.

&lt;p&gt;&lt;b&gt;What’s the music you used to listen to when you first started playing?&lt;/b&gt;

&lt;p&gt;County and western square dancing music. I can play bluegrass, country western or swing. I listened to all those artists from Nashville, Tenn. Bob Wills and the Texas Playboys is one of my favorites. I like their music and style and so forth. I had a natural instinct to pick up tunes. Anytime I can hear a melody once or twice I can duplicate it.

&lt;p&gt;&lt;b&gt;Is the Washington area a good place for county music?&lt;/b&gt;

&lt;p&gt;It sure is. I think it’s about as good as Nashville. There are so many musicians in this area. But many years ago there weren’t very many musicians here. When we had the Lee Highway Boys there were only two other bands that I knew of in the whole area that played country music. Now there are all kinds of banjo pickers and fiddlers and everything else.

&lt;p&gt;I wouldn’t want to judge them, I’ve played with so many good ones. I used to play with a guy called Sandy Hoffman out of Maryland. I’m a good backup musician. I can back up most any music that comes along.

&lt;p&gt;&lt;b&gt;What would you say is your best moment playing music?&lt;/b&gt;

&lt;p&gt;I guess it would be playing the Kennedy Center and playing the folk music festival around town. I played the White House for Jimmy Carter. It was a square dance thing.

&lt;p&gt;They like to have different artists come in. They had a big square dance on the south lawn of the White House. Carter and his wife joined in.

&lt;p&gt;&lt;b&gt;What advice would you give to someone who was just beginning to play music?&lt;/b&gt;

&lt;p&gt;I think it’s a great healthy thing to be able to play music. If you have talent then you can develop your talent. Another great advantage is that you meet so many different people. We’ve met hundreds of people that we love and they turned out to be very good friends. And I only met them through music. If anyone can play music they should play music and keep it up. And I think it’s healthy. It’s a good therapy. In fact, I think that’s why I’m still around at 90 because of this fiddle.

&lt;p&gt;Gala Tolliver: Tell him the truth. It was because he’s so slow, that’s why they call him Speedy. The only thing he’s fast on is the fiddle. Everything is very slow. You’ve heard of the seven-year itch? That’s him. His friend named him in high school and it stuck with him.