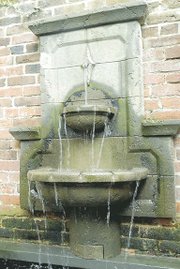 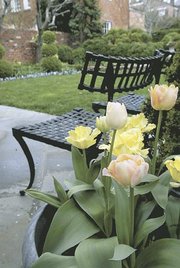 One of the most infamous ghosts in Old Town Alexandria supposedly lives at 210 Prince Street, a house that will be featured in this weekend’s garden tour. The Barrett Branch Library's Alexandria history collection is full of old news clippings about a ghost that supposedly haunts the house, one that has a Revolutionary War era hatred of anything English. Legend has it that the ghost has been seen walking down a stairwell in the house in an American uniform. One famous 1930s-era account has the ghost preventing a British woman from walking upstairs when the house was for sale.

"I don’t normally believe in ghosts," said Virginia Rocen, who purchased the house with her husband, Donald Rochen, in 2006. "But I could change my mind if I heard something. Couldn’t we all?"

Guests at this year’s Alexandria stops on the Historic Garden Week’s 76th annual season will see knockout gardens and all manner of architectural ghosts. Sites include cobblestones harvested from Fairfax Street, windowsills believed to be from one of George Washington’s quarries and the parsonage of the Free Methodist Church. Catered lunches will be available at the Athenaeum, ranging from $11 to $17. Light refreshments will be available at St. Paul’s Episcopal Church during tour hours.

"I think this year’s tour has some nice variety of structures," said Michaela Robinson, a member of the Garden Club of Alexandria who is acting as co-chairwoman of the event. "So often a tour like this focus on grand homes, and of course we have grand homes. But this year’s tour has a nice balance between large homes and small homes."

&lt;li&gt;&lt;b&gt;207 North Fairfax Street:&lt;/b&gt; Built in 1749 by John Dalton on the first lot auctioned in Alexandria, this house was situated on the river’s original bank along what is now Lee Street. Dalton acted as agent for the Mount Vernon produce and was a partner in the firm of Carlyle & Dalton, a mercantile and shipping business in Alexandria. The house was purchased by the present owners in 1980, when it was an unoccupied crumbling shell surrounding six very small apartments.

&lt;li&gt;&lt;b&gt;210 Prince Street: &lt;/b&gt;Revolutionary War hero Michael Swope completed construction on the Georgian brick townhouse in 1786. The lot at 210 Prince Street, originally purchased by George Washington’s half-brother Augustine Washington in 1749, was bought by William Ramsey in 1751. In the next three years, the house more than doubled in value, leaving many to speculate that a brick &quot;flounder&quot; was built on it in 1754. The present owners have added a small powder room off the dining room and have restored the dining room fireplace to its original arched brick design.

&lt;li&gt;&lt;b&gt;426 South Lee Street:&lt;/b&gt; This frame house was constructed prior to 1879, when owner George Peverill built the Free Methodist Church at 424 South Lee Street. For many years, this house was the parsonage for the church. One noteworthy furnishing is an American chest of drawers probably built in Baltimore made of &quot;plum pudding&quot; mahogany that has been in the owner’s family since the early 1800s.

&lt;li&gt;&lt;b&gt;510 South Fairfax Street:&lt;/b&gt; Built in 1804, this federal townhouse has been the home of the current owners for more than 25 years. The hall and library are the original house, which was built when Thomas Jefferson was president. The exit leads to the front patio and parking area paved with cobblestones harvested from Fairfax Street when it was repaved.

&lt;li&gt;&lt;b&gt;513 South Fairfax Street: &lt;/b&gt;This early 19th-century brick federal residence has a mix of historicism at the original body of the structure and a wide-open modern family living space. Matching chandeliers are Czechoslovakian and mimic colonial lights but with a nod to the contemporary, made of crystal instead of the typical brass. The rear garden is designed with serpentine planters fitted around the preserved trees that were carefully protected during construction.

&lt;li&gt;&lt;b&gt;307 South St. Asaph Street: &lt;/b&gt;The two houses at 307 and 305 South St. Asaph Street were probably constructed by 1790 because their lots were purchased around 1785. Benjamin Shreve built 307, which was purchased in 1854 by Richard Huck. Federal military authorities seized the building in 1862 to house federal soldiers and escaped slaves. The original exterior windowsills were uncovered and are believed to be from one of George Washington’s quarries.&lt;/li&gt;

&lt;li&gt;&lt;b&gt;201 Prince Street: &lt;/b&gt;The Athenaeum is a textbook example of Greek Revival architecture, with its Neo-Classical portico featuring Doric columns and towering windows that flood the building with natural light. The structure was built in 1852 to be the Bank of the Old Dominion. Today the Athenaeum is home to the Northern Virginia Fine Arts Association and is used for arts exhibits, performances, lectures and special event rentals. &lt;/li&gt;

&lt;li&gt;&lt;b&gt;228 South Pitt Street: &lt;/b&gt;Although 2009 represents the 200th anniversary of St. Paul’s Episcopal Church, this Gothic-style façade was not completed until a few years after a splinter group left Christ Church in 1809. The original version of the design was created by famed architect Benjamin Henry Latrobe, architect of the Capitol. In 1906 the east wall was partially removed to allow for the addition of a new recessed chancel.&lt;/li&gt;