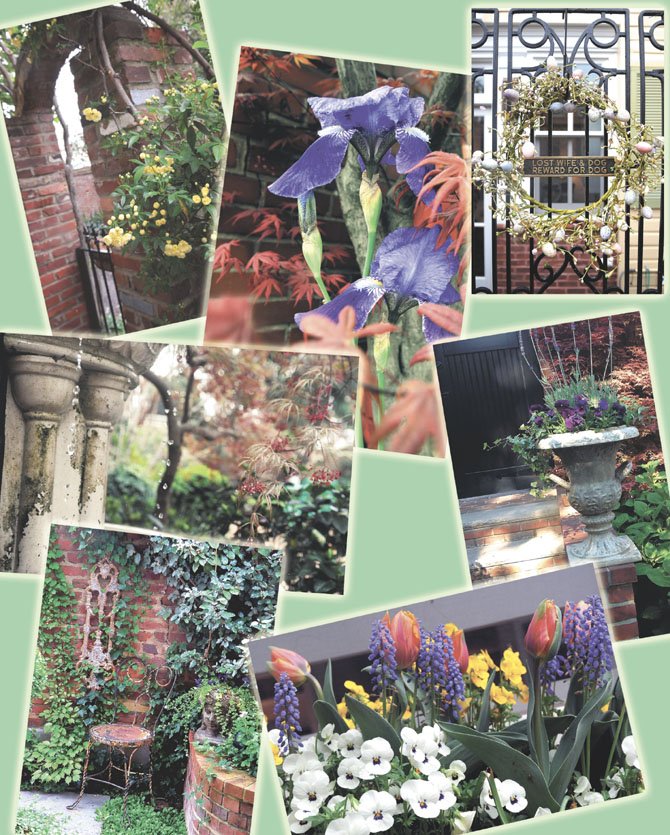 Tickets: $40, full ticket on tour day includes six private houses and gardens, refreshments at St. Paul's Episcopal Church and all-day admission to nearby historic properties. Group tours for 10 or more people and tickets purchased in advance are $35. Single site ticket, $20. Full tickets for children under 12 are 420. Children younger than 17 must be accompanied by an adult.

Refreshments: Complimentary light refreshments available at the Old Presbyterian meeting House, 323 South Fairfax St., from 11 a.m. to 3 p.m. on the day of the tour.

This Italianate style Victorian residence was probably an early public building along the 18th century waterfront. The south faÁade indicates early window and door configurations, which are "ghosted" in the old brick patterns. Mid-19th century architectural and interior trim details are from Victorian pattern books (1850 to 1875). These details, including the prominent bracket cornice, pierced metal door and window hoods, interior transom window and hand carved interior window trim in the entry, living room and dining room, indicate a major renovation during that time period. Also at that time, wood burning fireplaces were replaced with coal fireplace heaters. From 1902 to 2009, the home was occupied by the Bernheimer family who made some major improvements during the 1930s, most notably, adding second floor plumbing. The current owners completely renovated the home and garden in 2010, opening the kitchen to a new family room and walled garden. The garden features a large split boxwood salvaged from the original garden and a privacy hedge of Russian olive trees. Ken and Esther Carpi, owners.

The lots on which the dwelling and garden sit were purchased by Lawrence Washington in the original Alexandria land auction of 1749. He subsequently lost title when he failed to build within the required time. The property was later acquired by Dr. William Brown, Physician General in the American Revolution, friend of George Washington, fellow officer at Valley Forge and author of the first American "Pharmacopoeia." The emphasis in this elegant shade garden is on color, texture and spring blooms. Many of the boxwood and azalea plantings were present in 1969 when the current owner purchased the property. They were later moved when the gate was relocated from the side of the house to its present location. The small brick building at the back of the garden, once a smoke and spring house, is original. The patio was constructed using brick pavers excavated from the rear of the property near an old stable that is shown on an early map. Cobblestones, which were also unearth, were given to the city to use for repairing Alexandria's two cobblestone streets. The orangery was constructed by the current owner in 1991. Also of note are the espaliered ginkgo trees along the driveway. Mrs. Frank H. Wright, owner.

The central portion of this Federalized Victorian was likely built during the first quarter of the 19th century. Alexandria required that residents build on their lots within two years of possession. Originally, the dwelling unit would have been entered by the side door that today provides access to a closed alley. In 1850, the home was signifi8cantly enlarged and an adjoining mirror image home was built for the two married sisters. The two properties were connected via a doorway at the top of the back stairs. In 1949, the dwelling was renovated by the Armfield family and an English garden replaced old dog kennels, which were used by the previous owner for their hunting dogs. In 1999, the kitchen was completely renovated by the current owners. Legend says that the house was visited each Christmas by the spirit of a mid-19th century gentleman. His visits ended when a new doorway was built between the living room and dining room. In the garden, the boxwoods planted in 1950 still thrive. A large triple trunk 4river birch shades the dining patio. The garden features specimen plantings of dwarf loropetalum, snowball viburnum and hydrangea. Mr. and Mrs. George Boteler, owners.

This 19th century Greek Revival townhouse is built on the foundations of an earlier house which was destroyed by fire. On Jan. 4, 1871 at 11 p.m., a fire broke out in Frederick Schwoop's bakery at 210 Wolfe Street destroying the bakery and several adjacent structures, including 206 Wolf. The owner, a seaport captain, did not rebuild and subsequ3ently sold the property two years later. The current home was later rebuilt and has undergone multiple renovations, most recently last year. The result is a lovely, warm, bright and open interior. In 2010, the owners added a sunroom and outdoor porch off the master bedroom. The floor in the sunroom was purchased in Marrakesh during one of their travels. The garden features a Haddonstone fountain and understory trees such as Sweet Bay magnolia, Acer griseum, Stewardia pseudocamillia, camellias, poenies, boxwood, spring bulbs and Japanese perennials. This garden has evolved over the past 12 years under the stewardship of the owner who is a retired horticulturalist from the U.S. Botanic Garden. It has also expanded into the cobblestone lane beyond the garden walls. Betty and Ed Spar, owners.

This fine traditional brick town home was built over 30 years ago. Sited back from the street, raised beds in the front of the home feature hosta, daylilies, hydrangea and colorful annuals shaded by a mature cherry tree. During the last 10 years the owner has completed major renovations including second floor bedrooms and baths at the back of the first floor, an open an inviting new floor plan. The kitchen now opens to a dramatic volume ceiling in the family room with a stone fireplace and views of the garden. The owner has transformed the previous Japanese garden to a more casual space, adding traditional Virginia plantings while retaining a specimen Japanese maple. Also featured around the flagstone and brick terrace are cornus florida, rhododendron, crepe myrtle, peonies and a styrax. In addition, the owner converted a potting shed at the back of the property into a bar area with architectural arbor and a fountain to create a lovely outdoor entertaining area. A brick walkway on the south side of the property leads to a glass conservatory which floods the kitchen with natural light. Shelby Scarborough, owner.

This fine 18th century home was last on the Historic Garden Week Tour in 1955. This property dates to 1782 when a free-standing dwelling was constructed on five lots. The original owner was the son of John Alexander, for whom the city is named. In the living room, the original windows and fireplace mantel can still be seen. It was not until 1966 that the large west addition was constructed. Recently, the home was completely renovated by the current owners offering a spacious family room opening to the expansive gardens. In 2010, the gardens were refreshed by noted landscape designer Jane MacLeish. Known as the Sally Ann Gardens, they consist of four areas: The parterre garden with Korean boxwood, tulips and hollies, the East garden featuring euonymus and sarcocci shrubs, the North garden lined with American holly and filled with hydrangeas and the West garden, composed of azaleas, euonymus and crepe myrtle. A side walkway is lined with magnolias, azaleas and acuba. There are more than 50 boxwoods throughout the gardens, some dating back 60 years. Mr. and Mrs. Gene Jankowski, owners.

Other places of interest are also included in the Historic Garden Week ticket. Please note, tour tickets are not sold at the following locations:

Carlyle House Historic Park, 121 North Fairfax Street. When Scottish merchant John Carlyle completed his riverfront house in 1753, this was the grandest mansion in the new town of Alexandria. The stone architecture, furniture and decorative finishes reflect Carlyle's status and wealth. The Garden Club of Virginia restored the front landscape to the mid-18th century period. A lovely garden with a boxwood parterre graces the rear of the house. The site is owned by the Northern Virginia Regional Park Authority. Guided tours are offered 10 a.m. to 4 p.m. on the tour date. Visit www.nvrpa.org.

George Washington's Mount Vernon Estate and Gardens, 8 mi. south of Alexandria on the George Washington Memorial Parkway. Situated on the Potomac River, Mount Vernon was the home of George and Martha Washington. From the end of the American Revolution in 1783 to his election to the presidency in 1789, Washington replaced outbuildings, reshaped gardens, created new lawns, planted trees and even realigned roads and lanes. The George Washington Pioneer Farmer Site features a distinctive replica of Washington's 16-sided barn and displays of his farming principles. With funding from Historic Garden Week, the Garden Club of Virginia has helped to restore Mount Vernon's bowling green, one of the major landscape features on this vast plantation. The Mount Vernon Ladies Association owns the property. Visit www.mountvernon.org.

American Horticultural Society at River Farm, 7931 East Boulevard Drive. The headquarters of the American Horticultural Society overlooks the Potomac River and was one of George Washington's original properties. The property is comprised of 25 acres of gardens and grounds, which include perennial borders, annual beds, children's gardens, a meadow, a woodland, and picnic areas. The estate house was remodeled in the early 20th century and the property is described as a "gentleman's estate." Large porches offer a panoramic view of the Potomac River and gardens. Open 9 a.m. to 3 p.m. Visit www.ahs.org.

Woodlawn. 9000 Richmond Highway, 3 mi. west of Mount Vernon at the intersection of Rte 235 and U.S. Rte. 1. This Federal mansion was built on 2,000 acres that George Washington carved from Mount Vernon when his wife's granddaughter Nelly Custis married his nephew Lawrence Lewis. Designed by Dr. William Thornton, the first architect of the United States Capitol, the house contains fine Federal period furnishings, many brought from Mount Vernon. The garden was restored by the Garden Club of Virginia in 1958-60 and is owned by the National Trust for Historic Preservation. Open 10 a.m. to 4 p.m. Visit www.woodlawn1805.org.

Gunston Hall Plantation. 15 mi. south of Alexandria off U.S. Rte. 1 on Rte. 242. This 550-acre National Historic Landmark was the home of George Mason (1725-92), author of the Virginia Declaration of Rights. The estate consists of a Georgian mansion, ca. 1755, and reconstructed kitchen, dairy, laundry and schoolhouse. The brick mansion exhibits elaborately carved woodwork enhanced by furnishings of the colonial period. The Potomac River is viewed through the original Deer Park. While no longer a restoration project of the Garden Club of Virginia, the Club assisted Gunston Hall with landscaping work in 1949-53. Open 9:30 a.m. to 5 p.m. Visit www.gunstonhall.org.