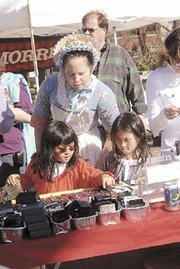 Melanie La Force browses the vendor booths with her daughters Kristen and Jocelyn at the National Tartan Day festival held at Market Square.

Members from the Royal Scottish Dance Society of Northern Virginia dance to the music of the Scottish Celtic Band ‘The Devil’s Tailors.

Rod Clarke recalls some of the history. The first National Tartan Day celebrating Scottish ancestry in the United States was celebrated in 1997.

Amy Cowsert and Mario Turner enjoy the warm afternoon and the music in the Square.

The National Capital Tartan Day Committee held its festival at Market Square on April 4. National Tartan Day, which officially falls on April 6, celebrates Scottish heritage and the anniversary of the Declaration of Arbroath.

The declaration, a formal declaration of Scottish Independence, was written in 1320 by the abbot of Arbroath and chancellor of Scotland, Bernard de Linton, and sent to the Pope John XXII on April 6. The declaration was authorized by the Scottish king Robert the Bruce.