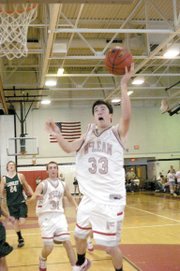 Sean Fitzgerald, who recently accepted a scholarship to play baseball at Notre Dame, is a key member of the McLean High basketball team this season.

The first watershed moment every year for the McLean High boys' basketball team is its pre-Christmas game against local rival Langley. Highlander players and fans always look forward to the Liberty District matchup against the Saxons. Whether the contest is played at McLean or at Langley, the gymnasium is filled to capacity and the energy level is sky high.

The two teams were scheduled to meet on Friday night, Dec. 18 at Langley as part of a girls'-boys', double-header evening of basketball. The girls' game was to be played first, followed by the boys' contest.

"In the beginning of the season, that's what the kids can really point to on the schedule," said McLean boys' head coach Kevin Roller, of his team's first of two regular season meetings against the locals from Great Falls. "That's sort of a great way to end the first month of the season."

The coach said he has talked to his team during practices about how to best handle the high decibel crowd noise when his team takes the floor against Langley. It is often difficult for players on both teams to hear and talk with their own teammates because of the loud cheers or jeers.

"We've already talked to them about how we're going to communicate with 1,800 [people in the stands] screaming," said Roller, who said Langley coach Travis Hess always has the Saxons ready to play at a high level of basketball. "It's a game I really look forward to as a coach."

Last season in the first pre-New Year's game between the McLean and Langley boys, the visiting Saxons defeated McLean in a thrilling, double-overtime affair, 50-47.

"When you play McLean, it's going to be a great game every single time," said Hess, the Langley coach who led the Saxons to their second consecutive district title last year. "Kevin [Roller] does a great job changing defenses and their offense is very good. It will be a close game. Anything can happen when McLean-Langley play."

As it has turned out the past two years, the two cross-town opponents ended up meeting at the postseason district playoffs. Last year, Langley defeated McLean in a semifinals matchup before going on to upset top seed Woodson in the finals. Two years ago, the Highlanders and Saxons met in the finals with Langley coming out on top.

"We only returned two players who had significant playing time [last year]," said Roller. "Both of them are playing well."

McLean, going into its Dec. 18 game against Langley, stood at 2-2 with the wins coming over Battlefield High (Haymarket) of the Northwest Region and Northern Region opponent Falls Church. The losses have come to Northern Region foes Westfield and Yorktown.

The games against Battlefield and Westfield were part of the Langley Tip-Off Tournament, the Saxons' early season, four-team round robin tourney.

Bouchard scored 20 points with nine rebounds, along with two blocked shots and five steals, in the win over Battlefield, and he tallied 12 points and eight boards in McLean's victory over non-district opponent Falls Church. Against Westfield, the Highlander standout had 12 points and five rebounds.

"He combines height, speed and strength and is probably the best athlete we have," said Roller, of Bouchard. "He put a lot of time [into the game] this summer."

Foul trouble for Bouchard hurt the Highlanders in their 68-46 loss at Yorktown on Dec. 11.

"He needs to play well and be on the floor," said Roller.

Bouchard usually matches up against bigger opponents at his forward position. Defensively, he more than holds his own against talented frontcourt players. On offense, he utilizes his quickness to drive past defenders. He also has developed a better outside shot.

"He has a much better understanding in how to play defense than last year," said Roller. "He's got good hands and quickness. On offense, he is much more of a face-up player and has improved his jump shot. He creates mismatch problems for opponents."

Fitzgerald, meanwhile, is another solid, go-to type of player for McLean. He is a good all-around basketball player, but his best sport is baseball. Fitzgerald recently earned a scholarship to play baseball at Notre Dame. Last spring, he helped lead McLean's baseball team to the district title.

"He's a big-time athlete and a big-time baseball player," said Roller, of Fitzgerald. "He's been a steady influence for us."

Two sophomores have handled the point guard duties for the Highlanders over the first part of the season - Gordon Rogo, a varsity back-up player last year, and Sango Amolo, who ran the McLean JV team's offense last winter.

"We have two point guards in the rotation and they are both maturing," said the coach.

Amolo scored nine points in the loss to Yorktown, while Rogo contributed six.

Roller said his team has had both good and bad stretches of play.

"We've had some very good flashes in our first four games, and at other times our lack of varsity experience has shown up," he said. "We need to consistently play 32 minutes of varsity basketball, which should happen when guys [better] learn their roles."

McLean will participate in the Wooton High Holiday Tournament after Christmas. The Highlanders will meet Rockville High in their first tournament game on Dec. 29.